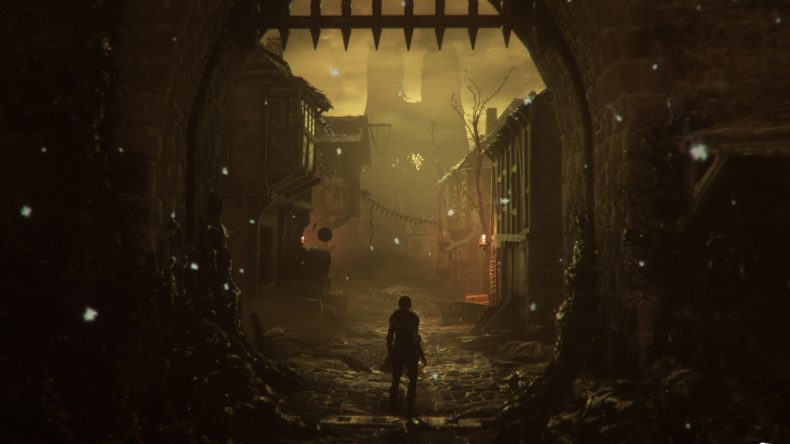 Growing up, I was something of a weird kid, eschewing the standard boyhood pets like hamsters and gerbils for a black rat named Racso (having read the Nimh novels I felt myself terribly clever to have come up with such an awesome pop culture reference at the age of 11). I shared around four wonderful months with Racso, largely avoiding his little razor teeth and wondering why his eyes had to be quite so viciously pink, before he chewed his way out of his cage and was literally scared stiff by the family dog. Needless to say such insider knowledge of the behaviour of the Rattus Rattus has never really come in all that handy until this past week, wherein it has allowed me to debunk A Plague Tale: Innocence’s depiction of rats as light-phobic hive-minds that would rather starve than dip a single claw into a pool of luminescence. In fairness, though, I’d be more angry at Focus Home Interactive’s new stealth adventure if its bastardisation of this most common of rodents wasn’t an utterly terrifying creation.

Staying true to its title, A Plague Tale is exactly that: a story set in France during the Hundred Years War when the Black Death was claiming lives by the hundreds on a daily. You play the part of Amicia de Rune, eldest child of the wealthy de Rune family whose parents are murdered by the dastardly Inquisition in their pursuit of 5-year-old Hugo de Rune, Amicia’s little brother whose blood appears to carry a pure strain of the plague. Your role is to keep Hugo alive and escort him across the corpse-strewn, blood-drenched, rat-infested countryside to supposed safety, all while avoiding English soldiers and horrifying masses of red-eyed plague rats. There’s no real combat to speak of in A Plague Tale, which seems odd to a long-time gamer used to taking untrained peasants to the skill level of ninja warriors over the course of a single playthrough, and especially considering that their are swords and shields everywhere and your enemies are mostly stupid. Instead, Asobo Studios have opted to go down the pure stealth route and have produced something that feels like Dishonored with all the gruesome murder taken out and replaced by people getting eaten alive by rats. Well, people, pigs, horses – the rats are apparently not fussy.

What they are, though, is extremely phobic of light. So phobic in fact, that many of the environments treat pools of light like traffic islands. There are two sides to A Plague Tale: the first side, we’ll call it the left, sees you avoiding enemy patrols by causing distractions. Amicia is very handy with a sling, and will use pebbles she finds (not on the ground but rather in handy little bags for some reason) to create noise, extinguish light sources, or break chain links to create walkways or open up routes. The left side of the game is pure stealth as you sneak around soldiers, hide in tall grass, throw pots that cause them to investigate and, very occasionally, stone them to death with a well-placed pebble. There are a handful of enjoyably inventive boss fights throughout, such as an early encounter where you must deal with an armoured enemy who you’ll need to dance around in order to expose the links that hold his armour on, break them to expose his forehead and then plant one right between his eyes – which is for some reason easier than picking up a sword, waiting until his giant weapon gets helpfully stuck on the scenery again and then shish-kebabing his jugular from behind.

It’s oddly empowering in the same way that early kills in the Tomb Raider reboot are empowering, because like Ms. Croft, Amicia constantly sounds two shocks away from a full-blown asthma attack and says things like “come on” and “you can do this, Amicia” over and over again. It’s also quite fun from a gameplay perspective because it feels very different to simply slashing and evading, and makes far more sense in the context of the game-world. Amicia is no warrior and is never going to become one, but she is a fighter and refuses to accept defeat. A Plague Tale: Innocence doesn’t have the best moment-to-moment dialogue, but at the very least Amicia is endearingly scrappy. The other side of the game, which for consistency we’ll call the right, comes closer to lightweight horror. Whenever the rats appear, sometimes pouring from drains, exploding from the earth like fountains of crude oil filled with teeth, or bursting wetly from within the writhing belly of a dead cart-horse, the tone changes. You don’t need to sneak around the rats; the furry little bastards know you’re there and if you stray too far from the light they will insta-kill you with a hundred pairs of dagger teeth. Instead you’ll need to create pools of light and lily-pad your way around environments like a nervous frog with a gammy leg. Amicia, with or without Hugo, is distressingly slow in these situations, especially when you have a torch made from a burning stick that will fizzle out in scant moments. About a third of the way through you’ll acquire an ignifer, which will let you craft burning shot to ignite nearby sconces, lamps or fire pits, turning each environment into a mini stealth puzzle. And later, as Amicia’s alchemical arsenal fills out, you’ll begin to revel in the growing list of options.

Sometimes you can distract the rat hordes with hunks of ham, but at one rather uncomfortable point you’ll need to lead a hapless piggie to its death to secure your route through an infested barn. Now and then it’ll be corpses instead of ham, too. Later, the left and right converge more and more often, and you’ll be able to knock out a guard’s lamp and then sneak by while the rats are chewing the ever-living shit out of him. It’s quite a horrible thing to watch, and an horrific thing to actually do, but while Hugo is initially horrified by his sister’s callous actions, Amicia herself visibly hardens to it with every reluctant kill she’s forced to perform to protect her brother.

As you progress you’ll unlock new sling shot and projectiles, such as a compound that melts helmets and a fire bomb that will temporarily clear rats. My big gripe here though is that Amicia conceives of none of these inventions and upgrades on her own, and is instead simply handed them by the various NPCs who travel with her for certain portions of the story. It’s a personal complaint, I suppose, but I’d rather see Amicia using her own ingenuity to overcome problems instead of just being handed things and told where to throw them. There are crafting ingredients scattered around the landscape which you’ll need to harvest to create ammunition on the fly, or upgrade your gear at a workbench (at first you’ll wonder why there’s so much sulphur and pure alcohol lying around, but after a while you’ll sort of just accept it). Upgrades include bigger ammo pouches, a more accurate sling and softer boots for easier sneakery. It’s a simple enough system, its uncluttered structure indicative of A Plague Tale’s refreshing design. This is not a game about systems heaped on systems, and its simple approach to old school stealth mechanics is both restrictive and welcome at the same time.

It’s also bloody gorgeous on the Xbox One X. Outdoor environments have a watercolour quality; the swaying of the grass, the spitting rain, the blood-red sunsets. But the cloak of devastation that covers the land in scorch marks and viscera rarely let’s you forget that this is a country at the mercy of a tyrant and in the grip of one of the most harrowing pandemics in known history. Death is everywhere, and in fact becomes such a constant companion to Amicia and Hugo that both start to become numbed to it in the later game. There’s so much detail in the environments that it’s almost a shame you’re persistently dragged forward by the pace of the story; you rarely get to linger anywhere and some moments, such as an early morning walk beside a tranquil river, feel inviting in their serenity. But these moments are not to last, and really only exist as a stark contrast to the scene of horror that will surely follow. Like in those games where you know a sudden generosity towards ammo and health kits means a boss fight is looming, A Plague Tale does the the same with moments of beauty, each one followed promptly by something horrific.

Character animations have a slightly unreal quality to them at times, and while the voice acting is mostly on point (Hugo is a little saccharin for my tastes but I think that’s intentional), the lip-syncing and movement is a bit off. It doesn’t hamper the story and the persistent atmosphere of dread, interspersed with shocks of ragged beauty, make up for it. The story is actually one of the most appealing aspects in A Plague Tale: Innocence. It starts simply (and darkly) enough, but as more characters are added, several unexpected twists and genuinely emotional moments build towards a macabre and fateful showdown. One issue that’s incredibly annoying but which I’m sure is deliberate is the ally AI. Through much of the game you’ll travel with other characters instead of or as well as Hugo, and though they’ll watch you use a burning stick to carve a path through the rat swarms, they simply won’t do the same, and you’ll often have to wait for them to join you before proceeding or, as I did at a few very irritating points, go back for them because you left them behind and they cannot act autonomously. It adds to the sense of agency, but it doesn’t make a lot of sense.

As with many games to bolt out of Focus Home’s stables, A Plague Tale: Innocence aims high but falls just short of its lofty goals. That said, your enjoyment of it may well be determined by your ability to overlook some of its “gamier” tropes, such as the on-the-spot crafting, or the disturbed guards who search the area under their nose really thoroughly for a solid minute before concluding loudly that they saw nothing and returning to their patrol route, or the fact that there isn’t a problem in the whole of France that can’t be solved in some way with a sling.

But what I will award A Plague Tale “props” for, as the kids would say, is its simple complexity. It presents a compelling plot, grounded characters who aren’t instant heroes because they pick up a sword, crafting and upgrades without an arbitrary levelling system bolted on, and some beautiful environments to solve your way around, filled with gruesome shocks and flashes of macabre grandeur. There’s a hint of old school Thief about the whole affair and, despite some unobtrusive flaws, it’s refreshing to just play through a game with a beginning, a middle and an end that doesn’t bog itself down with money-spinning microtransactions or half-baked ideas.

A compelling plot, grounded characters who aren't instant heroes, crafting and upgrades without arbitrary levelling and some beautiful environments to solve your way around,