Death Inc. Preview – Who Said “The Plague” Was Black? 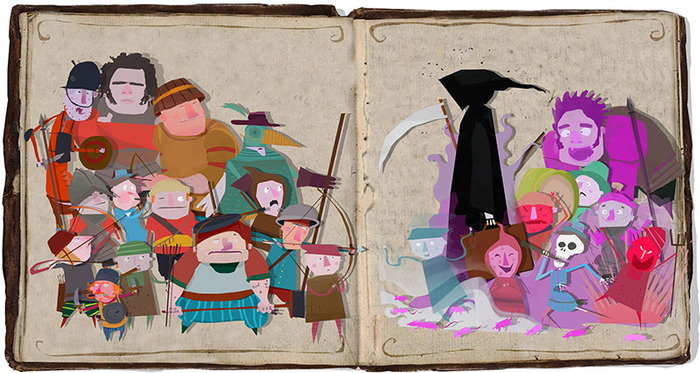 Death Inc.’s Kickstarter Campaign may not have been successful, but it has risen from the grave into a playable build. In this case, everyone can get in on the action in the game’s current alpha build. Ambient Studios, a studio founded by members of Media Molecule, Lionhead, and Criterion, has kept their game alive by using a more direct funding model. Paying $10 or more (here) will give you access to both the alpha and, in November, the finished game.

We were recently given a chance to roam through the two available alpha levels in this real-time strategy-come-god game-come-business simulation and get a feel for the real-time strategy elements. The goal was get to the Nobleman and, honestly, he had it coming.

Death Inc. casts you in the role of Grim T. Livingstone, a grim reaper of course. Livingstone’s goals are mild, he only wants to be the world’s most famous grim reaper. His business, and your objective, is to harvest souls in England duding the 1660s. As would be expected in a game from people involved in creating Little Big Planet, the world is colourful, as are the characters. 1660’s period England just happens to be right during the bubonic plague. It’s like the World Cup of soul harvesting and you will get a chance to lead an infected army to go after higher and more prestigious characters, like the Nobleman. There are currently two available skirmish maps: one during the day and one at night time. The emphasis here is on using the strategy elements available to you to harvest souls by unleashing the plague (in gloriously colourful fashion). While getting to the Nobleman is the goal, you have to be watchful of the countdown clock. Harvesting is the key to both increasing the time on the clock and building your army. The layouts will make you want to review your map before planning your raid, but the time clock means you have to do it quickly. You get the ability to summon plague-like powers, and in this build I unleashed several infected rats or birds on unsuspecting peasants. As morbid as this may seem, there is a guilty pleasure in knowing its just a game. This power regenerates too, so if you’ve played games like Pikmin or Little King’s Story, you have an idea of how the game works in controlling an army and attacking. Infect some peasants, use your peasants to infect more and more, paint a colourful path for your army to follow, get to the final capture, and finish the level.

The one complaint I’ve got about the design structure is that the tutorial is given before you ever get into the level. Being a hands-on person, I wish the tutorial elements were mixed in a tutorial stage to get a better feel. After my first unsuccessful playthrough, I closed out just to go back and re-read the tutorial after having an initial crack. Death Inc. also features leaderboards so you can see how your friends are doing and laugh at them when they fall below you.

My time with Death Inc. was brief, but I saw enough to make me want to play some more, with the RTS elements seeming to be the crust of the single-player campaign. With both maps being short and to the point, it will be intriguing to see how future challenge maps may expand the strategic elements. The aesthetic or humour are additional selling points, and there is much content and variety promised. If the game ever finds a way to get released, I’ll be there to check it out.

Ambient Studios has now closed its doors, so the future of this game seems dark