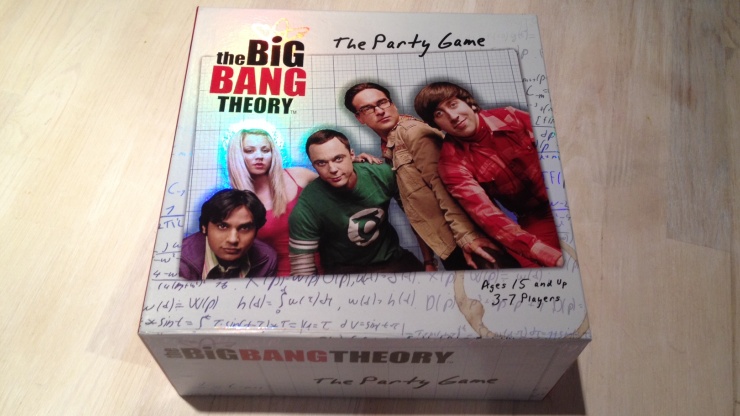 Have you ever turned on E4? If you have, no doubt you’ll be aware of the cultural phenomenon that is The Big Bang Theory – a show about four “nerds” and the adorable airhead who lives across the hall from them.

It’s a show that’s been both glorified and criticised for it’s portrayal of geek culture: the frequent references to obscure video-games and comics set against the patronising way other character’s deal with them. Whatever your thoughts on the programme, however, you’ll be able to enjoy The Big Bang Theory Party Game – even if it is by far a different tabletop game than Sheldon’s beloved Warlords of Ka’a. This nails exactly what a party game should be: incredibly easy to pick up and play. Nothing puts people off more than waiting for someone to explain all of the rules and setting up, but with this you can be playing in seconds.

Gameplay revolves around two decks of cards, one red, one blue. The red deck contains “Experimental” cards, basically a series of scenarios such as “handy in case of Apocalypse”. The blue cards meanwhile are “Theoreticals”, a series of things that could be applied to each situation on the red cards – Magic Beans, or Mother Nature, for example. Each player draws seven cards from the blue deck at the start of play and the first referee is chosen. The referee turns over the top card from the red deck and reads it out and the turn begins. All players choose a card from their hand that they think fits the scenario and places it face down on a pile in front of the referee, who blindly shuffles them. The referee then reads out each answer and ranks them best to worst with some points tokens included in the box.

Here things could fall apart, as there’s no clear indicator of what a good answer should be, bar that it should be played from the ref’s perspective. Largely it will depend on your hand what you play, but funny answers and actually decent answers are in the deck frequently enough that in a seven-card hand you’ll likely have an opportunity for both. It boils down to who you’re playing with, and playing for laughs is much better than truly competitively. One option the instructions suggest is playing as a character from the show, although in the games I’ve played I never felt we needed to.

At the end of a turn the tokens are given to the respective owners of the cards and the referee passes to the next player and everyone draws cards until they have seven again. The game ends when all tokens have been dealt out, with player’s totting up their scores. Just the basics are fun in themselves, and there are plenty of cards in the box for multiple play-throughs without seeing the same ones, but a couple of twists raise the game.

Mixed in with the blue cards are four “Bazinga!” cards. These can be played during any round, after each player has passed an answer to the ref but before they are revealed, replacing the current Experimental card with the next one from the deck. Best used when you don’t have a fitting answer to the current question, these mix things up for everyone. More fun are the “Experimental Formula” cards. These are shuffled into the red deck and require two blue cards for an answer – for example there’s The Ultimate Hybrid, which you could answer with Jealous Ex + Scrotum Raccoon using the handy card wallets given to each player. Again it can lead to some genuinely funny combinations, although when brought out by a Bazinga! card they can halt the flow of the game.

The cards themselves look quite nice, with a picture from the relevant moment in the show along with a small quotation that references whatever’s on the card. It’s a neat touch for fans – who will understand most of the things mentioned – but they’re not intrusive enough to put people off who haven’t seen the show. Another nice touch are the blank cards left to fill in yourself, either from your imagination or references from later seasons of the programme.

And that’s about it. The Big Bang Theory Party Game does everything a party game should do, being easy to pick up and play while also being entertaining enough to actually get out at a party. It helps that you don’t need to be a fan of the show – or to have seen it at all – to enjoy it, although the number of risqué cards means this isn’t one for kids or to play on Christmas Day with your Gran.