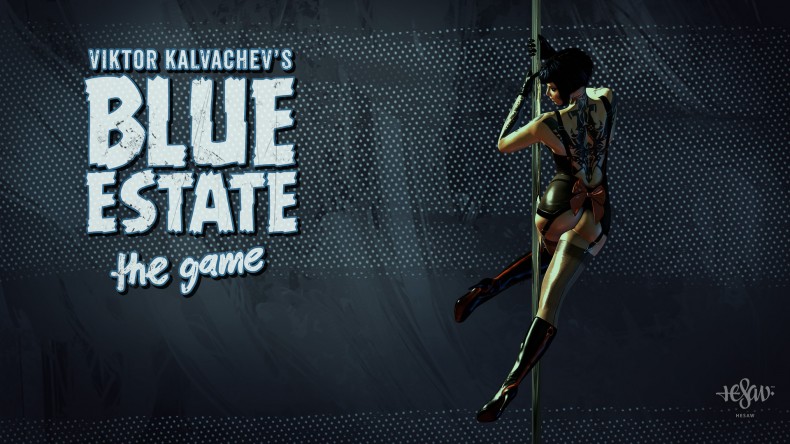 Blue Estate, the on-rails rail shooter developed by Hesaw and based on the Eisner Award-nominated Blue Estate comic books from Viktor Kalvachev, will be available next month, via the ID@Xbox self-publishing program.

Blue Estate will be the first on rail shooter of this current generation.

Designed from the ground up to integrate Kinect for Xbox One motion detection capability. Blue Estate aims to offer previously unmatched immersion into the mafia world of Los Angeles. It promises to be packed to the gills with humour, stonkingly original gameplay and incredible fun.

You play Tony Luciano, the homicidal maniac son of LA’s crime boss Don Luciano, and Clarence, a broke ex-navy seal who has been hired to clean up Tony’s mess. As Tony launches a personal vendetta against the Sik Brother’s gang in an attempt to save his best dancer, Cherry Popz, Clarence wants to end the gang war, taking him to the farthest corners of Jamaica!

You will be given the choice of using Kinect or the normal controller as you enter a fight for your life against the most absurd and dangerous enemies, such as scar covered champions that fight-to-the-death, Tony’s own hair and Chihuahuas that are too happy to see you.
Players are given a series of primary and secondary weapons to help make their way through the perilous missions which will come in handy defeating the bosses who’ll try to end your game and your life.
In a stunning twist, sometimes firepower isn’t enough, so think before shooting and use cover to prepare your strategy, reload often, and try not to get turned into grated parmesan (other dairy based products are available).

No need to be lonely when gunning down the bad guys! So that’s why Blue Estate offers the opportunity for a second player to join the fun, through a cooperative mode where every headshot counts.

Blue Estate will be available on February 18 on Xbox One. Xbox Live Gold members are entitled to an exceptional 20% discount.