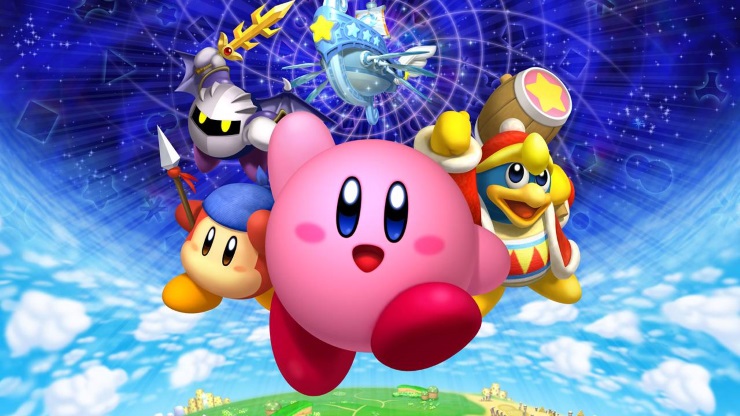 Nintendo’s roster of mascots isn’t anything to be sniffed at. Over the course of their history they’ve created countless popular franchises and given us many memorable characters. Their roster is one of the many reasons why people love the Smash Bros. series of games. They tickle those fanboy parts of us where we’re presented with a plethora of our favourite characters at one time. It’s also telling of Nintendo’s quality that they can keep bringing back these old properties again and again and again they just never seem to run out of new ideas and new directions to take them in. That’s something that Sega have never really managed to replicate. That’s not to say all of Nintendo’s mascot games have all been amazing. There’s been the odd blip, but they’re not as numerous in number as Sega’s missteps.

Kirby originally entered our hearts in 1992 in Kirby’s Dreamland on the Gameboy. He was never meant to star in the game, he was just a placeholder for a final design to take his place His designer Masahiro Sakurai had grown quite fond of the bipedal soft blob vacuum and decided to keep him. His name however is still not quite clear. On the one hand it’s said to be in dedication to US lawyer John Kirby who defended Nintendo in a lawsuit from Universal Studios in 1984, on the other he’s supposed to be named after Kirby vacuum cleaners. The latter certainly seems more plausible, but Nintendo have never been ones for the obvious.

Kirby has always sucked (not in that sense, the games have been mostly well received). Inhaling his enemies into his cavernous gob and then either swallowing them, or spitting them out as projectiles to harm other foes. It was only when Kirby starred in the 1993 NES game Kirby’s Adventure that he received his trademark copy ability. Since then he has been able to inhale and absorb the powers of certain enemies and use those to attack. It’s been twenty-three years since his first game, and in the time Kirby has been busy. Not content with strolling and jumping around, he’s played pinball, taken up golf, and even beat people up. He’s now on Nintendo’s latest console rolling around on lines that you draw for him in Kirby and the Rainbow Paintbrush. Not only this, but in continuing to provide Wii games on the Wii U via Virtual Console, Nintendo have re-released Kirby’s Adventure Wii (also known as Return to Dreamland) as they did with Super Mario Galaxy 2, Metroid Prime Trilogy, and Donkey Kong Country returns. This is where I come in.

Now, I haven’t played a Kirby game since Kirby’s Pinball Land, so it has been a long time. No reason for it, I just haven’t played them, despite owning almost every Nintendo console at some point in my life. So, it’s fair to say that while I know of Kirby and his history, his games are complete strangers to me.

Nintendo’s Wii hardware is from the same time as the PlayStation 2 and Xbox, so we’re talking two generations of hardware ago, and from my experiences of playing PS2 games through my PS3 (HD re-releases not being counted) they can tend to look muddy and unattractive when run through a machine’s native scaler. However, as is the case with Super Mario Galaxy 2, Kirby’s Adventure Wii is sharp, bright, and colourful. It’s like someone took every single happy thing in the world and crammed it into one package. It’s just another excellent example of Nintendo’s design triumphing over technical limitations. Granted, it’s hard for a spherical pink chap with arms and feet to be badly rendered, but even more detailed characters like Meta Knight and King Dedede look great scaled up to 1080p. As with Super Mario Galaxy 2 there’s some rough edges due to a lack of aliasing, but unless you’re sitting right on top of your TV you won’t really notice it.

It’s a day like any other on Planet Popstar. The birds are singing, the butterflies are flying and King Dedede and Waddle Dee are chasing Kirby who has stolen their cake. Meta Knight is relaxing on a hill soaking up some rays when a tear in space appears in the sky and a Spaceship falls through and crashes into the ground nearby. Once our intrepid foursome have recovered from their shock they run over to investigate.

The ship was being piloted by another diminutive chap by the name of Malogor, and in the process of crashing; lost several parts of his battered ship. With nary a thought of explaining how all this came about to his new found friends, he asks them to gather the missing components so he can go back home. Because they are so nice, it’s only natural Kirby and the others accept his request, and so begins their new adventure. Kirby’s world is cute and colourful. In fact I can’t remember a game where I disliked killing the enemies as much as this due to the over-bearing cuteness of it all. Each enemy felt another stab to the heart as their only crime was to be walking towards you at the time you happened to be coming along. It’s a far cry from The Order: 1886 – which is as grey and realistic looking as they come – and as such is a welcome change. As is customary with Nintendo games though, this is just the beginning. As the levels go by, the layouts become tougher, and the enemies – while still remaining cute – start fighting back.

Aside from his trademark suck and spit routine, Kirby has twenty-three different base powers during this adventure, ranging from a sword – with a rather Link-esque hat – to an Indiana Jones whip or Ninja Shuriken. Sometimes you’re provided with these by way of pick-ups in a level, normally just before a boss battle, but for the most part you’ll acquire these via Kirby’s copy ability. Many of these you can telegraph what you’ll get from the enemy’s appearance, but others aren’t quite so obvious. Some enemies will look like they will give you something, but wind up giving you nothing, I found that to be a bit of a pain as I swallowed many enemies expecting powers and getting nothing rather than spitting them out for an attack. However, much fun is to be had at the certain times you are given the opportunity to copy the abilities of shiny enemies. These bestow super powered versions of 5 of the base powers to Kirby. For a limited time you have access to screen-filling whizbangs where time stops and anything in the vicinity is basically vaporised, Kirby is one stone-cold mofo. Level design is top notch, which is hardly surprising given Nintendo’s pedigree in this genre. Each item, platform and enemy has been placed perfectly for every leap you take. They do a great job of easing you. Early levels filling you with a false sense that the game is just too easy, that it’s just for kids, while later levels see you gnashing your teeth in frustration as a rogue fire plume or unexpected enemy shaves off your final few points of health. That frustration is both lessened and exacerbated in multi-player.

That’s right, you can partake in this Kirby adventure with three other friends. Player one will always be Kirby, but your friends can take their pick of different coloured Kirbys, King Dedede, Meta Knight, or Waddle Dee. While the extra presence can assist in killing off more enemies or dealing more damage to bosses, it means lives can be lost quicker, each respawn of a friend removing a life from your count. Bizarrely, if there are no lives left, your compatriots can still continue to spawn, despite the fact that any spawns before this time use up lives, it doesn’t really make sense. The problem this creates is that if player one dies, that is it, you have to restart.

And die they shall. Each player can jump onto the back of another, or grab their feet if they’re floating past. If they do this, their other moves cannot be used until they let go. The amount of times I died due to not realising that I had jumped onto the back of my compatriot are too numerous to mention. This includes falling down holes due to misunderstanding my position, or not sucking up obstacles due to not seeing that I was holding onto their back. Considering things can get hectic on screen it can be easy to not see these things happen. That’s not to say it isn’t fun (it is),and doing things with friends or family always makes things better. A lost life becomes funnier when it’s been caused unknowingly by a friend, a feeling known by players of the New Super Mario Bros. games for sure. Worlds are divided into levels by three, four or five to a world, and capped off with a boss fight. Mid-bosses occur at irregular points throughout with the usual attack pattern methodology required for success. Kirby stalwart Whispy Woods makes a return among the end world bosses, otherwise you’re looking at a whole new cast of big bads to put out of their misery. The mid-bosses are repeated often in slightly different forms but generally require the same tactics to beat. One oft repeated boss type brings in a bullet-hell type mechanic which acts as preparation for a later level which ends up being a very welcome change in pace and style.

On top of all this platforming goodness, HAL included two unrelated bonus modes with Ninja Dojo and the Super Scope-esque Scope Shot, both modes are playable with up to four players. The former sees you throwing kunai knives at targets as they move past your field of vision while the latter tasks you to destroy mecha versions of past Kirby enemies in timed shootouts. Both modes are fun distractions, considerably more so with more players. And yet, there’s still more. Nintendo are regularly generous with the content of their titles and this is no exception, you will need to work for it, but since when has being given everything right off the bat been fun?

For someone relatively new to Kirby’s brand of platforming, Kirby’s Adventure Wii was a nice surprise, it’s a game that’s guaranteed to make you smile and make you angry in equal measure. My son, stepson, and I had a laugh jumping, floating, sucking, and slashing our way through Planet Popstar and beyond. It’s a disarmingly cute world in which the most friendly looking critter can entice you into its proximity and smack you in the face. It’s good old fashioned Nintendo fare which will instil moments of controller throwing rage at one moment, but have you smiling and dancing along when you finally beat a level. If there’s one thing I’ve taken away from my first real taste of Kirby, it’s that he definitely doesn’t suck.

A lover, not a fighter and an all round good guy (he would say that, he wrote this after all), he's happy to be here as part of GIAG.
MORE LIKE THIS
Kirby's AdventurenintendoWii

Bring Your Friends Around for Some Kirby Multiplayer in Kirby’s Adventure Wii!