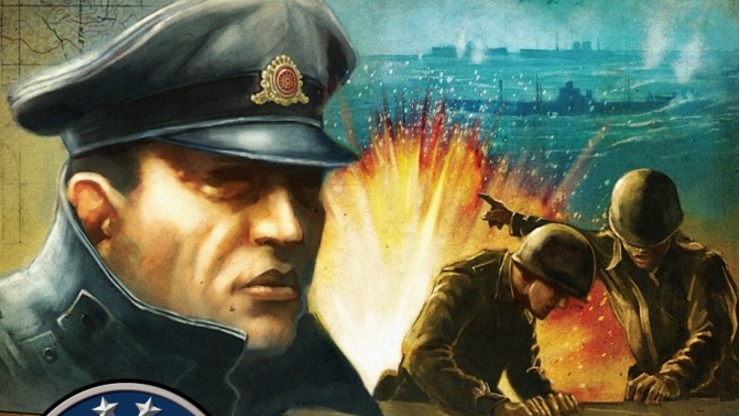 Quartermaster General charges full steam ahead into an already packed genre, aiming to conquer its own space within the crowd. Let us be clear, the subject of war as far as board games go could have its own shop that would continue to grow year by year with ease, so this one already has a battle to fight out with the confines of its own world map board.

The other option is to conquer and hold two of the home bases of the opposing force for one whole turn, which sounds a whole lot simpler than it is in practice – and you will practice a lot. Quartermaster General is game with the potential to have so many different outcomes, with so many different ways to play and such varied tactics, that in order to really appreciate what it brings to the table, it needs to be played multiple times just to understand what the game has to offer.

The first thing to note is that no matter the number of players who play, be it two to six, all six of the Allied and Axis nations take part in the game. If two players play, then it’s a simple split between Germany, Italy and Japan as the Axis side and Russia, the USA and UK on the Allies. If more play, then the players will be allocated one or two countries to control, up to the point where having six players mean that everyone has their own country to control. Every player is given their own deck of cards and their own set of little wooden tanks and boats. The deck contains cards which you play as an action during your turn, and you use the wooden pieces to mark where you army controls and therefore where you are collecting victory points.

Firstly, the different countries have varying number of tanks and boats. Japan has a larger naval fleet than an army, while the might of the Russian army is more tanks than boats. It doesn’t just end there though as the card make up for each country varies significantly as well. There are eight different types of cards. Sea and Land Battles allow you to remove an enemy piece from the board. Build Army and Navy cards allow you to do just that, as long as you keep the supply chain linked, so prevents you building halfway across the world to capture territory.

Event cards bring a one off event when discarded, while Status cards allow you to perform tasks instead of discarding a card, the catch being that they take a turn to come into effect. Response cards are played face down and come into play as a reaction to an enemies’ move and can be played at any time. Economic Warfare cards are used to force an opponent to discard cards and if you exhaust your deck, you start shedding victory points, which can make them powerful in the right hands.

A round is simple: you pick a card to discard from your hand of seven cards, carrying out the relevant action on the card, play any Status cards that are applicable. You then have to remove any pieces from the board that aren’t supplied by another of your own pieces, before adding on victory points gained from occupied supply countries. You finally discard any cards you don’t want to keep before draw more to make your hand up to seven again. You would be forgiven in thinking that such basic mechanics would lead to a simple game with little replayability, but Quartermaster General is anything but. The first thing that complicates matters is that none of the countries have a similar deck. Russia has the ability to throw out troops and land battles more easily than any other country. Italy’s deck is there to support Germany as much as it can. Japan’s deck contains a lot of Response cards, so while it suffers from the ability to launch many direct attacks, it is certainly not an opponent to take for granted as its counter attacks can be vicious.

Card Strategy turns into a game of chess, where you have to plan three or four moves in advance. Do you play the Land Battle card to remove that tank in The Balkans? Or play a Status card to increase the number of attacks you can make next round? How about building an army in the Ukraine? Most of the time you will be slave to the deck in front of you and will have to make best with what hand Fate has dealt you. While you can communicate basic intentions to other team members, you aren’t allowed to show your cards to them at any point, so hints must be subtle and always come with the danger of letting you opponents know your plans. In the games that I played, the advantage and the lead could change repeatedly in the space of a couple of moves, especially after several Status cards were in play and Response cards were sitting ready on the table. The beauty of Quartermaster General is that the sheer randomness of the deck can mean that even if you have a favourite country that you’ve played with for three or four games, there can still be stress as you wait for certain cards to come into play. This is also one of the few negatives of the game, as if the right cards don’t appear in your deck until later, you can become the fifth wheel very quickly, unable to counterattack or forge forward into taking territory. Though in all of the games I have played so far, there was only one occasion where someone was left with no real moves they could play. Randomness also means that Quartermaster is not a learnable puzzle like Pandemic where you can guarantee following a certain strategy is going to win the day. It comes down to how you use the cards you have and knowing what you can achieve that means you have to stop and think. I’ve seen players spending minutes at their turn, even after waiting for the other five to play as the tide can turn that quickly.

Beginners have as much chance of playing a killer move as the most experienced players in a game and even knowing a deck inside out has little bearing on the outcome of a match. The fact that you have six different countries each with different decks adds so much to the replayability that it has become a firm favourite at the games club I go to and it’s already on a few must have lists. I must thank Colin, Stuart, Leo, Gordon, Andrew, and Kieran for helping me with the review.

Quartermaster General is certainly worth your time and certainly deserves to be played to discover all of the intricacies it offers. As a strategy game, it is very easy to pick up and play. Going forward, learning how to win is where it shines. It grabbed our attention slowly and will be featuring on the play list for some time to come. I highly recommend you track a copy down.