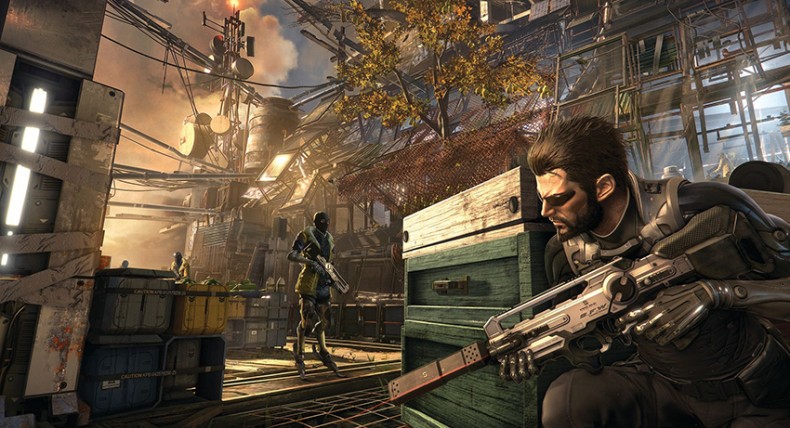 Deus Ex Mankind Divided is an action RPG based on four primary pillars of gameplay: combat, stealth, hacking, and social gameplay. The game emphasizes deep choices and consequences, so the actions players take will alter the narrative as it progresses.

Mankind takes place in 2029, two years after the end of Human Revolution. At the end of that game, augmented people were forced to go on a killing spree that altered the world forever. Mankind Divided picks up in the aftermath of this global event where the world has turned against augmented people, turning them into second-class global citizens forced to live in government-sanctioned, segregated “Aughettos” under heavy police surveillance.

“It’s kind of Deux Ex meets the themes of District 9,” says Mary DeMarle, Executive Narrative Director, who walked us through the behind-closed-doors extended demo of the game at E3.

Adam Jensen returns in Mankind Divided, now working as a counter terrorism agent for a newly formed division at INTERPOL. He is trying to stop black market crime, augmented terrorists, and even those responsible for creating the task force he is working for, who he believes to be the Illuminati, the clandestine global organization that secretly runs the world.

The alpha-build demo we saw was divided into two parts. The first part demonstrates the state of the world after the augmented killing spree. In it, Jensen arrives in Prague, where the majority of the game takes place, and meets up with another augmented agent. The scene is reminiscent of the beginning of Half-Life 2 when Gordon Freeman arrives in City 17. The scene is desperate and foreboding. Armored guards patrol the train station, checking everybody’s papers. Normal people on the sidewalk curse augmented people as they pass them. After a brief conversation and a walk up the platform, a terrorist attack on the train station ends the scene.

The next scene takes place in the wake of the terrorist bombing and find’s Jensen investigating the leading suspects of the atrocity, the Augmented Rights Coalition (ARC). To do so, Jensen travels to an “Aughetto” (this will never be feel right to write) to talk to the leader of ARC.

While working their way through a barracks-like setting to reach the ARC leader, the developers showed off a number of gameplay features, both new and old.

One new feature is the ability to switch between three different ammo types on the fly, including an EMP bullet, which temporarily disables electronics. The developers use these bullets on a security camera and quickly pass by it, undetected. The cloaking augment returns from Human Revolution. Cloaking, the developers slip past a few guards having a conversation and climb up a ladder to take an alternative path past a cafeteria.

Jensen now has a number of gun-arm augmentations. To illustrate this, the developers use the Tesla gun arm, a weapon that can lock onto four enemies at a time and deliver a massive shock, taking them down non-lethally.

Following this, the developers demonstration yet another new augmentation. While Human Revolution features the Icarus legs that allow players to fall from great heights without taking damage, Mankind Divided adds the Icarus Dash, which allows players to leap across great distances. In execution, it’s very similar to the blink ability in the first Dishonored game. The ability can also be used in combat to smash into enemies, like a powerful punch.

The smart vision augmentation is back, and it’s been upgraded to include more information about the environment. Also back are hand-to-hand takedowns, both lethal and non-lethal. But this time, takedowns can also be used while in stealth. They can be used without leaving cover.

After taking down an enemy from cover, the developers then previewed another new augmentation, the remote hack. Players can now hack computer terminals from across the room. Cameras and sentry drones can also be remotely hacked in order to either disable them or get them to work for you. The hacking system from Human Revolution returns as well, with more features, so players can use and upgrade abilities for both hacking styles.

The Nano Blade has also gotten a number of upgrades this go around. Players can now use the Nano Blade as a projectile, like a bolt that can pin enemies to walls. The Nano Blade can also be launched onto walls to distract or attract enemies; it can then be remotely detonated to take down unsuspecting foes.

After a series of ventilation shafts, the developers showed off the game’s improved combat mechanics. The combat now feels more like a traditional shooter. An augmentation called Titan Shield allows Jensen to harden his skin with an onyx shell and march into combat unafraid. This ability looks very much like a similar ability in the Crysis franchise. After that brief combat demonstration, the developers came upon an automated turret. While this situation can be handled in several ways, depending on player preference, in the demonstration the developers used an EMP grenade to stun the turret and then, in real time, switched to armor piercing rounds and destroyed the turret. Alternatively, they could have hacked the turret or tried to sneak by it using another path. In other words, classic Deux Ex gameplay persists.

Finally, the developers confront the leader of ARC, using the opportunity to showcase the social aspects of gameplay. As with Human Revolution, players always have several dialogue options when conversing with NPCs. In the demo, Jensen tries to convince the ARC leader to turn himself in and prove his innocence. A few exchanges later, the developers failed to win the leader over. He triggers a silent alarm only moments before his augments are seemingly hacked by a mysterious agent. His mechanical parts spasm and he soon falls dead before Jensen, bleeding from his orifices.

The demo ends with the developers fighting their way through some more enemy forces and exiting the area on a shuttle. A bald, bulky augmented walks slowly in Jensen’s wake, ominously staring as Jensen’s shuttle flies away. The game seems to hint he is one of the central villains, if not the largest threat players will face when it’s released in 2016.

A media scholar who also writes about video games for various outlets. He's interested in digital game production, media industries, residual media, and discourses around gender, race, and sexuality in media and production cultures.
Support us on Patreon for exclusive content