Bojack Horseman Season 2 is just as Brilliant as the First 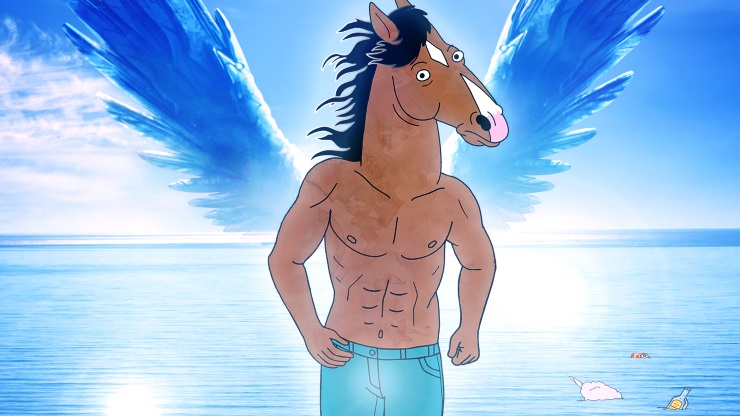 I loved the debut of Bojack Horseman – I’m going to get that out of the way up front, because you need to know that season two isn’t going to change your mind if you didn’t like it. While it never made me belly laugh for thirty straight minutes, it’s the kind of show that makes you want to see more of the characters, and have it never end.

Thankfully, not only does season two continue to revel in the downright daftness of Bojack’s world, in many ways it improves on it, and that’s thanks largely to a slight focus shift.

We know Bojack now; we know he fell for a girl who was writing a book about his life, who in turn fell for a dog. Season two opens with the aftermath of the book which cast too much light on who he really is. Indeed, women are now falling over themselves to go on a date with him, just to reenact parts of his book. He wants to improve himself, but he’s got the role of his dreams and, initially, the season threatens to focus entirely on that.

Instead, it quickly veers away (at times) to the supporting cast. Mr Peanutbutter is especially outstanding, here. The sheer outlandishness of a Labrador-Retriever walking on two hind legs clearly doesn’t escape the writer’s mind, and early doors there’s a treat of a gag that is as silly as it is obvious. His unexplained, yet inexplicable adoration for The Mighty Mighty Bosstones is daft, but works. In fact, he’d be the star of episode three entirely if not for the funniest gag I’ve seen on “TV” in some time. So outlandish is the phrase uttered, well, it’s just not something you hear on a show; and is all the better for it.

Todd has multiple moments to shine, too, and one of them ends in a very “Bojack” manner, and shows how important and powerful the titular horse in question is to everyone around him. As much as he’s a horrible prick, he’s very real because of his flaws.

Returning characters are generally brilliant, but BJ (as a show) is often funny because of the minor details. During episode three there’s a wake, with mourners sat around, talking and drinking. My wife pointed out the dog in a full suit, sat on the sofa. He says nothing (he may as well not be there), but once you notice it, you’ll wet yourself laughing, before being grateful so much detail is there for those that want it. Elsewhere, a ridiculous picture of a dog with a pouty-ass in Mr PB’s house is just as funny, and something you can’t unsee, and a crying bear is funnier than it should be. The overtly anti-internet culture of our favourite horse is beautifully done, as Bojack constantly hammers home the “hashtag” mentality, making himself (and us) look stupid in the process.

So season 2 is just as brilliant as the first, then, with the cast and writers delivering on exactly what we all wanted: more Bojack. But importantly, the soul of BJ is here. Despite everything, something about this show feels human (yes, yes, I know). His chance meeting with his new beau (ably played by Lisa Kudrow) is well done, yet shows the fragility of his character. He loves to treat people like currency, but when he finds the woman he can’t be without, he falls apart and risks losing her through his own insecurities. It’s a big part of what makes it so easy to warm to this show, and it’s here in spades. We like to think we’re all survivors at the centre of our own universe, but in this world we need each other, and that’s kind of a beautiful thing to be reminded of.

Everybody’s favourite curmudgeon, Bojack Horseman is back on Netflix

Coming to Netflix this July