Tembo the Badass Elephant was nearly a Final Fight-type Game 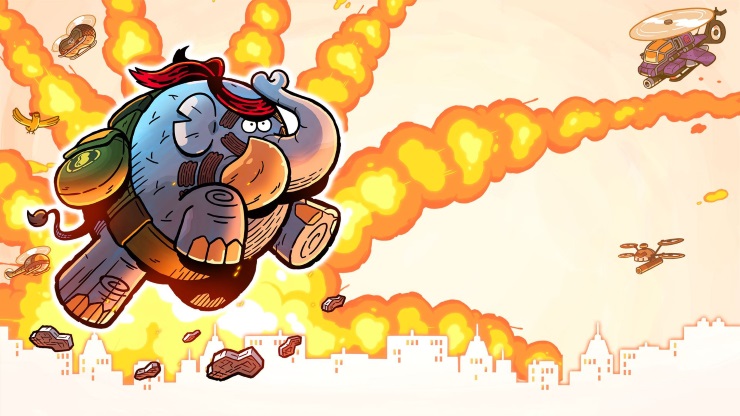 At first, I think James Turner (Director on Tembo, and 3D cut-scene director on the Pokemon games) is yanking my chain, and SEGA’s Pete Oliver (who set up our interview) has preemptively told him I’m a big fan of Streets of Rage, just in an inplausibly long-winded effort to ruin my day. But no, it appears that Tembo the Badass Elephant was nearly a Final Fight-type game.

It wouldn’t be so unbelievable, either, if not for the fact that earlier, when I asked James about the fact that HarmoKnight (another game he directed) had a protagonist called Tempo, so surely, one muses, he has a thing for names beginning with Tem? “I was surprised when it turned out like that as well!”, he says, and now I’m confused – didn’t he direct both games? “It wasn’t anything I specified; that it had to sound like ‘Tem’. Originally Tembo was not called Tembo, but we hashed around a few ideas and SEGA had a bit of input, so it ended up as Tembo, which surprised me as well”.

Although a lot of people will consider Game Freak to be a second-party developer for Nintendo, they are most definitely third-party. “For this game, we created a prototype in-house, and SEGA came over, played and liked the game. We thought that the partnership matched the spirit of the game: an old school side-scrolling platforming game, so we thought it would be a good collaboration”. The elephant in the room (I should be on Michael McIntyre’s roadshow, or whatever, with jokes like that, right?) is Sonic, of course, and comparisons are obvious. “The game originally was a love letter to 1990s side-scrolling platforming games, so we’re happy about comparisons. We took a lot of inspirations from a lot of our favourite games from that era, and Sonic was definitely one of them – the speed, the kinectic nature of the game, we really like that a lot, because our character is a fast character as well. So we looked at how they handled that issue in the game, having a fast character that also can engage in platforming gameplay, and how they solved those issues was an inspiration to how we made our game”.

But it’s not just Sonic’s speed and the gameplay that is evoked in Tembo, the colourful palette is, too. “Those are the kind of games that I loved growing up: the colourful games that made you happy when you played them. I wanted to capture that feeling in our game, a lot of games are brown, and a bit dingy now. They’re fine in their own way, but I wanted to offer that happy, blue sky fun in a new package”.

It occurs to me that I’ve not asked an obvious question: why an elephant at all? “I’ve never particularly had a fondness for elephants, but I wanted to make a mascot character game. It was like an in-house competition where we pitch our ideas, and whichever one is most interesting to the head of the production department gets to make it into a prototype. So I was trying to think of a good character for a mascot type game. I was walking home from work one day and I noticed a sign board with an elephant illustration on it, and immediately I imagined all the gameplay mechanics you could have with en elephant. As soon as I got home I sketched the character, his moves and attacks, then I stared working on a document the next day”. And while I don’t consider myself an expert on elephants, the roll-jump that has divided players isn’t exactly something I’ve ever seen an elephant do. “Yeah, I’ve never seen that either. But in the original prototype it was more like a Final Fight game.”

I’m sorry, but what?

“Yeah, we wanted to make a more side-scrolling platform game, but there was a lot of combat. Tembo would be using his trunk to punch the enemies, but we found that it was a waste of an elephant. He was just using his trunk as a fist, and you could have a human there instead. Because he’s a heavy character, we wanted him to use his full body to smash up the environments, so we gave him a dash, then the bounce. As soon as you started to bounce and dash into things it started to feel really good”.

Reviews have been mostly good, but the difficult has separated people. “That was part of the whole old-school philosophy behind the game. Some people do appreciate that, but overall the response has been pretty positive.” It’s only on the new consoles, though, which seems weird given that it’s not a technical powerhouse. “It was just a case of wanting to do something fun and challenging for ourselves; something new. We have the main Pokemon production, but we also have a second department that is dedicated to making original games, and part of that is doing something that we haven’t done before. With this game I thought it’d be a fun and interesting challenge to develop for the new generation consoles, which is how I originally pitched it: doing something with Unity on the new machines”.

Is there room at Game Freak for a second franchise if this takes off, then? “There’s always the issue of resources within the company, but yeah, of course if Tembo does well and people like it, I think there’s a chance of a continuation in the future. I’d certainly love that”. What about an Adventure Time-style cartoon show? “I would be totally up for that, I could fill out a bit more of his back-story”. There’s no spoken dialogue in the game, though? “I like games that communicate story through artwork and visuals, that’s something the Mario-series does really well.” There’s no Wii U version, however. And no Vita port, come to think of it. Any plans? “The initial pitch was for PC, PS4 and the Xbox, and we did talk about other versions during development. But it’s a small team, and the schedule was for a year of production. It was our first online stuff (leaderboards, certification, etc), so our hands were full with those three platforms, so it just wasn’t possible.”

So what is James’ dream franchise to work on? “Sonic the Hedgehog”. There’s zero hesitation in his reply, so it’s handy that Game Freak have this relationship with Sonic, I suggest, fishing… “Yeah, that’s a case of pitching to the right people, I guess.” And hey, SEGA, James keeps his ketchup in the fridge, which I think confirms the future of Sonic would be safe in his hands.

Editor-in-Chief here at GodisaGeek, I organise almost every bit of content as well as running our weekly Podcast, and being the lead producer on our YouTube Channel. That means I'm very busy and sometimes grumpy. Yay!
MORE LIKE THIS
Final Fightgame freakPokemonSega