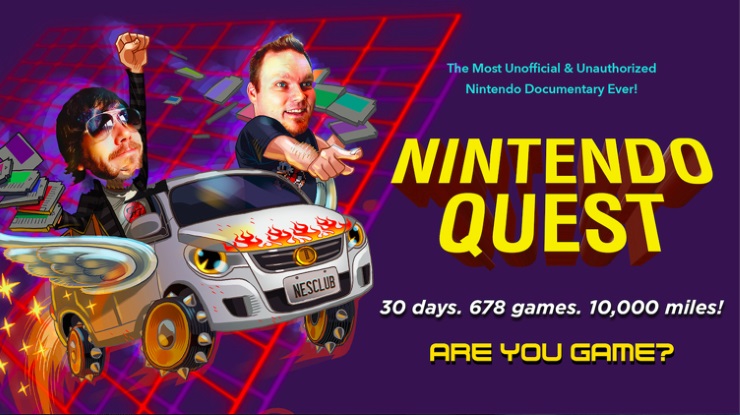 I wholeheartedly have the utmost respect for videogame collectors. Although, as someone who has previously sold a lot of his collection due to a lack of storage space and funds, I regularly experience pangs of jealousy towards those who are able to amass the display case-busting collections I’ve seen in pictures on that there internet.

But while there is something strangely magical about seeing a shelf full of uniform game boxes and cartridges, I think a lot of us would normally gloss over the journey of obtaining these nostalgic goods, alongside the reasons why this endeavour had ever begun in the first place. Nintendo Quest is a documentary that follows one Canadian man (Jay Bartlett) on his journey to obtain every single officially licensed North American release for the Nintendo Entertainment System. While there could be arguments from collectors over what could and should be included on this list, Nintendo Quest focuses on obtaining 678 NES games, including some of the rarest games ever released. Oh, and he plans to do this in a mere 30 days, using only brick-and-mortar shops, and private sellers – no internet/eBay purchases allowed. Joining him is long-time friend and director, Rob McCallum, as well as a small filming crew, while other personalities within the North American gaming industry and community also show up either to help Jay reach his goal, or simply to help explain why the NES is such an important system to so many people like them.

It’s this truly old school approach to the quest itself that makes this film so engaging, and we begin to realise that there is much more to this narrative than just a guy buying a load of games. Bartlett isn’t a perfect, charismatic personality or a loud-mouthed hyperactive YouTuber; he’s just a seemingly genuine person who is extremely passionate about games (and judging by his impressive collection of Star Wars toys, not new to obsessive collecting). Most importantly, he’s one of us. We learn more about him as a person and watch him genuinely grow, as we experience the highs and lows of such a daunting quest, and become more invested in the journey as a result. I think as passionate gamers, we can all see a part of ourselves in Jay, and by the end it’s hard not to cheer him along; but this isn’t a saccharine romp throughout the game stores and arcades of Canada and North America. Real life and Jay’s own personal anxieties become as much a part of this journey as anything else, as we learn more of his formative years through friends and family.

The quest itself is presented in a very simple and clear way, with an ever present on-screen graphic, detailing how many games have been purchased, how many days of the challenge have elapsed, as well as how much of Jay’s budget is left. This is shown as an energy bar, as the financial aspects of such an endeavour are never really detailed, which does seem like a glaring omission considering the value of some of these games. A recurring sidequest within the movie is the search for the 20 rarest NES games, which becomes a massive undertaking in itself for Jay as he tries to obtain some real Holy Grails of gaming. Everything is filmed in a very real and very down to Earth way, as we see the crew interact with shop owners and even other rival collectors that are looking to complete their own NES collections, and there remains a real sense of community throughout the 92 minute runtime.

As a very simplistic look at retro game collecting, there isn’t quite enough talk about the games themselves, which is a shame as I would have loved to have heard more about what these games mean to the crew, and to see more of the many voxpop conversations had with the various members of the gaming community like Tommy Tallarico (veteran composer/Video Games Live) and Billy Mitchell (former high score record holder of Donkey Kong, among other arcade games). It does seem like a lot of footage was filmed, so hopefully there’ll be a release which includes some more footage from personalities that maybe had a little more to say than was included. However, the film is paced quite well as-is, edited in a way that doesn’t concentrate too much on the footage of shelf rummaging, cutting away to other topics to keep the documentary flowing at a good speed. Director Rob McCallum appears as an occasional narrator and to host some of the history lessons on the NES itself, and these diversions are presented well and do a fair amount to bring non-savvy viewers up to speed.

With heavily produced, almost artificial shows such as Storage Hunters, American Pickers, Toy Hunter et al appearing on our televisions with increasing regularity, Nintendo Quest is a refreshing and very honest take on the world of buying old things. While it could definitely have gone into more detail on some aspects, as a broad look at the hobby, it treats the subject as every fan would hope – respectfully and with complete and utter adoration of the subject matter. It shows a world of gaming that I don’t think we’ll ever see again, and for that reason this film is worth a look, even if you aren’t an old fart like me.