previous
Interview: Gareth Noyce on Lumo, Classic Games and Striking out on His Own
random
next
Report: CD Projekt Red Aiming for Late 2016 Release for Cyberpunk 2077
0 comments 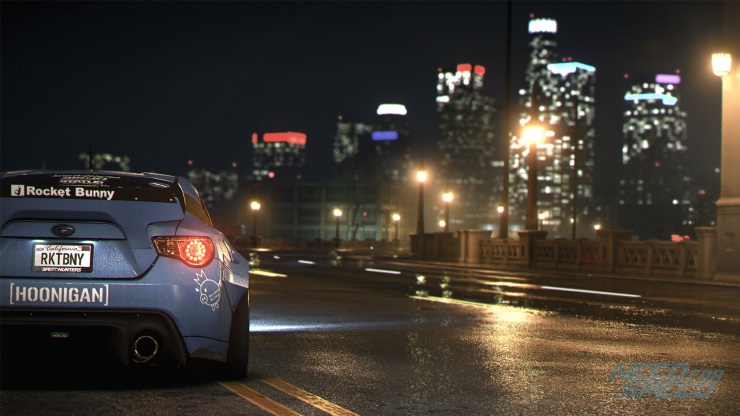 EA’s Need for Speed reboot launched to okay reviews, which I thought were a little harsh. Sure there are issues, that damned annoying phone being one of them, but I really enjoyed my time with it, and still need to jump back in to see if my guy Spike ever gets to meet Magnus Walker. Just prior to release I had a chat with Craig Sullivan, Creative Director at Ghost Games, the studio behind the reboot (and many other recent Need for Speed titles) about some of the more important features of his creation, and what the future holds for the franchise.

“Going forward I don’t think there will be a Need for Speed game in the future that doesn’t have some way of customising or controlling your handling style,” said Craig when I mentioned that I really didn’t get on well with the grip handling styles. “I think that’s going to be a big win for a lot of people. Just the fact that you have experienced it and you’ve found something like drifting is the thing for you. For every one of you there’s going to be at least one other person who could sit next to you and would want to play with a more ‘grip’ style. That’s a powerful choice and something that can’t be underestimated. It’s something we have talked about for a while but it’s something that is very hard to do. I challenge you to find another game that allows you such a variety of handling styles and control.”

The customisable handling is certainly one of the most interesting aspects of Need for Speed. Using a simple slider you can select to set your car up to have a lot of grip, meaning you have to brake to get around a corner in a more simulation style, or have much less grip, meaning a tap of the brake will send you into a massive drift. It became clear to me early on that setting up with a grip handling style when entering a drift event didn’t really work out, but Craig was quick to point out that maybe I wasn’t playing it quite right. “It’s mainly a choice that says if you want to drive the car in a more realistic way you can, or if you want to drift around the corners you can. Personally, I like to drift around the corners because it’s way more fun and I like showing off, but some people don’t and they just like to slow down and break to drive around a corner. It’s not so much that we are saying use both of those settings, the choice is completely yours and the game is not incentivising either way. You can still have a car that is quite grippy and play in the drift event and use the E brake to drift. If you do use the E brake, you get a more extreme angle more quickly so you end up with more points.”

“We worked a long time to make sure that drift and grip handling are competitive against each other so we did a lot of testing where we had people just braking and slowing down to go around the corners and people drifting around the corners. Obviously, if you set the car up to be super grippy and you don’t use the E brake you aren’t going to drift in the drift events so there’s a certain amount of give and take, but it’s there to give people that choice and to spark that discussion on how you set up your cars. We like to think there is no right or wrong way of doing it.”

With the revelation that EA is making more money off micro transactions and DLC than they are selling full games digitally, I decided to ask Craig if he felt almost pressured into creating a large amount of post launch content and if gamers are right to expect that they will get more content post launch instead of it just being over when the credits roll.

“We already have people back in Gothenburg working on content that is going to be coming out over the next few months. It’s worth saying again that people are sometimes sceptical about DLC or patches or expansion packs coming out thinking ‘they are only doing this because they want to make us pay money’. We have said before and I’ll say it again now: we have absolutely no plans to charge for this content as it comes out.”

“I think it’s definitely more expected of games now, particularly big AAA console titles. I mean, if I’m playing a little cool indie platformer maybe I don’t expect regular free content drops. But if you look at big sellers and big experiences now I kind of expect that when I pay my £40-50 that the experience doesn’t just end there. In the games I’ve worked on – even going back to Burnout Paradise – we did a year of paradise, which was a year of fourteen different updates, I think we did. In the last few Need for Speed games we have always added content afterwards, we did car packs and bits and pieces for rivals. I think we did an airport on Most Wanted as well.

“It should be kind of expected by our audience because you want to get your money’s worth. If you buy the game and play all the way through the content are you going to put the game down and not play Need for Speed until the next one is out? We like to think that we could give you cool new fun things to play by giving you new content. So yeah I kind of do expect it, if you look at all the games me and you are probably playing now, all the big games, they are pretty much all supported by DLC and expansions. So yes I do expect it from certain types of games and I do expect it from Need for Speed.” So with Need for Speed finished up, and DLC being the main development focus right now, I moved the conversation onto a slightly different topic: what the future holds for racing games. Visually, Need for Speed is one of the better looking games of the year, especially in terms of lighting and the brilliant live action cutscenes that also feature your customized car by way of some groovy rendering tech. But what I wanted to know is if it will be possible in the near future for a Need for Speed game to be photorealistic.

“So I think our game looks really good, I think it’s getting closer to it. In some cases in the past, with the right camera angle and lighting setup, we fooled people with screenshots saying, ‘Is that a real car, yes or no?’ I think driving games, partially because we don’t have a large amount of CG humans present on screen, will probably get to photo real before any other genre. Even when you look at a really good video game experience with a CG character you can still tell it’s not a real person, but we are mostly modelling inanimate objects like city environments and we have good lighting and we have cars which are basically made of metal, glass and rubber. There’s still a way to go but games are only going to look better and better. I think that we are going to be playing video games probably with different camera setups in the future where it is pretty much indistinguishable from real life.”

With the mention of different camera setups I jumped in and asked if he was referring to virtual reality and if that could work for Need for Speed in the future.

“I think VR as a way of immersing the player is really cool. There are some things we need to work out going forward in terms of people being able to play VR experiences where you can play for a long time and be in there for a long time. At the moment someone can look at a TV sat on their sofa for much longer than they can be inside a VR environment. But at Ghost we are really interested in new technology, and there are a lot of cool new things on the horizon and the machines are really powerful now, so over the coming years we are going to see VR taking off a lot. I think driving games are going to be a perfect fit for that because we can put you in the car and have you look around the interior. Need for Speed is a great example of something where we could put you in an extreme situation – if driving a car with the setup we have now at 250mph is cool, imagine that in VR. There’s a bunch of scope for doing interesting stuff for VR in the future.”

As my time chatting to Craig wrapped up I asked the question that we ask everybody here at God is a Geek. Where does he keep his tomato ketchup, in the fridge or in the cupboard?

“It’s in the cupboard. It has to be in the cupboard right, because I’m British? You don’t want it in the fridge because it goes on hot food, like your chips.”

eSports! I joined God is a Geek all the way back in September 2013 and since then have spent most of my time on Dota 2, and occasionally posting the odd review, news article or totally wrong predictions for The International. When I am not playing Dota I can probably be seen watching some kind of strange eSport or begging for more Twitter followers (@MikeStubbsy if you are interested). Aside from GiaG I am a computing student, football coach and major Apple fanboy.
MORE LIKE THIS
EAGhost GamesNeed For Speed