Opinion: The problems with game reviews 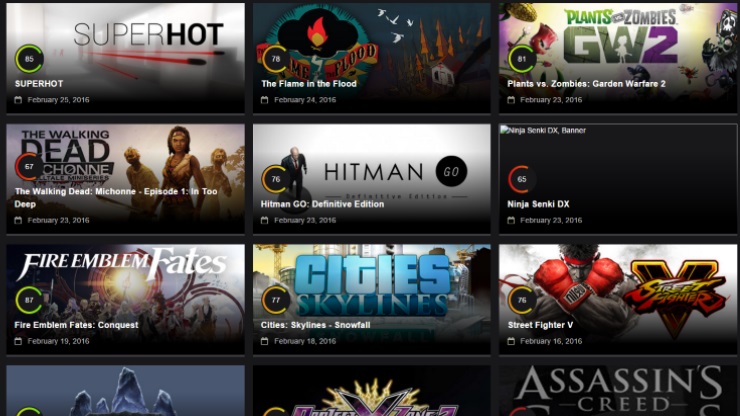 A lot of games publications are discussing reviews these days. The idea of a game being released after a slew of reviews that state categorically if it’s any good or not, ultimately resulting in a numerical, alphabetical, or star-system of ratings that you and I look at and assign our own value to, is dead and gone. Games are fluid, nowadays. Take Splatoon, a game that we scored 7/10 because it had some baffling design decisions and was missing content, and right now, still has baffling design decisions but plenty of content. What was a 7/10 upon score might now be a 7.5, or even an 8 at the time of writing.

And that’s a problem for multiple reasons. Firstly, most people consider a 7/10 to be average, which is complete rubbish. By very definition, a site like us giving the game a 7 is an endorsement that it’s a “good” game. But that’s not enough for an awful lot of people. There’s a reason that people think a 7 is an average score, and it’s only in-part because not enough sites use the scale properly.

By that I mean, of course, that so many games get scored between 7 and 9 that it’s become the new average. If a game getting a 7 is the average score, it’s actually almost fair to assume that 7 does make it average. Not every game can be amazing, and if nine out of ten games get 7s, then they somehow make 7 the average.

And this is all very confusing, quite honestly I already need to go and have a lie-down.

What I’m saying here, is that the consumer is not to blame, even if it may look stupid when a game gets a Metascore of 73 and is considered average. A lot of the blame should be laid at the feet of critics, sure, because if a game is average, it should be scored accordingly, not given a 7/10. The thing is, though, how many bad – or average – games do you see nowadays. In fact, what was the last straight-up “bad” game you can remember playing. In terms of being universally bad, I can think of Sonic Boom on Wii U, something I never played, but also never heard a single good word about it. I recall watching Giant Bomb’s Quick Look of the game and thinking “fucking hell, how can a game that bad be put out in the modern age”.

It’s broken, badly designed, just… just awful. But I can’t think of many other games that bad. Can you? So if most games are good, what is the problem here? Well, it’s perception, and an ever-decreasing amount of disposable income.

February is coming to a close and it’s been one of the busiest months I can remember for covering games. There are 29 days in the month this year, which is one payday for those who are paid monthly, or four for those paid weekly. Gaming is growing up, lots of people have mortgages, kids, second jobs – christ knows what else – and the younger audience now live in a world where everything is outrageously expensive, games included.

So how the hell do you buy every good game that was released this month?

At a glimpse, games we’ve scored over 8/10 this month are: XCOM 2, Devil Daggers, SUPERHOT, The Town of Light, The Flame in the Flood, Plants Vs. Zombies: Garden Warfare 2, The Walking Dead: Michonne, Far Cry Primal, Bravely Second: End Layer, Street Fighter 5, Darkest Dungeon, and Firewatch. I’ve not included some seriously niche titles like Naruto Shippuden: Ultimate Ninja Storm 4, or older games hitting new consoles like Not a Hero, Dying Light: The Following – Enhanced Edition, and Rocket League on Xbox One.

Again: how do you keep up with that volume of games – of good, no, great games releases in one month. That’s a list so long I nearly couldn’t be bothered to grab the URLs and make all of the titles link to our coverage for SEO purposes.

Scores are a problem, because people assign a huge weight to them. Reviews aren’t broken, either. Like the games themselves, they’re having to evolve and change, becoming fluid. A score shouldn’t be a final, end of discussion full-stop. But can you really blame someone for saying “I’ll skip that game, it only got a 7”, when there’s £300 worth of games hitting the market in a month that are scoring 8 or above? That 7/10 isn’t a bad game, it’s just not good enough for someone to spend £40 on when there are four 8/10s (or above) that they also want.

We are in a golden age, where quality has become higher than ever. Broken games are still out there, but they’re less prominent than they were when I was a kid. Better still, a broken game can be fixed, unlike finding a Spectrum tape you’d bought couldn’t be completed, and being stuck with it – though it’ll never, ever be okay to ship a broken product.

It’s time to be less angry about reviews. Critics are fallible, of course, because they’re human. A review is never wrong in the moment, it’s always how the writer felt about it in the now. But critics and readers should be friends, a critic helps the audience, while the audience keeps the critic in work. The antagonistic nonsense that screams “how much were you paid for that review?” is just plain stupid for so many reasons that it’d require a whole new article just on that. A critic is nothing without the reader, after all.

Games aren’t going to let up, they’re getting bigger, and more expensive to make – which is, itself, a reason that they are of a higher quality across the board. The score system is important, and yes, more media should use it properly, but ultimately, the sheer amount of games being released means that you’ll never keep up, and shouldn’t feel bad or angry about a game getting a score you don’t quite agree with.