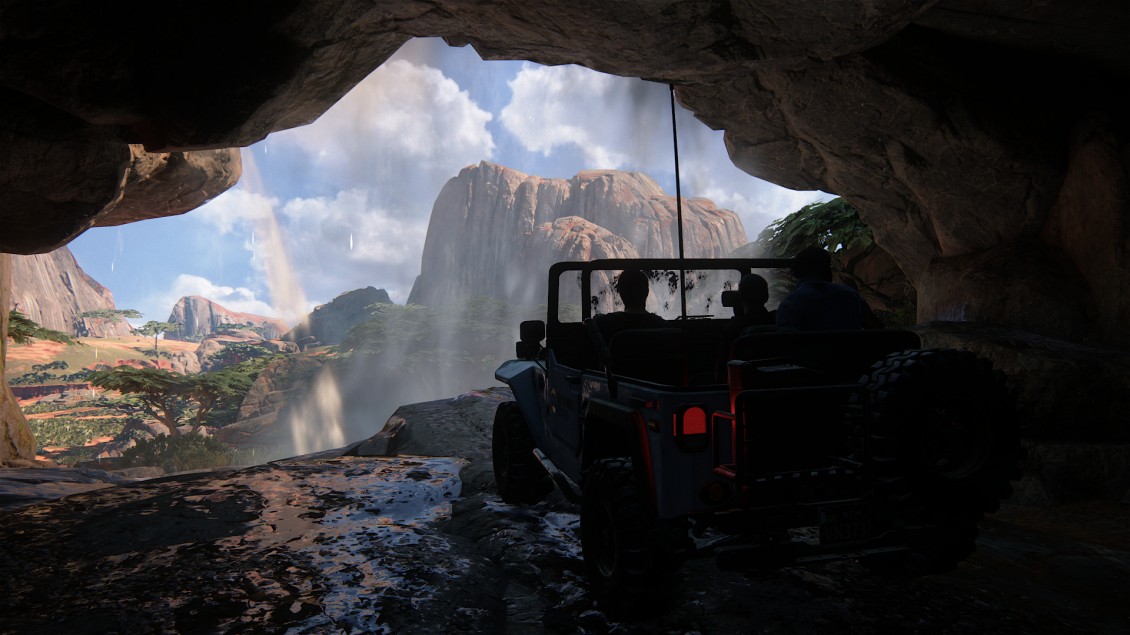 On the plains of Madagascar, under a burning sun in the middle of nowhere, Nathan Drake is looking for answers. Accompanied by his older brother Sam and stalwart best friend Sully, they head towards a volcano in the distance, unsure of what they’ll find; maybe an undiscovered city, maybe an unfathomable amount of treasure or maybe something not quite human. Either way, the final piece in the Nathan Drake story looks set to be even better than the last.

I was given the opportunity to play a small section of Uncharted 4 recently, and it’s quite clear the game will be something incredibly special. From the stunning, vast environments to the focus on the littlest details, it looks as though Naughty Dog has created one of the nicest looking games in existence. As you set off in your 4×4, you can’t help but gaze at the jaw-dropping scenery; there is so much detail in the fauna and the landscape it made me freeze on multiple occasions just so I could take in the view.

Drake, Sam and Sully also look great, with player animations ramped up from previous entries. Having the power of the PlayStation 4 to create such great animations was always going to help, and from the way the characters transition from cutscenes to gameplay is seamless; everything moves so naturally and I encountered no texture pops or frame rate issues at all.

It’s impressive how the terrain plays a role in the way you travel across the map. Trying to manoeuvre your jeep up a muddy incline isn’t easy, especially when there is no grip on the ground. There was one particular hill I couldn’t get up because it was caked in mud, and working out how to get up provided some great moments where gameplay and player ingenuity merge.

On the front of the jeep, there’s a winch (something Drake and the others joke about through some funny, well-delivered dialogue) and by grabbing it and tying it round a tree at the top of the hill, I was able to climb up and continue with my journey towards the volcano. I shouldn’t get this excited about a winch, but the way you physically have to walk around the tree and connect it to the cable is such a minor detail, but one that adds to the realism and effort Naughty Dog has put in.

After finding some treasure and exploring a couple of abandoned ruins, it was time for me to see how the combat has improved since Uncharted 3: Drake’s Deception. As I pulled up to the enemy outpost, I could see multiple soldiers spread across various levels of the compound. You can now tag enemies when you look at them by pressing the L2 button, and as I hid in some tall grass I could keep track of their movements, waiting patiently to attack. You will be able to use stealth a lot more in Uncharted 4; like the tall grass, there are many other areas to hide behind or inside of which makes sneaking up on enemies just as important as going in all guns blazing.

On the whole, the combat feels familiar to the previous games, but it doesn’t mean there aren’t improvements either. The thing with Uncharted is the combat has always been impressive, and changing it too much would be a silly mistake. Being able to change between firing a rifle or handgun, throwing a grenade or engaging in melee combat is even easier and the flow of combat feels wonderful.

Adding the grappling hook is a stroke of genius and it will be interesting to see how this is used in the other environments. During the gunfight, I used it to jump fluidly between shooting multiple soldiers on one platform and swinging across to another to hide behind cover. I was also able to climb a tower by swinging from one platform to another, and it’s so easy to do so. It’s a great addition to how you play the game, giving more layers to Uncharted’s fun and diverse combat. It’s also going to be a great tool to help you survive combat when it all becomes a little too intense.

In the 40 minutes I spent with Uncharted 4, it was clear how much effort Naughty Dog has put into every facet of its creation. From its fluid combat to the way the characters interact and the environment looks, Uncharted 4: A Thief’s End is everything fans could hope for. There wasn’t a single thing I disliked about the demo and it has only made me more excited to play the full game. If you’re worried about whether or not the game will be as good as any of the other titles in the series, don’t be; there’s every indication that it’s going to be fantastic.

Help support us by buying from these retailers: