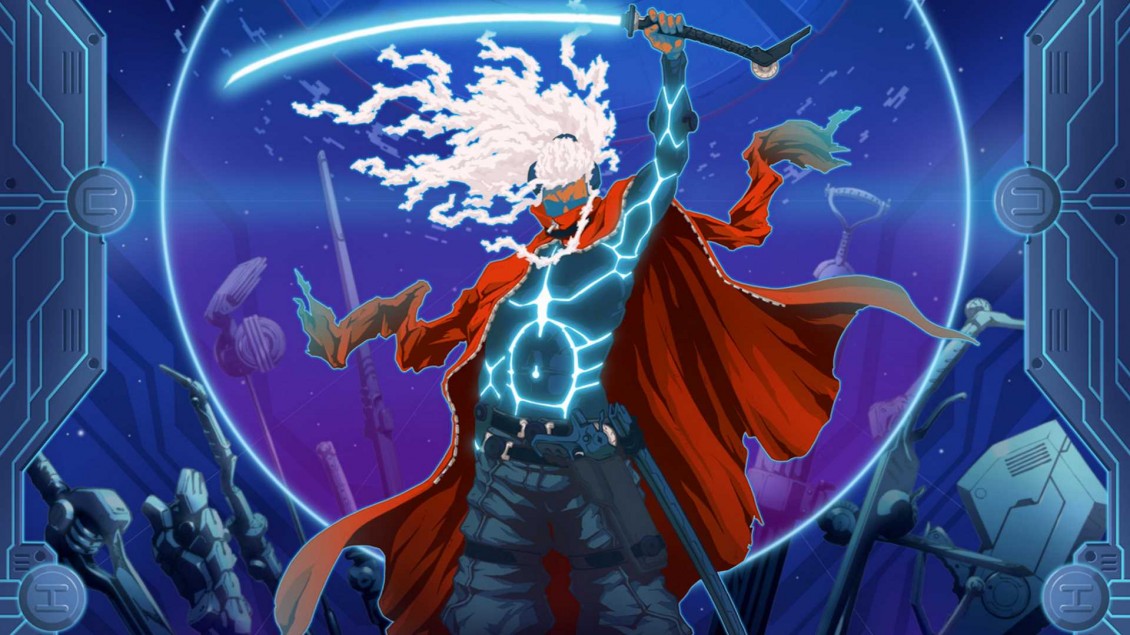 Later this year, Furi will hit PCs and PS4 systems across the world. The game is the brainchild of The Game Bakers, an Indie studio comprised of two former Ubisoft members, Emeric Thoa and Audrey Leprince, and is the follow up to their 2014 Wii U and 3DS game Squids Odyssey. The game casts you as a futuristic samurai escaping from a weird prison, and the only way out is through the guardians standing in your path. Here are 5 reasons you should be excited about this upcoming slash ‘em-up:

The character design is incredibly stylish The characters are the work of Afro Samurai manga artist and writer Takashi Okazaki. His modern take on ancient Japanese stylings shine through in all of the designs as they incorporate elements like Oni masks and samurai hakama. His trademark style also extends to the protagonist and his sidekick.

Your character is aided by a guy with a giant rabbit for a head. In Afro Samurai, the titular character was stalked by a guy wearing a giant toy bear head upon his bonce, but here you’re followed by a guy wearing a purple rabbit head with glowing red eyes. His reason for doing so is unclear, as are his motives, but he looks pretty cool and it’s thanks to him that you even have a shot at getting out of this hell hole.

The unique combination of gameplay styles Imagine a cross between Titans Souls and DmC. Titans Souls was a boss rush game, and Furi follows this pattern. You’ll go down through the levels to get back to terra firma, but the only way down is fighting through sequential bosses. The visual style is a lot like the Devil Trigger moments in DmC, with bright, garish colours and stark whites; it’s a look that certainly leaves a lasting impression.

Furi is hard, damn hard. There has been a surge in tough games at the moment, and Furi is following this trend. It requires precise timing and measured attacks to bring down the guardians standing in the way of your freedom. As is the way with bosses, the idea is to figure out the patterns and use that knowledge to bring them down – and the feeling that comes with successfully taking them out is amazing.

The combat is frenetic

The game incorporates bullet hell mechanics into its fighting sequences. Like cult hit Nier, the enemies will cover the area with masses of pulsating plasma in an attempt to bring you down. Quick reflexes and a sharp trigger finger will be required to navigate your way through the colourful onslaught to continue your assault.

We’ve only played a little of Furi so far, but it’s shaping up to be an excellent title. It’s combination of strategic melee fighting and bullet hell blasting is an interesting pairing that we see very rarely, so it’ll be good to see if The Game Bakers can pull this off. There are questions as to how long the game will actually be, but considering how tough the guardians are you won’t be getting through them very quickly. You’ll need to analyse them closely and work your way around their moves to best them. Question is, are you up to the challenge?

A lover, not a fighter and an all round good guy (he would say that, he wrote this after all), he's happy to be here as part of GIAG.
MORE LIKE THIS
Furi