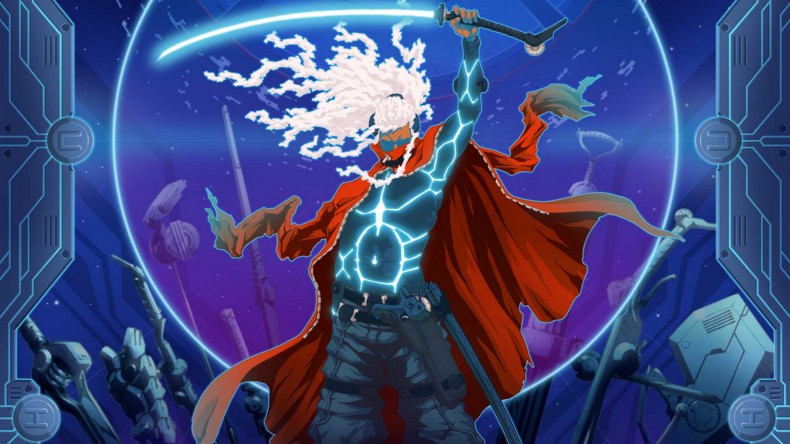 A few years ago everyone was complaining about games being too easy. The checkpoints were too lenient, they said, and the bosses were all quick time events. Games were too concerned about telling a story and not presenting a challenge, and the only titles out there to trouble the hardcore were leaderboard-chasers like Trials or punishing platformers like N+ and Super Meat Boy.

The last half-decade or so has seen a welcome resurgence of genuinely hard games. The Souls series flies the AAA flag for hardcore challenge, while twitch-hitters like Bayonetta 2 are there to satisfy the less patient, more bombastic audience. Indies like Lovely Planet and The Witness offer challenges both physical and intellectual, respectively, and Spelunky and Titan Souls cater to the more adventurous with their rogue-like charms. Furi, a boss-rush game from developers The Game Bakers, offers something that fits nicely into this eclectic sub-genre of punishingly hard titles while still managing to be wholly unique – a rare thing in this painfully generic day and age.

It tells the fragmented, intentionally vague story of The Stranger, a white-haired Samurai who we first see languishing in his prison cell. Set either in the distant future or in another reality entirely, Furi follows The Stranger’s escape and subsequent quest for vengeance across a variety of stages that each boils down to a multi-leveled one-on-one duel. His guide is a mysterious benefactor with a magical staff and a big purple bunny mask who seems able to offer advice and platitudes but no actual help.

Each fight is a punishing lesson in patience, precision and perseverance as you’re pummeled by a plethora of attacks designed to rattle you, disorient you, and force a mistake. Your enemies each have a unique number of lives, while you have only three. Removing one of theirs will return one of yours (but only if you’ve lost one, that is; there are no extra lives here), but doing so can be remarkably difficult.

An encounter often begins with a ranged phase, where the enemy will pelt you with projectiles, energy beams and walls of plasma that must be evaded. Now and then during this phase they’ll dart forwards and use a melee attack, which you can parry or dodge with precise timing. Parrying returns a fractional amount of health, while if you time it perfectly you can “punish” the enemy with a brutal counter. In addition to his katana, you can also use The Stranger’s pistol to attack from a distance, though the damage is minimal unless you can land a charged shot, and later enemies can often reflect projectiles back at you.

Once you deplete their first bar of health, an enemy will enter a dazed state wherein one more hit will trigger a close-quarters fight. The camera zooms in from the usual top-down viewpoint to present a more personal angle, and the enemy will then mix lightning-fast strikes with heavy-hitting area of effect attacks. They will block and evade you, and button-mashing or panic will see you fail in a matter of seconds. If you die, you go back to the beginning of the phase, which can be incredibly frustrating when each one is so aggressively, confidently difficult. During later phases it becomes a bullet-hell nightmare as you attempt to dodge every wave of plasma and ball of energy launched your way while keeping one eye on the enemy so you can parry their attacks and avoid damage or recuperate some lost health. What makes Furi so special is that each boss is so completely different to the last.

Among the rogue’s gallery there’s an old man who can stop or slow time, a crazed water-dwelling psychopath who can make copies of himself, and a tormented prisoner so savage that she’s given the run of her jail because she’s guaranteed to rip anyone she encounters limb from limb. From the art-style to the move-set, each of The Stranger’s lethal opponents is totally unique, which means that while you can become accustomed to the length of your dodge, the speed of your projectiles, the sound of an incoming strike, and the finger-twitch necessary to survive the close-quarters fights, you’re never sure what’s coming next until you’re facing it. It adds an element of trial and error that can occasionally feel unfair, but on the whole it keeps you on your toes more than any game I’ve played in a long time.

As a result, it’s not a game for everyone. I’ve rage-quit numerous times, sworn never to touch it again while half-blinded by white-hot fury, only to find myself dipping in a few hours later for one more go and finally overcoming the boss I was stuck on. Of course, the next one is usually even harder and thus, the cycle repeats. But that’s the type of game Furi is: it’s unapologetically difficult, and the millimetre-perfect design is such that perseverance and patience will eventually see you victorious. You may find yourself reaching a phase you just can’t beat with more and more life each attempt, until it suddenly clicks and you push through. Or you may simply find that the combination of bullet-hell dodging, split-second timing and reflexive melee combat is too much – and Furi will almost certainly be too much for some, especially the more casual gamers drawn in by its pretty-pretty colours.

The art-style is stunningly beautiful, with each level presenting a different palette and each boss displaying a wide variety of flashing colours in their unique attack patterns. The Stranger himself cuts a striking red, white, and black figure, while the slow, uneventful walks between arenas show off some truly mesmerising landscapes.

Interestingly, these quiet walks are when Furi reveals tidbits of story through Bunnyhead’s often cryptic words. Combined with the pre-fight cutscenes that give away snippets of information about your opponents, they slowly reveal a narrative that rarely states anything outright. You’ll spend the majority of the game wondering exactly why The Stranger was imprisoned in the first place and if, in fact, he was the bad guy all along.

Furi is a rare game. Its unique design manages to make single encounters feel like multiple levels, and the combination of bullet-hell mechanics and precise, responsive melee combat is addictive and punishing at the same time, repeatedly forcing you to climb a steep mountain of frustration and rage to bask briefly in the shiny, transient light of unparalleled joy when you finally vanquish a foe – before you’re knocked straight back down into the darkness to begin the climb again. The difficulty will put many off and almost certainly divide opinion, but if you can accept Furi for what it is and stomach its titanium challenge, you won’t find anything else like it.

Furi is a rare game: unique, challenging and fun, but it will almost certainly prove insurmountable for some.