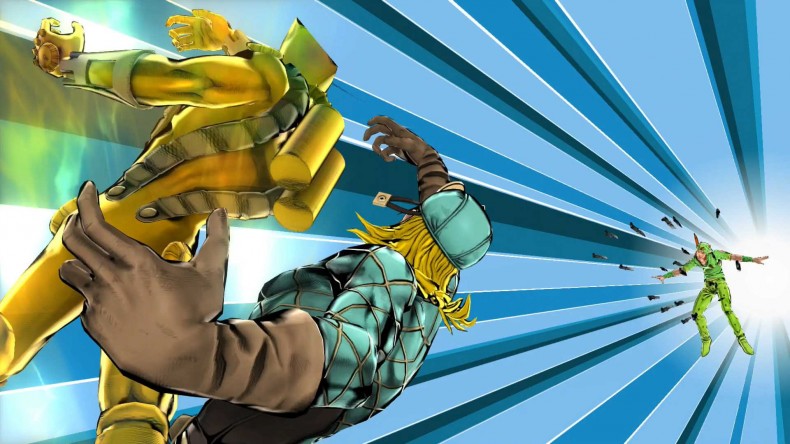 I’ve not played anything like JoJo’s Bizarre Adventure: Eyes of Heaven before. I’ve been unlucky to have missed out on watching the anime so I had little to prepare myself for what I ended up playing, and my word, was I pleasantly surprised. It’s flamboyant, bonkers, colourful, and full of life. Much like CyberConnect2’s Naruto title from earlier this year, the combat and visuals work beautifully together. It may help to know a bit about the JoJo universe, but it certainly won’t impact how much enjoyment you’ll get from it.

The story starts off with Jotaro Kujo (who is a cool mix between the Fonz and Judd Nelson in The Breakfast Club) defeating the vampiric villain Dio, when various characters that have died throughout the JoJo universe are coming back to life to attack Jotaro and his friends. After meeting the excellently titled Robert E.O. Speedwagon, they must travel though space, time and alternative dimensions to stop whatever it is bringing fallen friends and enemies back to life with the power of the Holy Corpse. If you do follow the JoJo Universe, you’ll be happy to know that the author and cartoonist of the series, Horohiko Araki has overseen the creative direction in Eyes of Heaven. The most interesting and gratifying part of Eyes of Heaven is the combat. Each fight is a tag team battle where you can control one character and the computer controls the other. Pressing square starts of your attack and pressing triangle will introduce a harder strike. Depending on when you press triangle, there are various combos you’ll be able to do. Unless you auto-lock on your target, it can be awkward to land a punch or kick because the combat is so frantic. Another issue arises when you knock your opponent to the ground and then have to wait four or five seconds for them to get back up; in this time you can’t do any damage and waiting can become tiresome.

Regardless of these minor qualms, the range of attacks and in-game action stretches much farther than two strike buttons. Holding in L1 and pressing one of the relevant buttons down the side of the screen will open up dialogue, animations and new attacks, differentiating between the 50 plus characters, each with a different Battle Style like Stand User and Vampire. The Dual Combo gives your team a unique attack, but the Dual Heat Attack provides the best kind of attack and my favourite element of the game. Pressing both L1 and R1 together will activate a wonderful animation between your two characters, and if you successfully charge at your enemy you’ll double team in the most glorious of ways, also taking off a substantial amount of health away from your opponent.

Between fights and specific chapters, you can explore incredibly small areas, but it’s not really a case of exploring. You have a very short area in which you can chat with the characters around you and replay specific battles, but it doesn’t really bring anything special to the table. It is the batshit insane story, dialogue, and environments that make JoJo’s Bizarre Adventure: Eyes of Heaven so much fun. If you try to take it seriously then its glory will be lost on you. The visuals are something spectacular and the cel-shaded art style makes it such a treat on the eyes. Every environment is so detailed and alive, with a varied colour palette making it pop and stun in equal measure. CyberConnect2 has such a gift in making their worlds some of the best out there, and Eyes of Heaven is no different. Every fight you have remains clear and focused, never blurring or stuttering in frame rate. It’s stunning in every way and certainly one of the best looking fighters on the current gen.

Outside of the wonderful story mode, you can duke it out in a Vs mode where you can choose between all the characters, or even take the fight online and lose in true fashion like I did. JoJo’s Bizarre Adventure: Eyes of Heaven is such a fun fighter with a range of environments and characters all with different styles so you always need to adapt. Throw in a bizarre story with loveably eccentric characters and you’ll find plenty of fun to be had. There are also plenty of collectables to unlock, with a shop to buy even more stuff from, and you can edit characters amongst other stuff to keep the most diehard JoJo fan happy. Don’t be put off by the craziness, embrace it. If you like fighters that don’t take themselves seriously, this is the game to get.

JoJo’s Bizarre Adventure: Eyes in Heaven features fun combat and a crazy story you’ll find hard not to get sucked into.