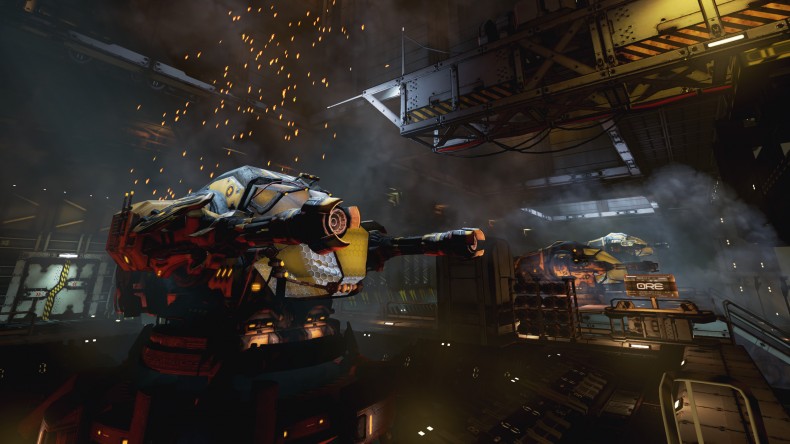 Sitting in a gun emplacement on-board a massive starship, shooting waves of enemy fighters as they dart amongst the stars and target you in a beautiful dance of space combat. Indeed, this is the kind of experience VR is exceptional at: the evolution of the light-gun genre.

And like the light-gun genre before it, Gunjack is comprised of extremely simple mechanics and an equally straightforward objective: look where you want to shoot, shoot, destroy enemies to amass points, rinse and repeat. Of course there’s some setup involved. You are a Gunjack amongst the crew of a mining platform with the task of defending said platform against any space pirates that intend to destroy or steal from you. This is also part of the EVE Online universe, although its ties are as superficial as the previous sentence. Regardless, it’s a strong enough premise to get you to strap on your favourite VR headset and blast away at a selection of attack crafts as they exit hyperspace all around you and start attacking. With whichever headset you happen to have – Oculus Rift, Samsung Gear VR, or HTC Vive – the controls are practically the same, leaving you targeting your enemies with head movement, and firing main weapons and special power-ups with your controller input. Main weapons need to be reloaded on occasion and managing your active ammo and when to reload requires some forethought. Meanwhile, the power-ups offer some neat abilities, such as restoring your gun emplacement’s health, clearing the immediate area of all threats in a massive explosion, or the particularly nifty slow motion bubble for dealing with your sprightlier foes.

This is a seated experience and you’ll be punished for standing in the first instance, as the opening cinematic flies you through the mining facility at a brisk pace that quickly wreaks your balance. Whether seated comfortably on a chair or as a crumpled mess (due to the aforementioned balance wreaking), the presence to make you feel like you’re really in a gun emplacement is striking. The one-to-one tracking when you move your head, the sound of your cannons firing or the creaking of the mechanical gimbal as the emplacement moves, the wonderfully detailed cockpit and beautifully ominous blackness of space, all do a splendid job of convincing you you’re there. Moreover, cracks in the glass as you take enemy fire as well as the red hue of alerts to damage and enemy craft incoming adds to the presence spectacularly. Indeed, Gunjack is a handsome devil. Of course gunning down waves of attacking crafts, which come in a modest variety of shapes and sizes with equally varied attack and movement patterns, quickly gets repetitive. Fortunately online leaderboards adds a nice competitive objective rather than simply conquering all levels, although if you truly want to claim your Gunjack title you’ll need to three star each of them. This won’t take long, with the whole experience easily over with inside of a couple of hours. Yet despite this repetition and lack of content, there’s still some longevity in it. Gunjack is fun, plain and simple. Much like its physical arcade counterparts, such as light-gun shooter Time Crisis, or the better analogy of the cockpit-shooter where you sit within a massive prop like the Atari Star Wars Arcade, chasing high scores and enjoying the fast-paced casual arcade shooting, is enough to bring you back for short sessions time and time again.

VR certainly breathes new life into this kind of genre, and Gunjack is a terrific example of this. Here you have a massive cockpit enclosure with superb detailing and highly immersive visuals and sound, but condensed into a VR headset – oh, and the beefy computer required to run it – and that opens up huge possibilities for this kind of experience. Arcade was pretty much dead before, but this is absolutely the final nail in the coffin, and what an intense and fun nail it turned out to be.

Gunjack’s slim ties to the EVE universe don't stop it from being a thoroughly entertaining arcade shooter that recreates the cockpit-shooter/light-gun genre within a VR space wonderfully without the need for peripherals or huge enclosures.

Opinion: My Eyes, The Goggles Do…Something!