Battleborn has issues, but also more moments of greatness than other titles 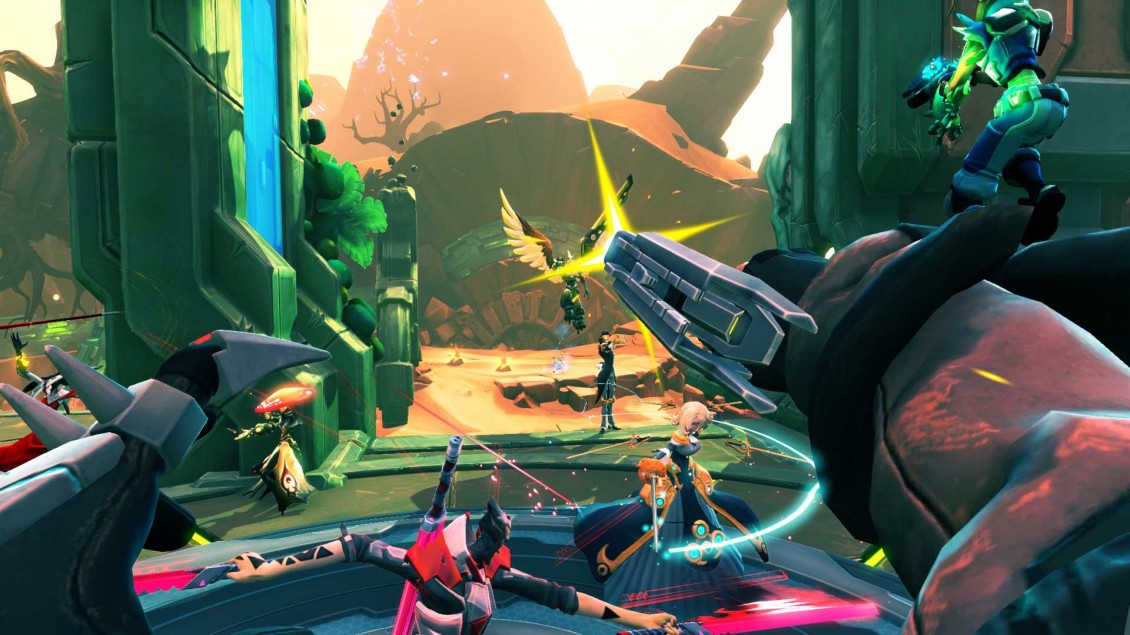 Bar a few sarcastic jokes on Twitter, and brief chats on the podcast I have remained fairly tight lipped on my thoughts regarding Battleborn, despite playing it for a number of hours. I first went hands on with it at E3 almost a year ago and came away lukewarm: it was a cool idea but it didn’t feel all that great, and back then I only played the co-op campaign for about 20 minutes. Further events came and went and I played more and more, with my general opinion going down almost every time. While it had it’s moments it was just too bland, and the characters felt unmemorable, with me referring to them as “mushroom guy” or “Call of Duty soldier man”. It’s fair to say that prior to launch week I was one of Battleborn’s biggest critics, I just didn’t say it all that much.

That opinion started to change when I went down to 2K’s office to play some of the co-op campaign just days before release. A slight misunderstanding on the date meant that I was the only member of the press there and I was playing with four members of the 2K team, who had way more experience than me. Normally this situation would make a shooter near unplayable for the critic, but in the co-op setting it worked perfectly. They carried me while I learned the ropes, and by the end of the day I was able to actually contribute in meaningful ways.

This is where I started to see Battleborn’s merits. Sure, most of the time it will feel very average and like nothing special, but sometimes something genuinely unexpected or awesome will happen and it makes all the mediocrity just about worth it. When playing the co-op there is a mission where you must escort a very weak spider turret thing (look I still don’t know the names of stuff!) across the level. The initial section, once you have collected enough of the gold stuff (again, I don’t know the name) to power it up, is only a short walk, and should be relatively easy. But we fucked up at least five times. Then, somehow, after being fairly bad for most of the day, I rock up as Rath (a name I do know!) and thanks to my incredible Rath-skills, manage to clear out the wave that we can never get past with one well placed ult; bob’s your uncle we manage to make it through to the next part. This was the first time that day that Battleborn really felt good: I was a badass and had made an incredible play. The feeling was not too unlike the one I get when playing Dota and hit the game-turning five man black hole (jokes… I never hit five man black holes because I’m shit at Enigma, but you get the idea). After this things started to click, for the rest of the day I was doing a ton of work on the battlefield and we rinsed through many of the levels. When it was time to leave I almost missed my train as we really wanted to finish the mission we were on, and surprisingly I didn’t want to stop playing at all.

Then a few days later when my copy arrives I jump into the multiplayer. Things get off to a bad start as the first game mode, the one with the capture points, to be honest sucks. It doesn’t really fit with the hero design, anyone playing as Oscar Mike can force you off a point with his incendiary grenades that have a stupidly low cooldown, and it left me very disappointed. The last game mode, where you must guide minions into this big mouth-furnace-thing also left me cold, it just didn’t gel with me, despite seeming to work quite well. So with my hopes for Battleborn again falling low I tired the second mode, which is basically a single lane MOBA, and this is where those moments of greatness started to appear again.

My first game I picked the french aristocrat robot sniper (Marquis) and absolutely wrecked everyone. I went 9-0-9, killed the most minions and did the most hero damage. This was one of the few games that was 100% enjoyable, and it restored my faith that there is something of merit to Battleborn. The next game was a crushing defeat while I played man mountain Montana, but unlike the other modes where defeat sapped all the enjoyment of the game, this was at least somewhat enjoyable, and more importantly it was easy to identify where we went wrong. Yet another similarity to a MOBA. Over the course of five or six more hours with this mode it became clear that this was the one area of Battleborn I can play alone and still enjoy. The other modes infuriated me beyond belief, but this one, while still irritating at times, never made me scream “OH WOULD YOU PLEASE FUCK OFF!” at the TV when playing. None of the common heroes seem to have a major advantage in this mode, the longer game time means teams can have and lose big advantages fairly easily, and the tactical elements of choosing when to push and when to defend add an extra strategic layer.

I think one of the reasons why I am more sympathetic towards Battleborn than most is because of the similarities to Dota. One thing I always say about Dota is that at least 90% of the time, it feels average, fun but not amazing, but the reason you play is for those 10% of moments the are unlike anything else in video games. Battleborn probably doesn’t have quite the same ratio, but it’s a similar premise, most of what you play probably won’t be groundbreaking, but those few moments of brilliance make it worth playing.

There are a multitude of other issues, most of which I think Mick hit on in his review. Locking characters behind levels is an issue that gives higher level players an advantage, which wouldn’t be too bad if the matchmaking wasn’t so awful. Some characters feel like they have abilities that would be better suited for others and there are a few balance issues, as well as a slight lack of content. Also they can seriously piss off with all the EULAs and advertisements when you start up the game.

I don’t see myself playing hours upon hours of Battleborn, but for now it has my attention. This one mode has just enough moments of magic to make it worth playing, and much like Dota, when it all clicks into place there are few experiences like it.

If you’re buying Battleborn, support us by doing so via these links:

eSports! I joined God is a Geek all the way back in September 2013 and since then have spent most of my time on Dota 2, and occasionally posting the odd review, news article or totally wrong predictions for The International. When I am not playing Dota I can probably be seen watching some kind of strange eSport or begging for more Twitter followers (@MikeStubbsy if you are interested). Aside from GiaG I am a computing student, football coach and major Apple fanboy.
MORE LIKE THIS
2kBattlebornGearbox