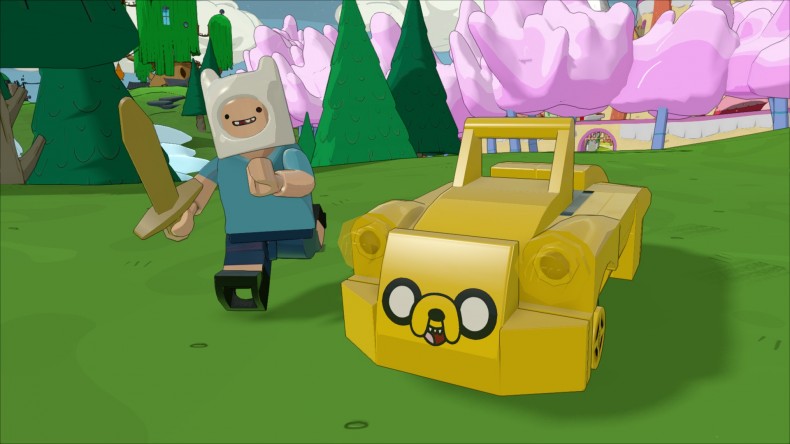 The thing that bothers most people about the Toys to Life business model, is the expected yearly update that requires the purchase of a new game, new portals and starter packs – Plug a whole load of new figures. LEGO Dimensions bucks the trend in a very unique way – For 2016, there is no LEGO Dimensions 2, just new waves of content.

If you already own LEGO Dimensions, you can buy any Story Mode, Level Park, Team Pack or Fun Pack and it just works with your setup. Rather than there being a new game disc, new levels are downloaded as part of the existing LEGO Dimensions game, and are unlocked when the correct figures are scanned. It’s a brave move, and it’s nice to know that all you need is the original Starter Set, to get involved with LEGO Dimension’s second year of content.

So what about that new content? In the so-called Wave 6 of packs, we’ve got a Story Pack, two Level Packs, two Team Packs and a Fun Pack, covering a range of licensed characters that really will appeal to all ages.

First up is something new to LEGO Dimensions Wave 2 – Story Packs. These larger packs consist of a brand new themed playset to build and place over the existing LEGO portal, alongside a new figure, vehicle and gadget. In-game, this also unlocks a mini Story Mode, consisting of multiple levels, plus a Ghostbusters adventure world. The very first Story Pack is based around 2016’s Ghostbusters reboot, and fits the entire plot of the film through six reasonably large levels. While this Story Pack only comes with a figure of heroine Abby Yates, the other three Ghostbusters are controllable companions in each level, with each one having the own abilities, used to bypass a variety of puzzles. As for the Story Mode itself, it’s exactly what you’d expect from a LEGO game based on a blockbuster movie – Levels that cleverly convey the main plot points, all coloured with a very silly sense of humour. It’s a very good set of levels as well, and while LEGO Dimension’s approach to puzzling isn’t exactly complex, there are plenty of new types of hazard to offer something new to veterans of Year One.

However, I must mention that I had some real problems with crashes throughout my time with Year Two’s content so far, where it would crash at the end of levels, losing my progress. It doesn’t help that this Story Pack’s progression is slightly different to the usual LEGO Dimensions Story Mode. For this Story Pack, the next level isn’t automatically unlocked when you finish the previous one – You have to go into the Ghostbusters adventure world, and perform a brief task before the next level is accessible. Unfortunately, because my game kept crashing, I was unaware of this, so seriously struggled to progress until a support representative helped out.

However, even with those issues, I loved this pack. I would have wished for a different vehicle or gadget, instead of another variation on the already-released Ecto-1 figure, but it’s still fun to race around adventure worlds with the siren blaring, so it’s not exactly a problem.

My verdict? If you’ve seen the film or have no intention of doing so, it’s definitely worth picking this pack up to start you off in Year Two. If you haven’t seen the film and want to, you’ll probably want to do that first, as this pack will spoil everything for you.

Next time is a Level Pack based on one of the most popular animated series of the past decade, Adventure Time, and I cannot be happier. Included is a figure of Finn, the Jakemobile, and an Ancient War Elephant, and they’ve done a fantastic job in keeping these figures true to the cartoon.

That level of quality is carried through to the level itself, where the game’s visuals are given a cel-shaded lick of paint, and it looks absolutely fantastic. It feels like playing the cartoon, even though everything is uniquely LEGO. Based on a couple of Adventure Time episodes, this lengthy single level takes Finn on a quest to Enchiridion and generally do things that heroes do.

Honestly, if you are a fan of Adventure Time then this honestly is a must-buy pack, as it does such a good job with the source material.

If you need proof of how far the net has been cast for licensed properties in Year Two, here is a level pack based on the first Mission Impossible film, tiny Tom Cruise figure and all. It might be a strange idea for a LEGO Dimensions pack, but there’s a lot of level for your money here, with a ton of areas and a lot of action – Plus the standard LEGO attempts at humour. This is a level pack that shouldn’t work, but it strangely does. LEGO Ethan Hunt’s abilities are pretty cool and suitably stealthy, while the included sports car any motorcycle are pretty cool models.

This was another level I had issues completing because of freezes, but hopefully these issues will be resolved soon, if not already.

Technical issues aside, this is another excellent Level Pack, that is certainly worth your time.

Onto the Team packs, and we’re returning to the World of Ooo with the Adventure Time Team Pack. With no level content to speak of, the main attraction for buying these packs is for characters you love, or useful abilities for completing the game. At this point we don’t know how useful Jake and Lumpy Space Princess are as characters, but if you loved the Adventure Time level pack enough, you’ll probably want this pack as well. Both figures look great and true to the characters, and Jake’s shape-changing skills are utilised incredibly well in his in-game abilities. Meanwhile, the included BMO model is just awesome, with it’s own unique ability of activating special BMO Docking Stations, which will likely make this a required pack for completionists. The Lumpy Car isn’t so special, with common abilities – Although Lumpy Space Princess is only the second character to have the Rainbow Brick Blow Up ability, after Uni Kitty

Overall, this is a pack for Adventure Time fans and completionists, but not essential for everyone else. Considering there have been a ton of LEGO Harry Potter games over the years, it was amazing that Year One of LEGO Dimensions didn’t have any Harry Potter content, however that has changed with the Harry Potter Team Pack. Included in this pack is young Potter himself, the deadly Lord Voldemort, the Hogwarts Train and the Weasley’s Enchanted Car.

Being wizards, both Harry and Voldemort are adept magic users, and between them this pack offers players a ton of incredibly useful abilities – In fact, most of the basic common abilities are available here, making this team a great pack to buy for those looking to get every Gold Brick.

As for their vehicles, they offer a small handful of useful abilities, whether it be on land, in the air and even under the sea. Even though there isn’t a level assigned to this pack, the breadth of abilities contained in this pack, and the continued popularity of Harry Potter, will likely put this at the top of the list for many people.

Finally, we come to proof that a lot of LEGO Dimensions Year Two content is very much geared towards 30-somethings and upwards. Even though this A-Team Fun Pack likely has more in common with the more recent movie adaptation, B.A. Baracus is truly a hero for adults of a certain age. Even if he isn’t voiced by Mr. T, he’s got a couple of useful abilities, especially the all new A-Team Master Builder ability, that allows BA to build items out of parts – He is the only character at the moment to have this ability as well, so it remains to be seen if he is required to get all of the Gold bricks. If you’re wondering where the rest of the team are, well B.A can also change in Face, Hannibal and of course, Murdoch at any time.

Of course, it wouldn’t be the A-Team without that van – The model is absolutely fantastic, and probably a selling point for many people by itself! An awesome Fun Pack, and no mistake.

With Wave 6, LEGO Dimensions Year 2 has gotten off to an awesome start. All of the packs in this wave have a reason to purchase them, either because you love the characters, or some unique abilities for obtaining collectibles. All in all, a great wave of content – Your wallet is going to hate you.

A veteran GIAG member, I've been writing, talking and taping for the site since 2011
MORE LIKE THIS
Adventure TimeGhostbustersharry potterLEGO Dimensions