The Little Acre could be an adventure of a lifetime 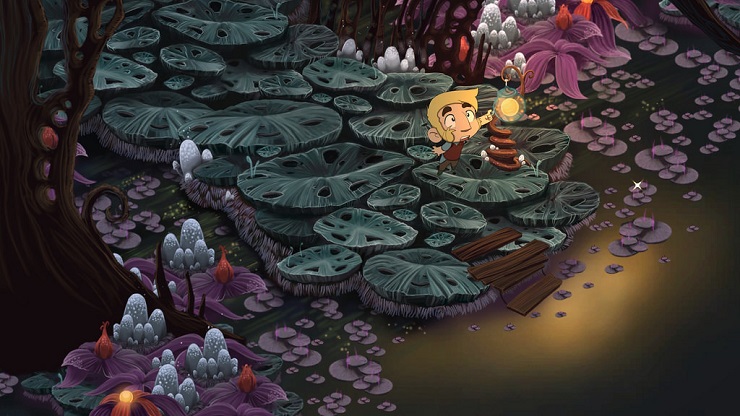 When it comes to point and click games, I’d consider myself a bit of a pleb. I didn’t really take notice of the genre until Telltale games caught my eye with The Walking Dead. I missed out on the Grim Fandangos, Secret of Monkey Islands, and Broken Swords when I was younger. I was naive, something we can all relate too. Since the release of ever more successful Point and Click games, I thought it was about time that I started looking out for them. And where better to start than Pewter Games’ The Little Acre.

Hailing from Dublin, Ireland, Pewter Games have set out to bring a slice of their culture to home consoles in The Little Acre. Set in rural Ireland, and a few other locations that remain to be seen, Aidan and his daughter, Lily, are set to go on the adventure of a lifetime as they start to understand why Aidan’s father went missing.

The Little Acre opens with a faint clue as to what happens with Aidan’s father, as we see two unknown figures dance around an unfamiliar realm, trying to escape. We quickly cut away to Aidan, who is trying to go about his daily business without waking his daughter – pushing the blame on to his dog, Dougal. Even from the offset we learn to care for Little Acre’s characters, establishing a deep family tie that links to the forgotten parents that weave through the narrative, both explicitly and implicitly. Soon we find out the nature of Aidan’s father’s work and we are thrown into the world of Clofera. That’s unfortunately where the preview ends, a glimpse at a magical world and the sinister feeling that all is not quite right with the disappearance of Aidan’s Father.

Exploring the worlds available is unbelievably satisfying, almost reminiscent of Dragon’s Lair in terms. Everything feels alive and crafted with love, right down to the charming and human descriptions of items. There’s a subtlety that blends key items in the area with flavour items that never feels labouring or dull.  Then when you start to adjust to the visual stylings, The Little Acre flips the world on its head and takes you to Clofera, a mystical world with a different art direction than the real world. Not only are both impressive, but they feel intertwined. Even though there is clearly a change in aesthetics the charm remains and I would even go as far as saying the way the switches blend seamlessly early on shows an understanding of the craft like no other. Just like their mastery of mixing worlds, Pewter Games have managed to prove that they know their way around a Point and Click game. Puzzles in the early sections never feel too laborious, in fact they were pretty easy if you put a bit of thought into it. And even if you do get stuck there is a hints section that can guide you in the right direction – or just continue asking for hints until you are provided with the answer. This approach levels the playing field for younger players who might not fully understand the clues and relieves the stress that might come from, let’s say, that infamous fucking goat scene from Broken Sword – I kind of lied when I said I didn’t play Broken Sword, I did and I got stuck and never went back.

So far, what I have seen of The Little Acre has been incredibly enjoyable, albeit rather restrained. There are some small cracks visible, like the potential to continue on without much in the way of difficult puzzles or the lingering feeling that The Little Acre might be drastically short. That being said, Pewter Games seem like they are on the right track and I’m very much looking forward to exploring the rest of Ireland and Clefora with Aidan & Lily.