previous
Battlestar Galactica Deadlock announced for PlayStation 4, Xbox One and PC
random
next
PES 2018 details including a release date have been leaked by an Xbox Store listing
0 comments

Children of Zodiarcs is a tactical RPG with a big difference 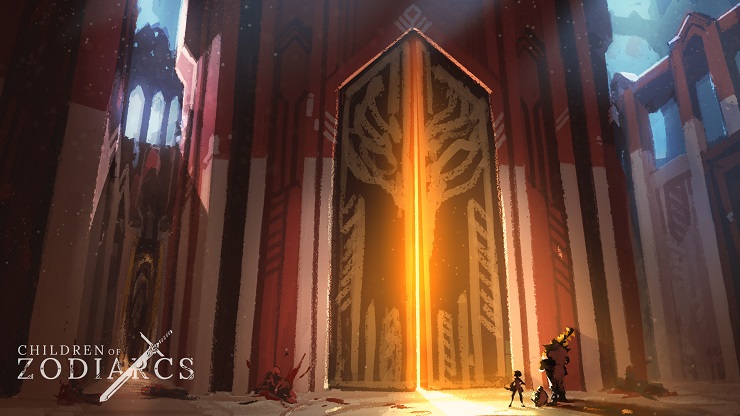 Children of Zodiarcs started life as a Kickstarter campaign from a small group of industry veterans and pros that have decided to branch out on their own and create a passion project, as many nostalgia-inducing throwback games to be. Zodiarcs positions itself as a tactical RPG mixed with dashes of collectible card gaming and table top dice rolling. Not a mix that is completely alien nowadays but certainly something of a challenge to get right when you consider the amount of balancing required for each of these types of games on their own. Overall, though, Zodiarcs seems to be doing a respectable job of it.

Narratively the game delivers a compelling story so far and provides just enough world-building without taking away control from you for too long. This is a god-send for this kind of game because the narrative is delivered in the same way that Final Fantasy Tactics – clearly a huge influence – and Fire Emblem with non-interactive sections of storytelling preluding each battle. While this is a wholly expected way of delivering story in such a game, it does mean that if you have little interest in the combat elements of the game there’s not a whole lot else to draw you in at this point of development. When it comes to combat, though, I had a lot of fun with the challenge that Children of Zodiarcs presented. Battles are fought on grids, with your view isometrically locked in place surveying everything. Characters can move up obstacles that are one unit high, such as boxes and platforms, but in this early stage of the game the high ground seems to offer no discernible advantage in the fight itself. Positioning, on the other hand, is important as there are several skills that will affect an area at your – and the enemy’s – disposal. It’s a satisfying feeling to lure an enemy into certain positions and then hitting all of them with a devastating attack or status effect that leaves them vulnerable. The trade-off, though, is that you can also hit your own party members with a bit area of effect attack so pre-planning each turn is key. As well as the area of effect attacks your primary concern is flanking as the sides and backs of your characters are vulnerable. Where they can, enemies will be looking for the backstab opportunities so that your characters aren’t able to counterattack.

Combat turns are played out by one side at a time, rather than each character on the field having their own place in the combat order. This may seem like an unimportant point, but strategically it changes the challenge level of the game. With characters having their own individual turn order, you’re able to target the enemy that’s going to attack next to try and remove them from the fight before they can do anything. It also adds a layer of unpredictability to what the enemies will do, since all the units will be acting at once and most likely not in the way that you thought, making it necessary to adapt your strategy – sometimes drastically – with every turn rather than per character move. More moving pieces creates a greater challenge overall. Honestly, there were times when I found Zodiarcs to be brutally challenging but it never felt unfair because of how the combat is played out. The collectible card game portion of the game governs your characters’ abilities in a fight, as these are drawn out from your deck random – as you would expect from a card game – and so your there is an element of luck to the abilities that will be available to you at the outset. Current there’s no way to mulligan a card, so if you draw support abilities and no attacks, you’re going to be looking for a safe place to stay clear of combat until you can draw an attack from your deck. Children of Zodiarcs balances the abilities well, but I’m not sure I enjoy the element of randomness in the card-based mechanics. The thing to keep in mind is that all abilities are used from the card, whether that is an attack, heal, status debuff or buff. The only thing you can do without playing a card is move, guard, and draw more cards – the last two costing you an action instead of using an ability card.

After playing a card, and selecting where you want to direct that ability, you’re presented with a set of dice on your screen that will now determine the modifiers of the ability itself and whether you trigger any additional effects. The dice rolling is a drag-and-release action that you need to manually make – which at least gives you the feeling of controlling your fate – with the option of rerolling up to two dice if you’re unhappy with the outcome. Especially useful when you obtain dice that have faces that give 3 or more bonus attack, for example. Further effects that the dice can give you are small amounts of healing or damage mitigation on counterattacks. This piece of randomness, unlike the drawing of cards from your deck, I am happy with because it’s a visualisation of the random rolls that you normally wouldn’t even see in RPGs rather than randomising the abilities that you can use. It puts an aspect of RPGs that’s normally hidden in your hands, thus taking away that feeling of being cheated by the game’s systems. At this point, only the first nine missions are available to play and it this point I’m still coming to terms with the random drawing of cards and rolling dice to determine the outcome of an attack. The former I’m having a little trouble adjusting to for a tactical RPG since it has the potential to severely limit your actions and the combination of abilities that you can execute; however, the dice rolling is a wonderful sense of control that’s given to you.

I’m not going to be spoiling the story for you but so far it’s hooking me into the fantastical world of ancient technologies and mysteries. There’s an interesting world lore that I want to uncover and the characters, while a little cliché at points, are growing on me. The story is compelling me to clamour for more, and so I wait with baited breath for future updates for Children of the Zodiarcs.