previous
Splatoon 2's huge 3.0.0 update is now live
random
next
A chat with Robert Craighead, the actor behind Brok in God of War
0 comments 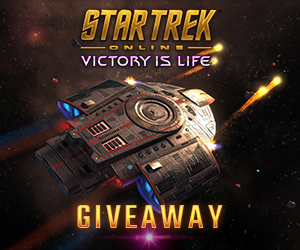 Star Trek Online’s fourth major expansion, Victory is Life, will release on PC in June and on consoles at a later date. The update takes Captains on a journey to the Gamma Quadrant, where they will team up with crew members from Deep Space Nine to battle the Hur’q. This includes Quark (Armin Shimerman), Odo (René Auberjonois), Kira (Nana Visitor) and nine other characters voiced by the actors who originated the roles on Star Trek: Deep Space Nine. The expansion also introduces a brand new Jem’Hadar playable faction, increased level cap, seven new episodes, new queue, added progression system and all-new Sector Battlezone.

We’ve had plenty to say about Star Trek Online over the years, since beta in 2010. To celebrate their fourth major expansion we’re giving away a whole host of goodies for regular readers of God is a Geek. The Tactical Escort Retrofit was declared a new type of warship created to fight the Borg, but was later revived to fight the Dominion War. Starfleet updated the vessel with the latest equipment available in the early 25th Century, including a universal cloaking device.

The Stalker Stealth Fighter is lightly armed, fast and maneuverable. The ship’s energy signature is low, making it hard to detect at long distance until it attacks.

To Redeem Your Code:

*These codes are only eligible for Federation and TOS Captains on the PC version of Star Trek Online and can only be redeemed by one character on a single account.