previous
World of Tanks is hitting retail for the first time ever.
random
next
The newest How to Hitman video for HITMAN 2 showcases all the tools available to you beginning November
0 comments

By making you care about dinosaurs, Parkasaurus could be something special 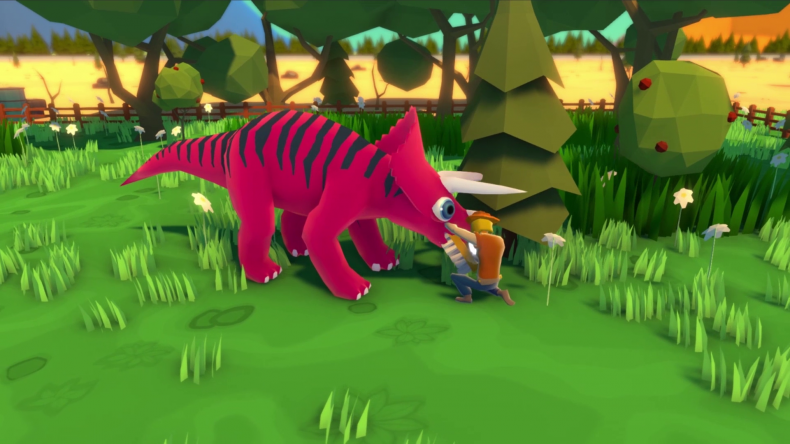 There’s bedlam in the park. Patrons are running everywhere, the toilets are on fire, and above all the ruckus and screams, a wave of ferocious, prehistoric roars can be heard. And why? Well, one of my dinosaurs rammed through the fence because they didn’t have a toy to play with. Oh and did I mention it was a bright pink stegosaurus called Rufus?

And that should tell you pretty much all you need to know up front about Parkasaurus. It mixes a Theme Park style management sim with dinosaurs and a bucket load of colourful paint to produce a title that’s as garishly cheery and endearing as it is engaging and interesting. Currently the game is in an early access, which it openly admits, but there’s plenty here even at the early stages to make this well worth a look.

It all starts off in a fairly standard way, with a tutorial showing you the ropes of how to lay down paths, essential park facilities, how to hire staff, and most importantly, create exhibits for your dinosaurs to roam around in. But rather than your standard pens, some thought has gone into the wants and needs of the dinosaurs, which is a recurring theme throughout. Because if Michael Crichton’s thriller has taught us anything, you don’t want angry dinosaurs in your park! So, when creating exhibits you need to consider various factors such as flora and rock placement, as well as how much water to include to create a biosphere environment that your chosen dinosaurs will enjoy and thrive in. Get it wrong, and your dinosaurs will become very unhappy, making your time looking after them more troublesome. The dinosaurs themselves begin as eggs and hatch, so as they develop, they mirror the growth of your park at a very primal level and it’s hard not to form an attachment from the outset. They’re all also named from birth (hence Rufus earlier) which only furthers your bond to them. The dinos will also have a level of happiness that changes over time, depending on various needs such as hunger, space, privacy and even how entertained they are (yes really!) And so it’s your job to keep them happy as they develop into adults, ensuring all their needs are met. Having happy dinosaurs at the end of each day rewards the player with hearts, a currency that is used to purchase items to further improve the exhibits and even unlock new breeds of dinosaur to put into your park.

You’d be forgiven at this point for failing to realise that the apparent main purpose is not to breed and maintain the emotional state of long-extinct reptiles, but it is in fact to make money, and this is where the familiar territory of Theme Park and its many clones throughout the years kicks in. You can charge an entry fee for your park, and also give guests the option to donate additional money to you through various donation boxes. Keeping them happy is key to making them stay longer, spend more money and dropping a bigger donation before they leave. More money means you can open up more exhibits and hire more staff for your ever-expanding prehistoric enterprise. The myriad unlockable extras in the game are bought with a third currency, research, which you employ scientists to generate for you over real-time. This can be spent on a wide variety of cosmetic upgrades, shops, decorations, as well as advertising campaigns to encourage more footfall into your park each day. Played the right way, you’ll find that you’ll be earning research points pretty quickly throughout and whilst the cost of upgrades increases as you get further along the research tree branches, they never feel extortionate or out of reach. It means you can always have an achievable goal for what to research next, never having to wait too long until you’ve earned your next upgrade.

In addition to all that, there’s also an additional treasure hunt mini-game that you can play every few minutes that allows you to search for dinosaur bones and tracks on your own stripped back archaeological dig. It simplistic in nature, with you essentially digging away at squares on a grid to reveal what’s underneath, and doesn’t provide much challenge, but is a nice change of pace from the main game, and provides a way of necessarily unlocking the items you’ll need to trade for new dinosaur eggs to further broaden your park’s horizons.

It hasn’t been without a few niggles though, although they are just that. The first I noticed was that as you earn more money and expand your park, you level up, advancing through what the game calls “tiers”. I had a tutorial mission that required me to get to tier 3 to progress, and it bugged out and didn’t register my progression, even after I was up to tier 9. It meant I had a quest reminder constantly that I couldn’t complete through no fault of my own. When I reloaded for another session, the issue had disappeared though, so likely it’s a bug that has now been fixed. I would also prefer more progression. The main mode is a kind of sandbox mode, where your challenge is to basically play for as long as you want. I suppose the subtle goal is to earn as much money as possible and, I guess, unlock everything available, but it feels a little unstructured. I’d prefer mission-based levels in the single player, like in Two Point Hospital, as this still gives you free rein to enjoy what’s on offer, but gives you something to work for each time with a well-designed challenge in place. Without it, it can feel a little open-ended, and after a while, feel a little flat. It’s also very fiddly to change the size of an exhibit, which is particularly annoying if Clementine the Triceratops is having a meltdown because she needs more space.

Having said that, Parkasaurus is incredibly addictive, because it makes you care more about the dinosaurs than your visitors. In doing so it differentiates itself, and becomes moreish at the same time. It’s a masterstroke that means it will appeal to those who love Theme Park-likes as well as titles like Animal Crossing or the Creatures series from the 1990s. Making your park millions becomes secondary to making sure the dinosaurs have everything they need, and research and mini-games provide the option of opening up more species for you to take care of and nurture. It doesn’t take itself too seriously, and that only make it more charming. Sure it’s got some teething problems, but being in early access, should see the bugs fixed. And if they are, Parkasaurus could well be worth a look.

Now if you’ll excuse me, I need to go and buy Rufus a toy.

Parkasaurus is out on PC via Early Access now.