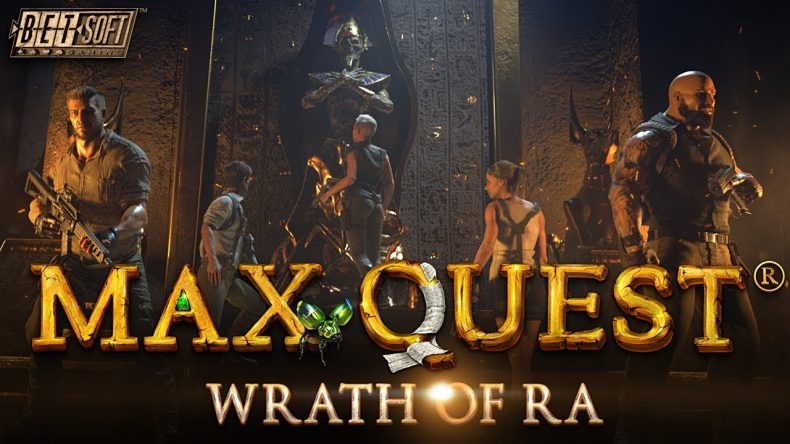 There are points throughout time in any industry which sees new standards being set, laying down new foundations that help to steer others in a different and exciting direction. 20-old years ago it was Novomatic releasing the Book of Ra™. Time travels forward and the past has reawakened with BetSoft now at the helm of the slot icon that is ‘Ra’. The release of Max Quest: Wrath of Ra™, is looking to change EVERYTHING about online gambling – especially slots –  FOREVER!

We will be brave enough to say that online gambling really needs a big change. For all the movie titles out there that developers snap up, it’s the same old format which has been in place for over two long decades.

The natural course of order would be to utilize the phenomenal skills these game-makers have and to push the boundaries so far out as to make people question: “is this is a game for gambling or one that is purely based on gameplay.” Well, why not both?

Max Quest: Wrath of Ra™ blends immersive gaming with slot machines. It’s like console video gaming with real money payouts to be won. The game breaks all genres and it is impossible to label. The game takes new heights as a multiplayer format and experience that literally takes you in and around the tombs of ancient Egypt to fight against all the evils in order to win your reward.

If by now your interest is immediately struck, there are free online slots of this game out there where would-be casino players can play the online casino game themselves, without the need to download or deposit to play.

Professed to be ‘a new era in gaming’ makes this a modest statement from the BetSoft team. Never has a role-playing game been made. This is total action and immersive adventure that brings together six-players, shooting their way through a subterranean maze, whilst being fought back by wild mummies, scarabs and Pharaoh Gods.

As you shoot you win money, real money and points. The points turn into player powers and rewards, the cash you keep. With this, you can purchase more ammunition and progress through further rounds and levels that the game offers in abundance.

BetSoft went on to win numerous awards for this ground-breaking game, hardly surprising given the gravitas of importance it holds for future developments for online casinos and that could also impact the presentation of video gaming. We’ve long prayed that achievements can be rewarded with real money, outside of video gaming tournaments.

Max Quest™ won’t change anything overnight, but its importance will forever be the lynchpin that created a new form of gaming for the future. So, if you spend hours at a time playing video games with nothing but a high score to show for it at the end, now you have a Shoot-Em-Up that finally pays out!