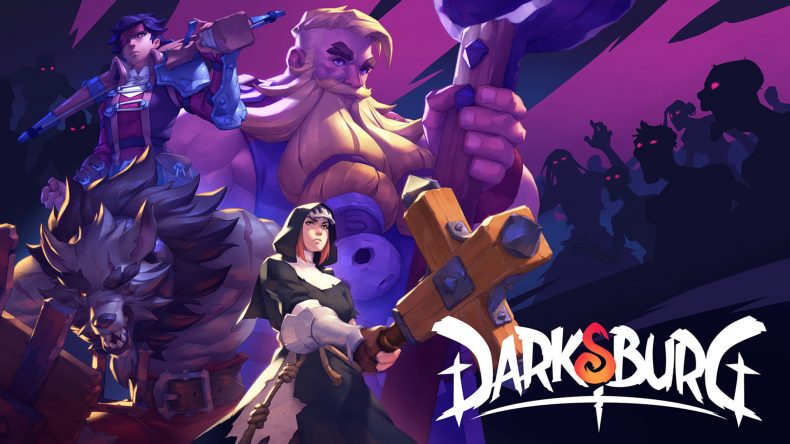 Planting their flag in the battle-ravaged middle ground between Left 4 Dead, Vermintide and (lazy reach) Diablo, Shiro Games have created Darksburg, an isometric foray into team-based survival. Set in the titular town overrun by a horde of the undead, Darksburg sees four would-be heroes facing down the wave of zombies and monsters, or, perhaps, a team of four evil Revenants attmempting to stop the heroes doing just that.

In the two primary modes, you’ll pick from Sister Abigail who swings a giant crucifix, somewhat friendly werewolf Varag, frying-pan wielding cook Runolf who can dish up a healing stew mid-fight, and Rose, who uses a crossbow and a cute, furry rodent named Twig to get the job done. Having spent some time with all four, Sister Abigail remains my favourite. Her attacks are devastating, but she’s also able to a plant a bell that distracts the horde. On the other side are the Revenants, who come into play during the PvP mode such as the Raven Master and the Burning Witch. Similarly to Vermintide, you can carry one bandage at a time and must either use it on yourself or a teammate. Corners and obstacles are handy for funnelling the horde or getting some life-saving distance, and if you get separated from your group at the wrong moment, you’re probably going to die. You might get lucky and get revived, but don’t always bank on it.

Right now, there are four maps and three modes, my favourite being the Last Stand mode where you simply have to survive as long as you can against waves of enemies. An Early Access Roadmap promises a total of 6 survivors and 6 revenants in total, as well as more maps, enemies and bosses. Right now the main antagonist is Baron von Darksburg, who can spawn randomly in a match and is incredibly hard to defeat. The Roadmap suggests that another member of the von Darksburg family will be available to fight during the summer.

My biggest issue with Darksburg right now is that it feels somewhat bare-bones. I know it’s in Early Access and so that’s to be expected, but I’m hoping Shiro Games fill in some of the gaps. There are chests dotted around, many of which contain nothing. I don’t know if this is a bug or not, but it would be great to see some loot to find, perhaps to give you a reason to clear out the horde around a chest or watch a teammates back while they open one. If Shiro put power-ups or cosmetics in these chests, that would be pretty cool. While I had fun with it, it wasn’t enough to hold my interest for long. Each survivor is viable to play, their array of moves and animations satisfying to pull off and watch, but with nothing to chase beyond survival, it feels a little stale for me already. I’d like characters to maybe level up in a more traditional way, or perhaps to have some build diversity. As it stands, every character just has all their moves from the start and so there’s not much of a change to playstyles beyond the game modes.

As it stands, Darksburg is good fun in short doses, ideal for a half hour blast here and there but lacking in enough real variety to keep me playing for longer. Mission objectives are very straightforward and there’s nothing to make you deviate from simply surviving. It has a great art style and some strong character design, but hopefully by the time it gets a full release it has more than just some extra characters and maps; it needs a little more gameplay diversity in there, too.

Senior Content Editor Mick has been playing games for over 30 years and writing about them for around 12. After drifting from site to site for a while, settling briefly at the now-defunct Made2Game and freelancing for the gone-but-not-forgotten NintendoGamer Magazine, he came at last to rest at Godisageek. Mick has been a reviewer, staff writer and content editor here for some time, while also moonlighting a little for Red Bull Games. He has 4 kids, has written 2 novels, and sometimes even manages to pay a bill or two. You'll usually find him defending the galaxy in Destiny 2, battling evil in Diablo 3, or lurking in the background on Twitter. Find him there @Jedi_Beats_Tank, or on XBL (JediWaster247), PSN (Jedi_Waster) or Nintendo (JediWaster).
MORE LIKE THIS
DarksburgShiro games