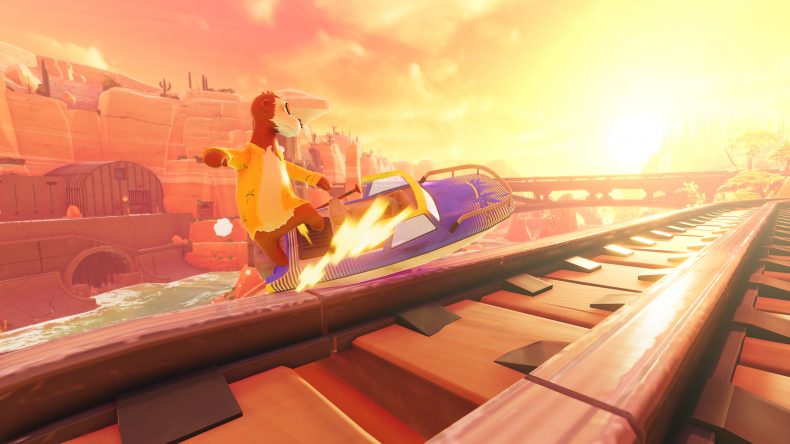 With the Tony Hawk’s Pro Skater Remasters coming in September and Skate 4 announced at EA Play, there’s still a demand for skateboarding games. Session and the Olli Olli series are just another example of the genre from over the last decade, but I need something new, dammit! Stadia is slowly gathering original titles, and one such game is Wave Break. “A new skateboarding game,” I thought. “How wonderful,” I thought. However, there’s a slight twist to Funktronic Labs’ latest title: there are no boards in sight. Instead, the action takes place in speedboats – or skateboats – where you have to complete certain challenges to advance to the next stage.

It’s all about recreating the feel of the fantastic Tony Hawk series, whereby you pull off a selection of tricks, chain them together, grind around the diverse levels, and try and get the best score possible. It took me a long time to get used to the controls – or more so the turning – because of how the camera angles work. It doesn’t move behind you, or help you to see where you’re going. You have to turn the camera manually, so if you’re making a sharp corner, it can be a pain to get the best view. Once you’re used to it, there are plenty of opportunities to pull off the perfect move. Half pipes are all over the place. Secret areas offer you new challenges, and the levels are robust enough to keep you replaying them. It can be tough to complete enough challenges to move on,and when you’re not used to the controls early on, Wave Break can get on your nerves. Whilst pulling off moves is relatively simple (pressing a button and a corresponding direction), grinding is massively frustrating. It’s manual, and I couldn’t find a way in the options to make it automatic.

Grinding is a huge part of the game. When you’re trying to manoeuvre up a pipe, rope, or palm tree and the next letter for you to be able to spell out B.R.E.A.K. is at the top, falling off is a big problem. Getting back to the start of your ascent is made worse by the camera, and it can shave off precious seconds from your time. A bar appears when you start grinding, and you need to use the stick to keep the arrow focused around the middle of it to stay level. If you go one way too quickly, your reaction is to move the other way, and the slightest press can result in you falling off. If you do fall out of your boat, you can press a button at the right time to jump back in, but if you miss you’ll have to head back to it.

There’s a story that joins the chapters together involving the mafia and the cops. It’s hugely inspired by 80s cop shows such as Miami Vice, with purple and blue neon, a banging soundtrack, and those vibrant suits all playing a part in its style. Wave Break is beautifully designed, and I’m keen to play even more. It’s all a bit silly, but it adds to the humour, and there’s also a profanity filter which gives you an idea of what to expect. Wave Break includes local co-op and multiplayer, and this makes the game quite a different experience. You’ve got guns to try and shoot your opponent, with barrels that can be exploded and other wacky ways to destroy other players. There’s also Bullet Time once your special meter fills up, allowing you to put a precise bullet through your enemies. If looking sharp is your thing, there’s quite a bit of customisation for you and your boat, allowing you to give your character its own personality.

So far, Wave Break has plenty of potential. As I played more, I got used to the controls, but only time will tell if I can overcome the awkward camera and difficult grinding system to become a much better rider than I currently am. Still, it’s a gorgeous game with plenty of different challenges to keep you playing, and the soundtrack is awesome, with sync pop to keep your blood pumping.