previous
Watch the new Resistance trailer for Watch Dogs: Legion
random
next
The Future of Gaming is Mobile
0 comments 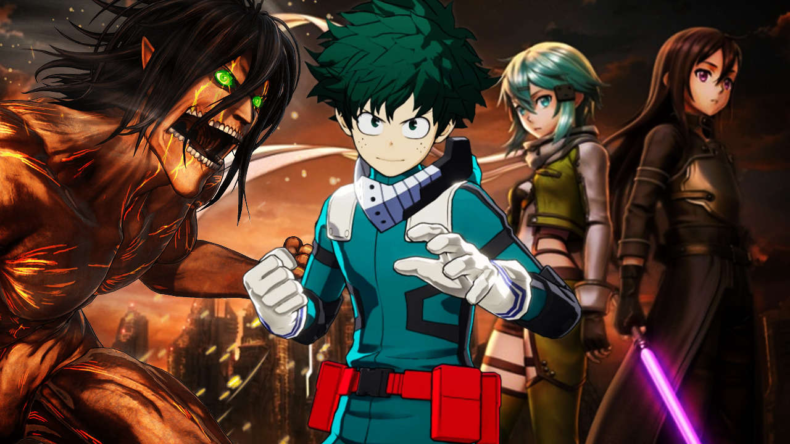 Whether you prefer hack-and-slash, action-adventure, puzzle-solving, fighting, or role-playing, there is bound to be an anime game worth your time and preference.

There is a smorgasbord of excellent titles like Dragon Ball, Project QT, Naruto, Twin Saga, Grand Fantasia, and many more. Sure, these games consist of the characters that we grew attached to from our favorite manga and anime series, but what really makes a great anime game is its engaging gameplay mechanics, sound design, and a great storyline that leaves us playing for hours and hours.

So, if you’re looking for any particular game based on the aforementioned genres, then this is just the guide you need. Strap yourselves in and get ready for one heck of a feast for your gaming and anime needs.

If you like cute monster girls, with a touch of turn-based combat and a dash of puzzle mechanics, then Project QT is the game of your dreams.

The game’s story revolves around an experiment gone wrong in the Arctic region, thereby unleashing a devastating virus that plagues the existence of humanity itself. You control four out of many other monster girls to keep the infection at bay, all while levelling up your characters and unlocking a variety of moves, weapons, and costumes (or lack thereof if you know what we mean).

And while the game is technically free to play, it does come with a slew of other unlockables that need to be purchased. This is especially useful if you wish to gain access to premium items that can help you progress through the game much quicker.

However, a word of advice is that Project QT is intended for a more mature audience. But as long as you’re 18 and above, that shouldn’t be much of a problem.

Fans of the Dragon Ball and Chrono Trigger series are very well-acquainted with the Dragon Quest series, especially since the character designs and environments are from the creator himself, Akira Toriyama.

The series is known for its deep, and at times heartbreaking storylines and very multifaceted characters that sometimes make you wish were real. What’s even more impressive is the gameplay loop gets more challenging with every step you take. And since that is the case, there’s no need for you to grind excessively.

Dragon Quest 11 retains much of its core gameplay elements from its predecessors, like exploring different worlds, defeating monsters, and exploring high areas. The battle system features a free-form camera option taken from Dragon Quest 10, allowing players to move during the battlefield without adding anything to the gameplay.

Whether or not you’re familiar with the name Hayao Miyazaki or are just a fan of Studio Ghibli in general, Ni No Kuni: Wrath of the White Witch is a title that shouldn’t be missed by fans of anime, or gaming. Everything about this game is textbook Studio Ghibli from the character design, obviously, to its engaging storytelling.

As you can tell from the gameplay, this is a classic JRPG title, consisting of an overworld for players to grind to their heart’s content, visit one town after the other, and engage in turn-based combat. What separates Ni No Kuni from other JRPG titles is the sheer brilliance of how each of its elements is crafted. Besides that, you won’t have to grind that much to progress through the story, even if you’re taking up a sidequest.

Since we’ve already mentioned Dragon Ball in this article, we might as well go ahead and mention one of the coolest 2D fighting games released from Bandai Namco Entertainment in the form of Dragon Ball FighterZ.

If you’re a fighter game mark and are familiar with the work of Arc System Works, then you must be aware of some of their other titles such as Guilty Gear and BlazBlue. And if you are indeed a fan of those titles as well as Dragon Ball itself, then you’ll be happy to know that this game includes all the right creative touches that you love in all of those series.

Every punch, kick and special move takes advantage of the Unreal Engine 4 and has been drawn in exactly the same manner as the show itself. It goes to show you how dedicated ASW are as fighting game developers and as fans of Toriyama’s fictional masterpiece.

Dragon Ball FighterZ includes a rich roster of your favorite characters on the show from Goku to Piccolo and Frieza to Majin Buu. And with controls that are easy to understand, there’s nothing stopping you from enjoying by far the most authentic-looking Dragon Ball game there is in existence.

Closers is a free-to-play 3D action MMORPG from En Masse Entertainment that deserves a spot on our list as one of the best anime games available for PC right now for more than one reason.

The aim of this game is to pick a character also known as ‘Closer,’ which is a customizable avatar that comes with their own unique progressive narrative. You form a unit of Closers collectively known as the Black Lambs and must defend your anime-inspired world from a nasty hoard of interdimensional extraterrestrials. And whether you choose to go PVP or co-op, you’ll find the gameplay to be fast-paced and filled with plenty of button-mashing excitement.

If you want to feel what it’s like to be an actual ninja (so to speak), then let this Naruto-based game teach you all there is to know. Fans of the ever-popular anime and manga series will be able to immerse themselves in the stories of the original series Naruto and its sequel known as Naruto Shippuden.

Naruto Online is a turn-based action RPG where players can assume one of five separate elemental ninjas and be able to play through the storylines of the aforementioned series. You’ll be able to control a unique character who carve their own path and unlock valuable achievements along the way.

You can either partake in some riveting side quests, tag along with your buddies online or run through bosses and other players in PvP mode.

In the end, whether you prefer a  strategic RPG like Project QT or a hard-hitting brawler like Dragon Ball FighterZ, you’ll be more than happy to know that there is hardly any shortage of anime games based on your favorite series on Japanese television.