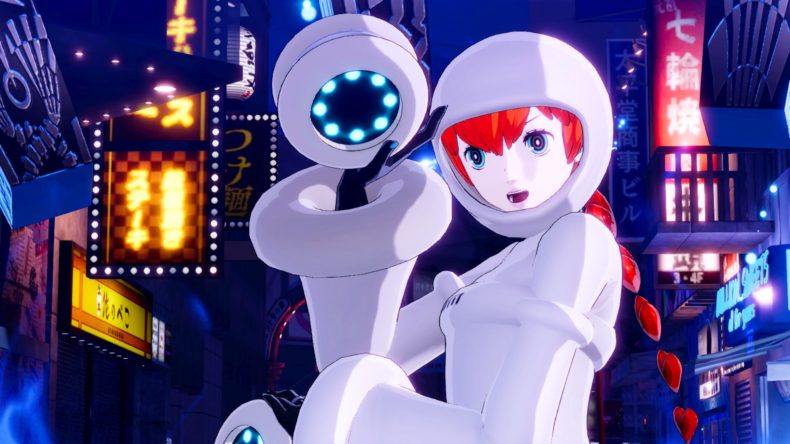 One of the coolest systems in Persona 5 Strikers is Bonds. As you fight and defeat Shadows throughout the Jails, and become closer to your friends in the Phantom Thieves, you’ll upgrade your Bond level. As you do this, you’ll be able to unlock plenty of Bond skills that offer certain bonuses to a whole host of abilities. With so many to choose from, we’ve picked the best ones to unlock and level up, making sure you’re best equipped to deal with anything that gets thrown at you as you travel across Japan. 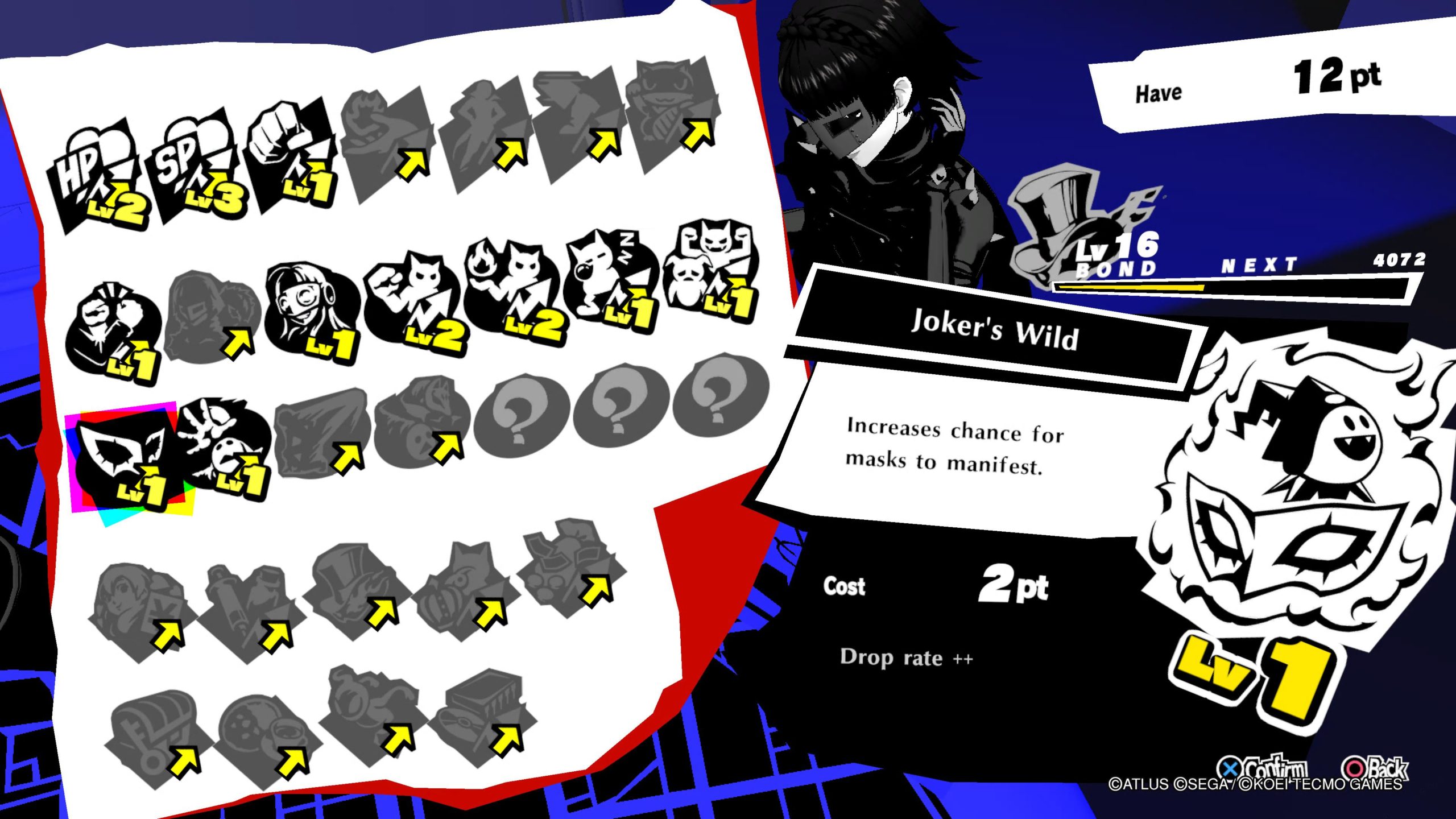 Costing only 2 points to unlock, the Joker’s Wild skill will mean the likelihood of finding new Personas in the Jails rises significantly. With so many enemies being weak to a variety of elemental, physical, and mental attacks, the need to keep your roster of Personas varied is vital. You’ll find that more Mask drops will occur, helping you to collect new Personas to either level up and use in battle, or Fuse with others to create more powerful Personas in the Velvet Room. 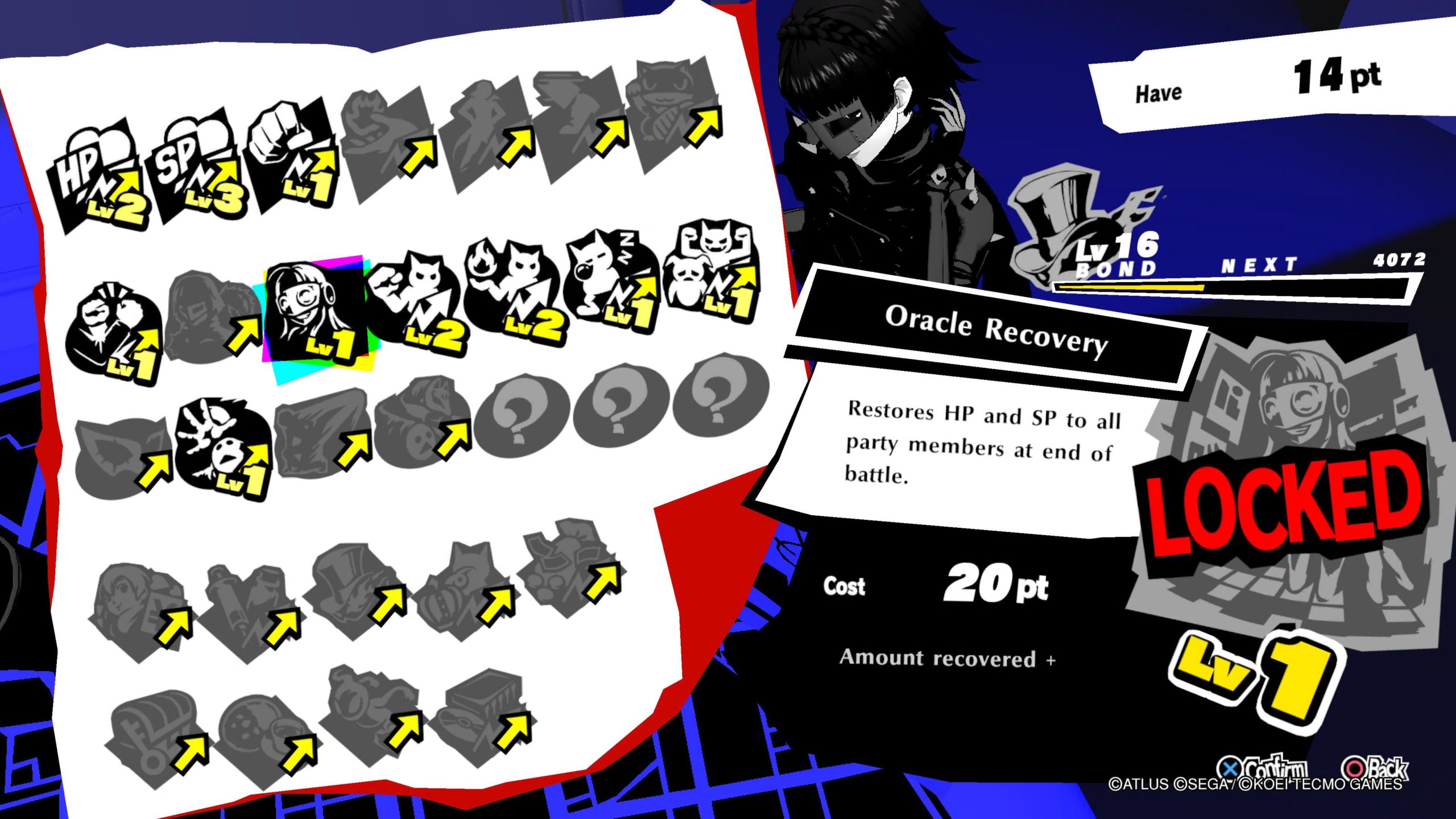 As you progress further through the game, Shadows and Monarchs become much harder to defeat. No matter how powerful your Personas are, what armour you’re wearing, or what Master Arts you’ve unlocked, there’s always a chance you’ll receive plenty of damage in combat. Unlocking Oracle Recovery will replenish both HP and SP at the end of a battle without the need to use consumables. If you’re in an area with a high density of Shadows, this is an excellent way to keep pushing forward without the need to return to the real world to stock up on supplies. 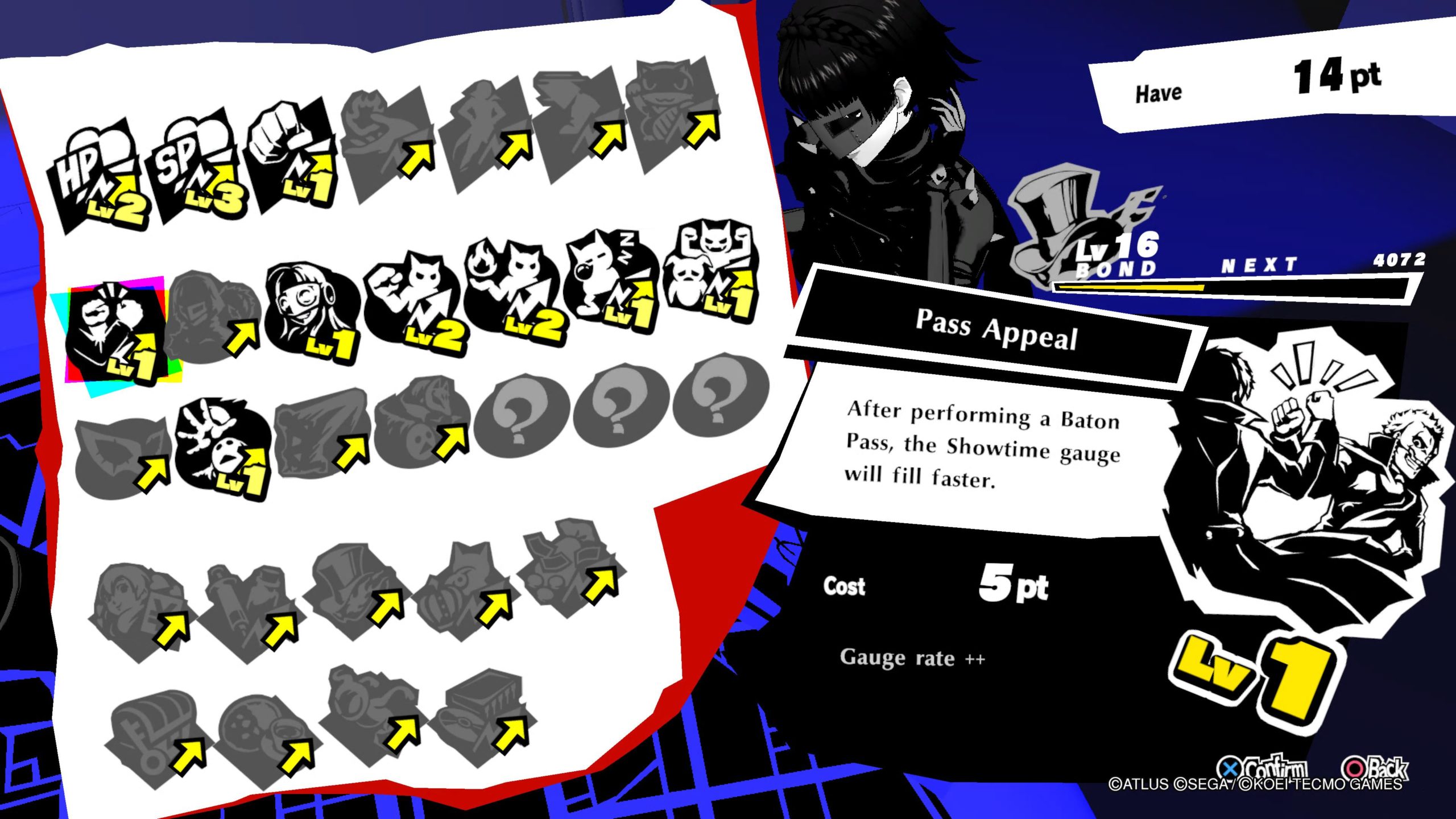 Teamwork is the most important aspect of combat as you’ll need to switch between party members to deal with Shadows effectively. As detailed in our combat guide for Persona 5 Strikers, each member of the Phantom Thieves has something special they can add to a fight. To make this approach even more effective, the Pass Appeal skill will fill the Showtime gauge quicker every time you make a Baton Pass (swap party members). The Showtime attack does a lot of damage, and can be a game changer when facing one of the Jail’s Monarchs, so having the option to fast track to the attack is really important. 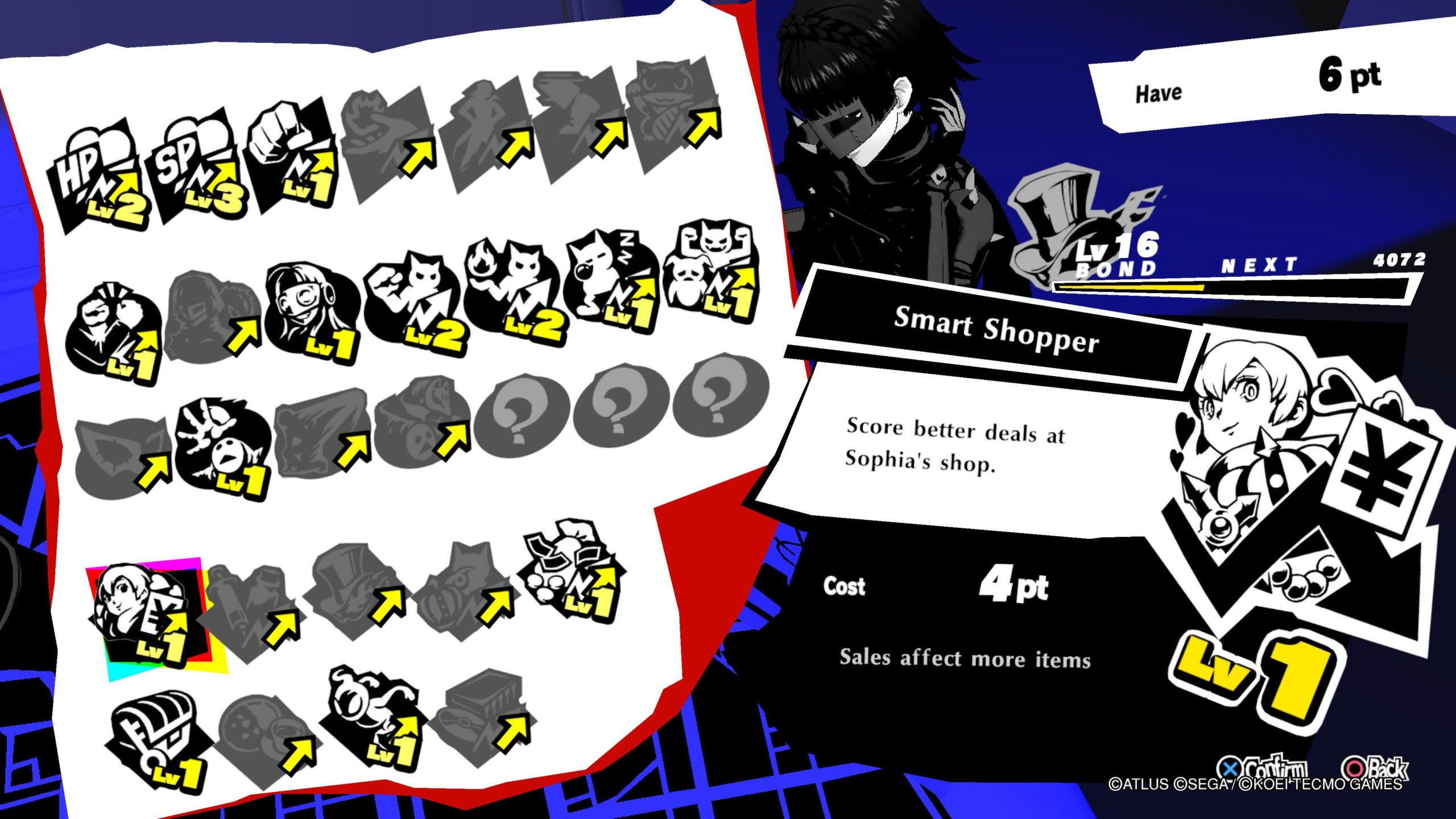 As mentioned in our guide on how to make money, the Smart Shopper Bond provides you with various discounts in Sophia’s shop. Whenever you have a nice amount of Yen built up, the chances of scoring a sweet deal on some new armour or weapons comes at a higher chance with this vital Bond skill unlocked. 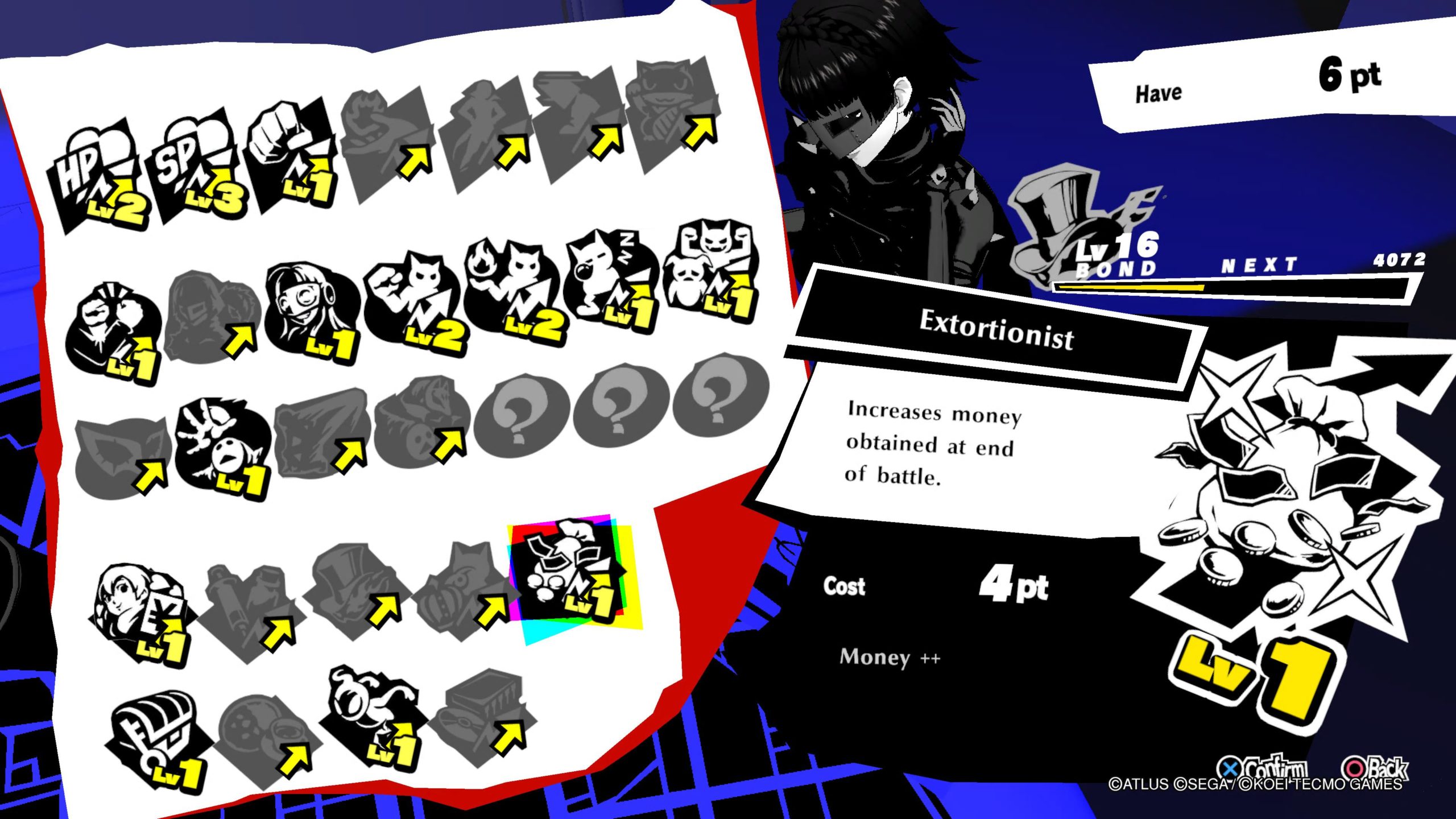 Without plenty of Yen to buy all the supplies you need, it’s pointless browsing shops to pick up new equipment. Money is also important if you’re wanting to level up your Personas in the Velvet Room, so the Extortionist skill will make sure you’re earning the maximum about of Yen after every successful showdown with a Shadow. 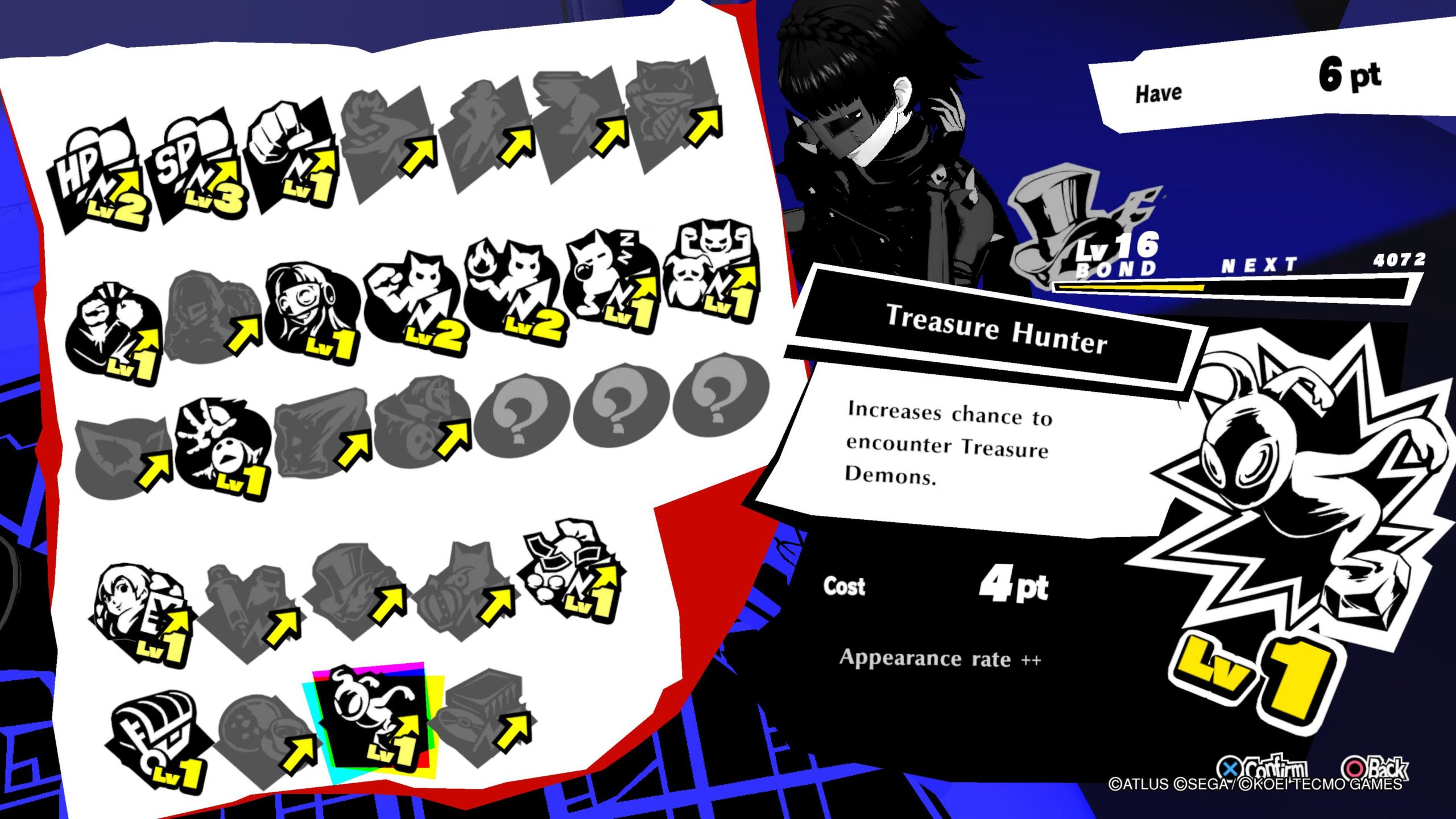 Persona 5 Strikers always finds ways to reward you as you play, but nothing is more satisfying that defeating a Treasure Demon. These Shadows offer a hefty reward once defeated, and unlocking a Bond skill to improve their frequency in Jails is vital. By unlocking the Treasure Hunter skill and focusing on levelling it up, you’ll find that the demons appear a lot more as you explore the various Jails, leading to higher rewards such as new items and plenty of Yen.

Bondmaker – With the the Bondmaker skill unlocked, you’ll level up your Bond gauge faster which in turn allows you to buy more skills or level them up. You’ll find that the more you fight and the more time you spend with your friends, you Bond level will increase rather rapidly, but having this skill just helps to make the process even quicker.

Ambusher – Unlocking the Ambusher skill, every time you ambush an enemy and successfully defeat them, you’ll gain an amount of HP. Whilst not as good as the Oracle Recovery skill, it’s good to find any way you can to keep that HP meter as full as possible.

Video games are cool. Don't let anybody tell you any different.
MORE LIKE THIS
BondGuidePersona 5 Strikers