previous
How To Write an Essay on Video Games in The Best Way?
random
next
How to transfer your Death Stranding save file to Director's Cut
0 comments

by Paid Placement Advertorial on September 23, 2021 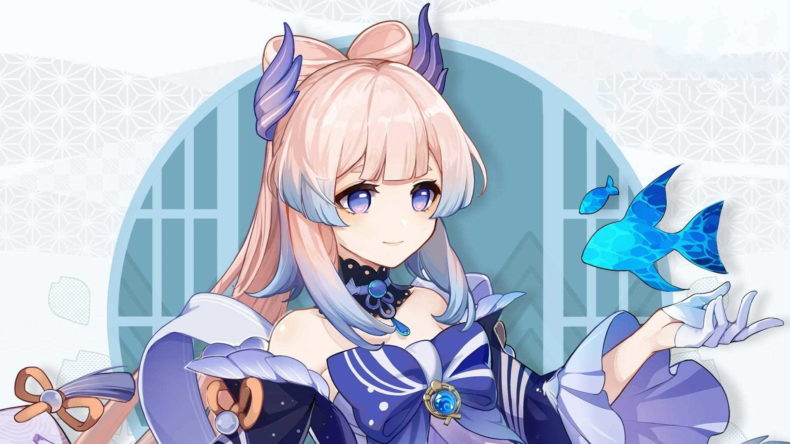 Genshin Impact has recently released their first half of the 2.1 update that introduces Raiden Shogun, Kujou Sara and Watatsumi Island into the mix. The other half sees the release of Sangonomiya Kokomi as part of the continuation of the Archon storyline and as a new playable character.

So, who is she anyway? Why should we pay attention to yet another new character? Well, let’s find out!

Sangonomiya Kokomi is heir to the Sangonomiya line, leader of the resistance on Watatsumi Island. She is also known as the Divine Priestess that inherited the will of the slain god Orobaxi to protect and defend the island. The island was released in the first half of Update 2.1 and Kokomi will follow suit after Raiden Shogun’s banner comes to an end.

Her main weapon is a Catalyst and her Vision/Element is Hydro. Based on her abilities, she seems best suited for a strong Support role. Her banner ‘Drifting Luminescence’ is released on September 21, 2021, and she will be accompanied by Rosaria, Beidou and Xingqiu. 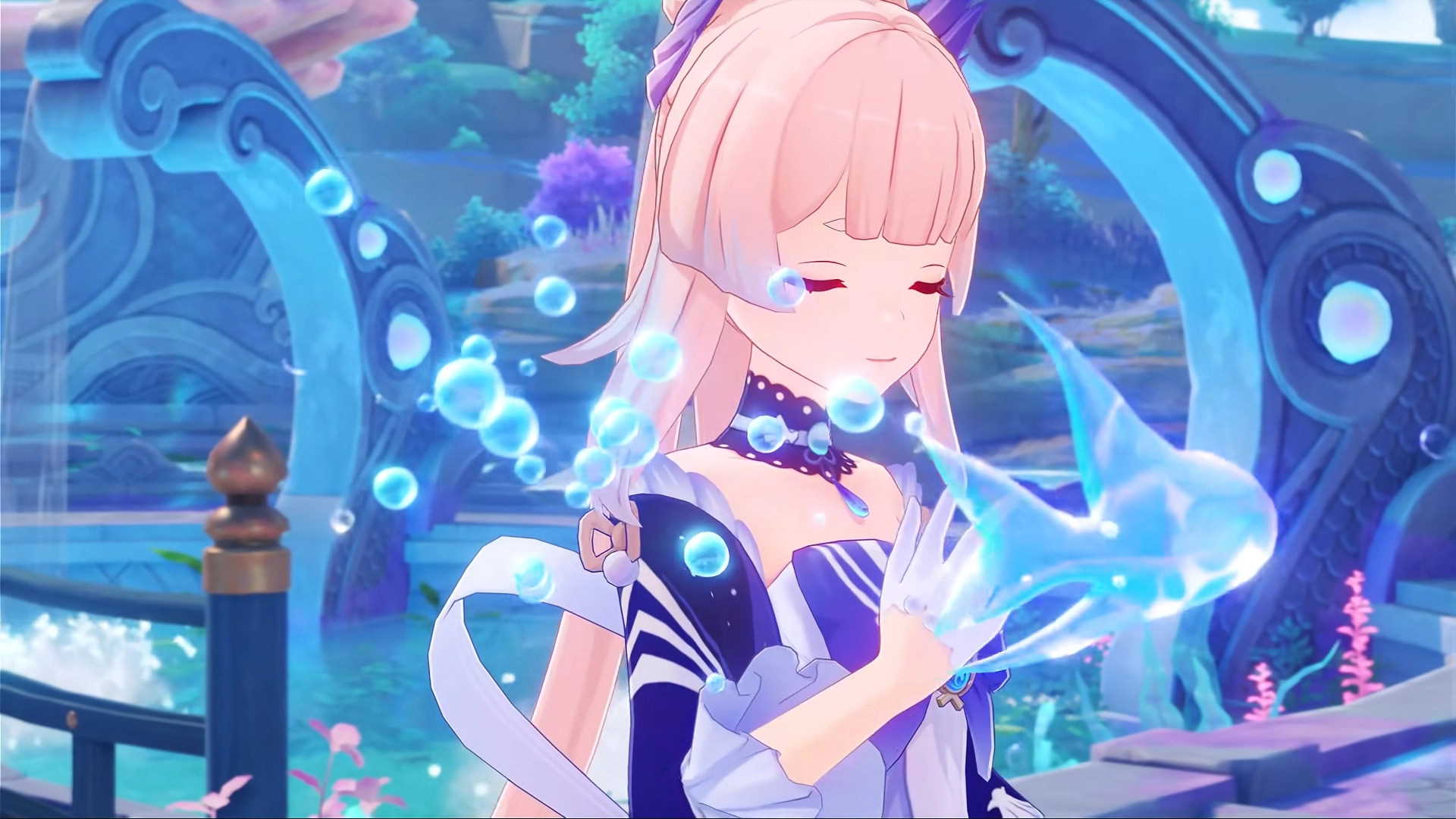 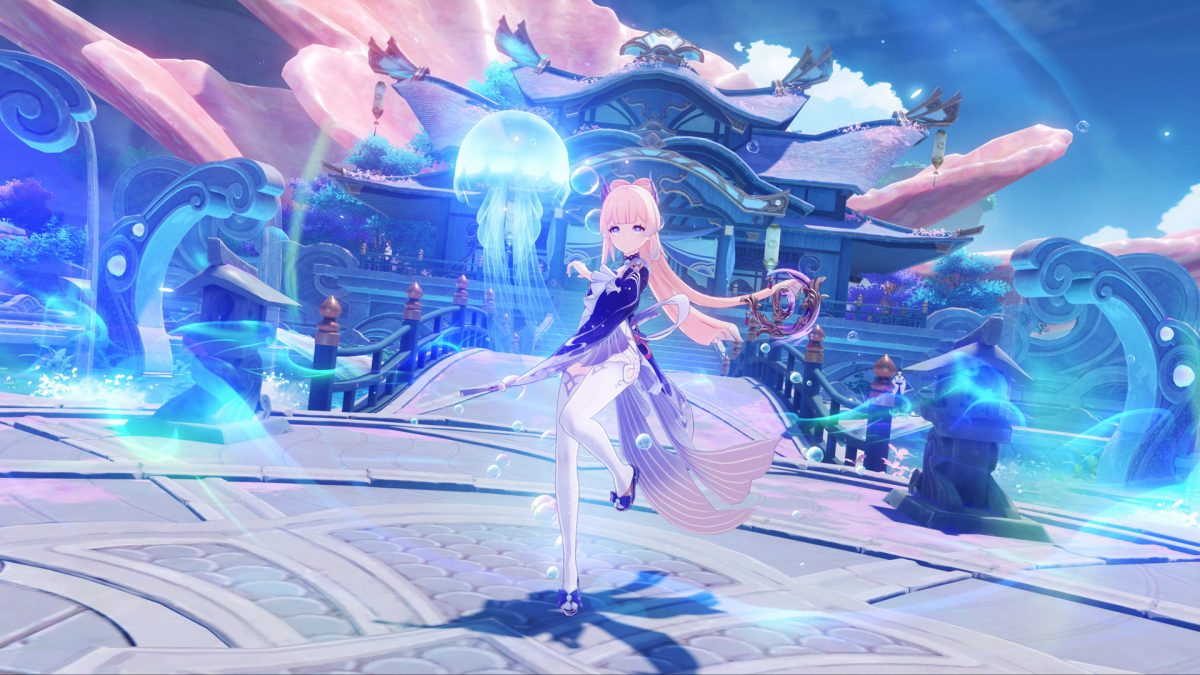 There are six constellations to unlock as noted below:

At Water’s Edge: With the Ceremonial Garment from Nereid’s Ascension, the last normal attack in Kokomi’s combo will unleash a fish that deals 30% of her max HP as Hydro damage.

The Moon, A Ship O’er the Seas: Increases level of Nereid’s Ascension by 3, max upgrade level is 15.

The Moon Overlooks The Waters: With the Ceremonial Garment, Kokomi’s normal attack speed increases by 10%, normal attacks that hit enemies restores 0.8 energy for her. The effect can only occur once every 0.2 seconds.

All Streams Flow To The Sea: Increases the level of Kurage’s Oath by 3, max upgrade level is 15.

Sango Isshin: With the Ceremonial Garment from Nereid’s Ascension, Kokomi gains a 40% Hydro damage bonus for 4 seconds after her normal and charged attacks heals a member with 80% or more HP. 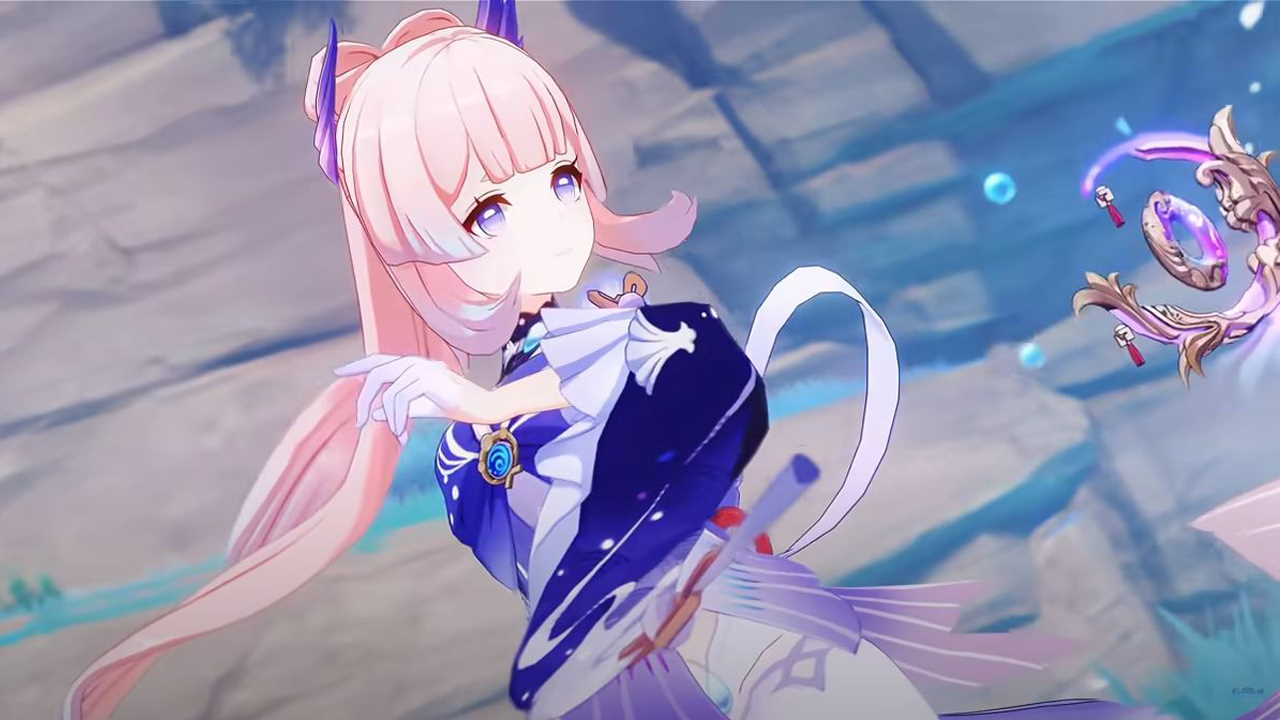 Since she is a healer, she is best placed in a Support role, but you can try placing her in any other role that you think might work. Here’s our recommended support build:

Artifact: Tenacity of the Milileth (four-set)

The best 4-star catalyst for Kokomi is a Prototype Amber as it helps generate four energy every two seconds for six seconds that makes Kokomi regenerate her abilities faster. The catalyst also heals party members for 4% of their health every two seconds.

The four-piece Tenacity of the Milileth effect ties into Kokomi’s elemental skill and health buffs. This artifact set increases the attack of party members by 20% and shield strength by 30% for three seconds.

The best course of action is to activate Kokomi’s elemental skill and switch her out with a character that deals damage as her abilities could still be in effect when she’s out of the field. 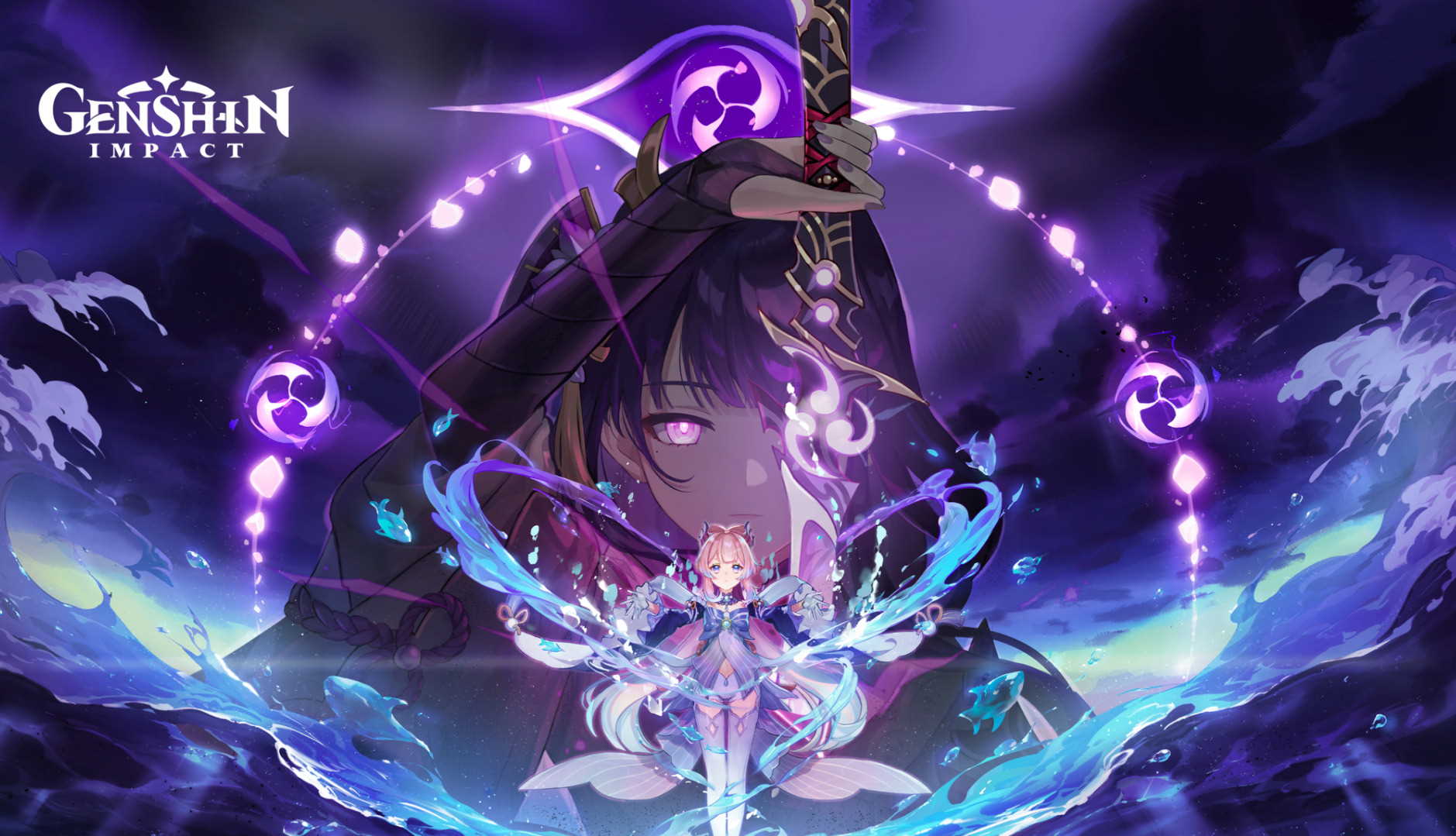 Aside from that, characters like Kazuha as the main DPS could pair well with Kokomi as he could activate swirl elemental reactions as well as deal a large amount of damage on his own. Plus, if you choose to have Raiden Shogun on your team, she pairs well with Kazuha. Their elemental abilities could work together to end enemies faster.

Lastly, with all the energy you will be putting in with these characters, incorporating Kujou Sara helps to replenish and create a ton of energy for everyone to burn through. 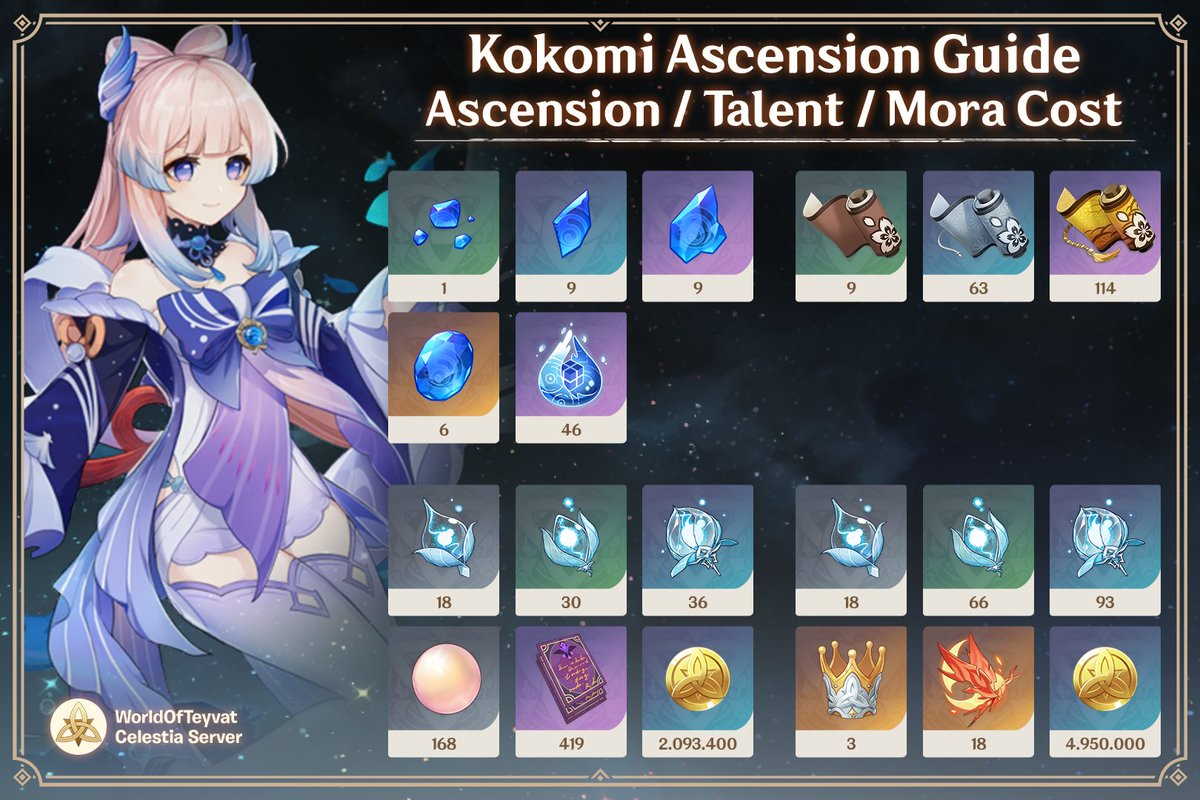 In order to ascend Kokomi to the next level, you’ll need:

Dew of Repudiation and Varunada Lazurite is dropped by Hydro Hypostases and even Oceanids. Sango Pearls can only be found on Watatsumi Island, so if you’ve been running around since the update, you would have some in hand. The Spectral Husk/Heart/Nucleus are dropped by Spectres, a new type of enemy exclusive to the Watatsumi and Seirai Islands.

Teachings of Transcience can be found in the Violet Court domain; Crown of Insight is received as a reward for levelling up the Frostbearing Tree in Dragonspine of the Sacred Sakura in Inazuma. Hellfire Butterfly can only be obtained by defeating the La Signora weekly boss at level 70 and above.

We’re excited about Kokomi’s release to explore her story further and to experience her character! Now, if you’re looking for a trusted place to get your Genesis Crystals, you can directly head over to OffGamers right here. If you’re in need of a good healer, Kokomi is definitely the way to go so make sure to stock up on your Primos!