Floodland is a bleak but immersive settlement sim | Hands-on preview 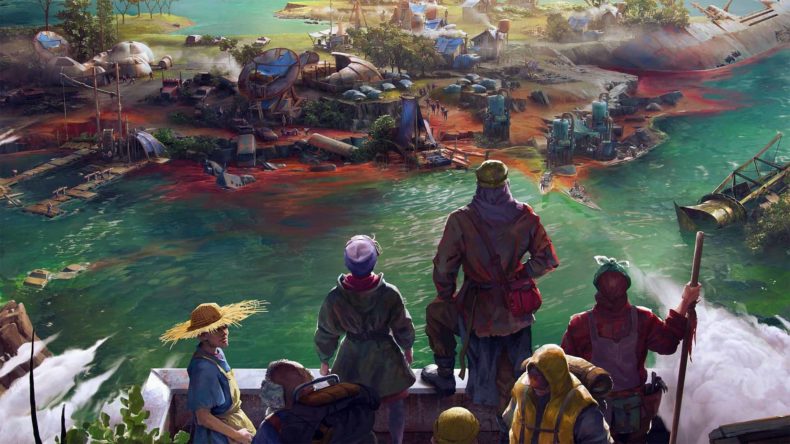 Floodland, from Vile Monarch, has a pretty serious message, and it wastes very little time getting to it. Rather surprisingly from a team who also worked on Oh…Sir! The Insult Simulator, this new game is focused on a pretty grim and harrowing prospect.

Set in a world that has barely survived climate change, Floodland sees you taking control of a fledgling settlement on one of the scattered islands that make up all that remains of the world. You’ll need to build, guide, and govern your settlers, or clan, through some incredibly harsh conditions. For context, my first few attempts ended in disaster within the first few objectives. 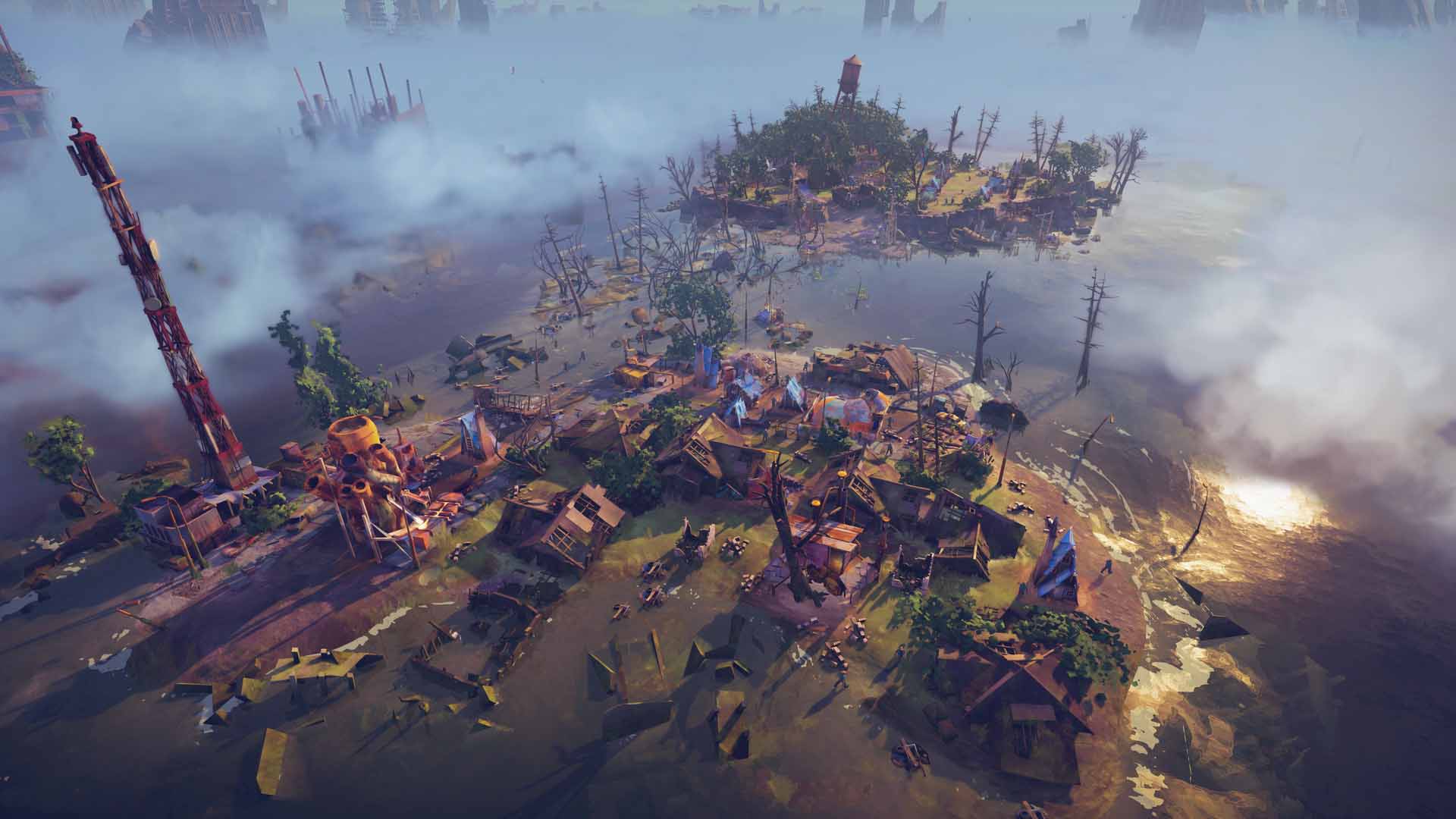 You choose a clan from a small selection with differing ideologies. How you choose to lead, distribute labour, settle disputes and, where necessary, punish wrongdoings all relates to the type of clan you choose, and if you don’t rule fairly there will be dissent, uprisings, even fatalities.

Initially you’ll need to salvage rubbish, wood, herbs, and scavenge berries for food. After a while the focus shifts to building, installing storage areas, water purifiers, and cook tents, as well as living spaces for your people. The art style is beautifully sombre, purposefully keeping you at a distance to increase the feeling that while these you’re in control of these people, you’re not really one of them. You must make the hard choices to ensure the safety of all.

There’s something weirdly compelling about surviving through scavenging. You are literally living off the land, scraping up anything and everything of use. When you unlock the research trees, you realise just how far you have to go to make the settlement work. Which was around the time my initial group had their first death. One of my settlers died from eating poisoned food, which soon affected the populace to the point that eighteen of the twenty remaining also died, and it was game over. 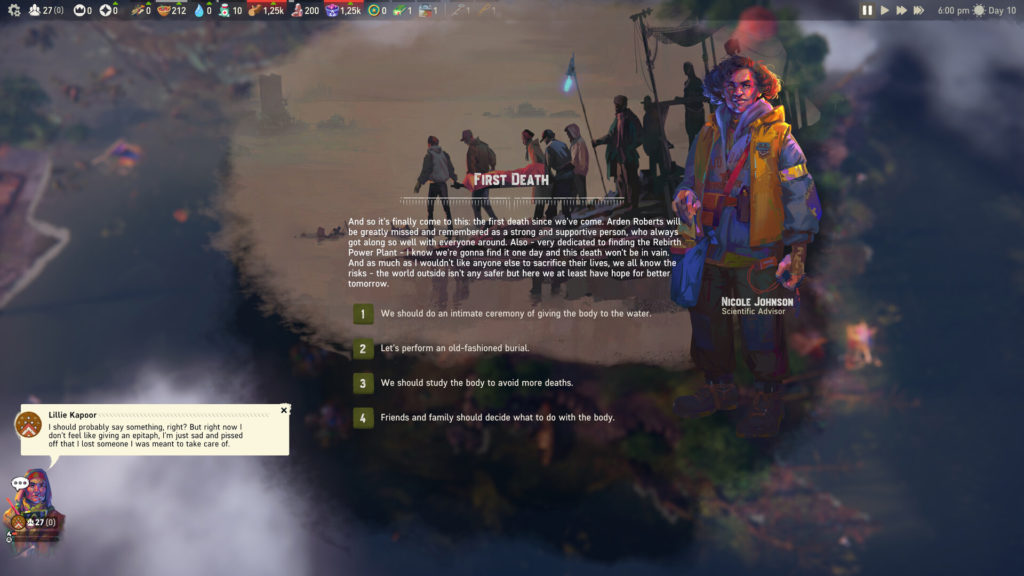 My next settlement went better. This time I managed to install a sorting hut to increase the rubbish gathering, and convinced a group of sheltering survivors to join me. I had a system of gathering, crafting and working, with my settlers returning to their beds every night until sunrise, when they would get straight back at it. They approached me with issues I had to solve. As an example, two guys had an argument about the way I was distributing labour which led to wasted resources. One was supporting me, the other criticising, but their combined actions led to the clan losing out. Would I side with one or the other, or punish or forgive both?

As I made the decision I could feel all eyes upon me, and my choices didn’t please everyone. Likewise, when we eventually had a death, I chose a standard burial which almost led to a revolt among the remaining settlers. Again, we weathered food poisoning and harsh conditions, but I couldn’t build fast enough to sustain my dwindling population. Once more, everyone died and I was forced to start again. 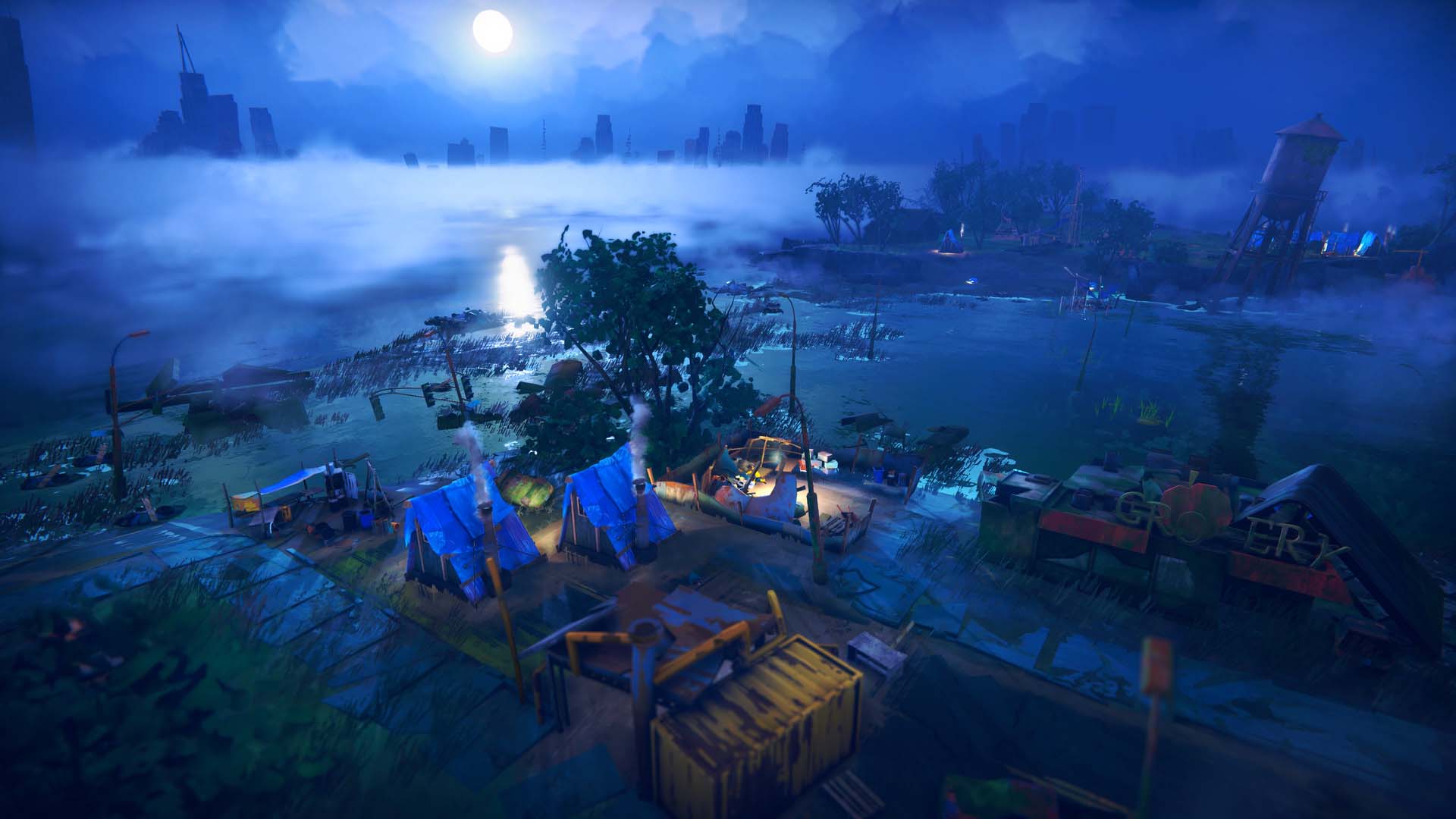 I never found Floodland to be mean-spirited or overly punishing though. In fact, it seems like a game you’re supposed to fail at a few times before you start to get it right. You will make the wrong decision, enact choices that cost resources, time, or even lives. But there are also triumphs to be had, when you welcome new survivors, unlock a new building type or way of refining your food and water, or simply make it through a rough patch that saw an earlier attempt fail.

Floodland could be a little less pernickety with its controls (you can’t order individuals around, for instance), but it certainly will make you think and feel. It may not be the most joyful game out there, but the message it conveys is clear. How far into bleak and punishing it strays in the full game remains to be seen, but I’m looking forward to facing the challenges it presents.

Senior Content Editor Mick has been playing games for over 30 years and writing about them for around 12. After drifting from site to site for a while, settling briefly at the now-defunct Made2Game and freelancing for the gone-but-not-forgotten NintendoGamer Magazine, he came at last to rest at Godisageek. Mick has been a reviewer, staff writer and content editor here for some time, while also moonlighting a little for Red Bull Games. He has 4 kids, has written 2 novels, and sometimes even manages to pay a bill or two. You'll usually find him defending the galaxy in Destiny 2, battling evil in Diablo 3, or lurking in the background on Twitter. Find him there @Jedi_Beats_Tank, or on XBL (JediWaster247), PSN (Jedi_Waster) or Nintendo (JediWaster).
MORE LIKE THIS
FloodlandStrategyvile monarch