previous
Warhammer 40K: Darktide is a violent delight | Hands-on preview
random
next
Trails to Azure is releasing next March
0 comments 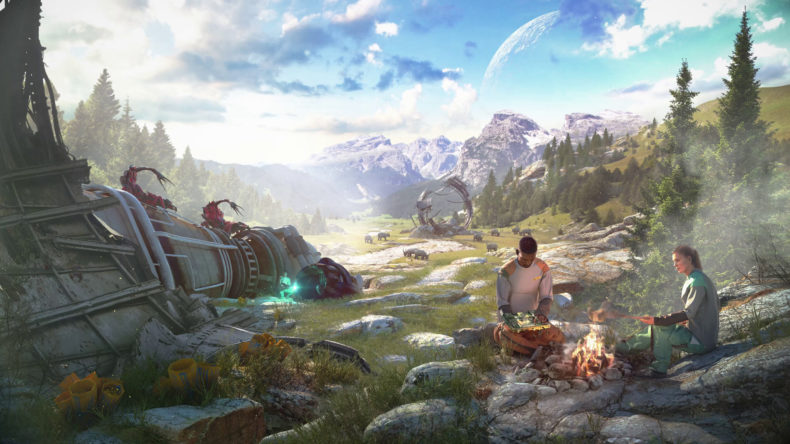 If you’ve ever played RimWorld, you might raise a few eyebrows at Stranded: Alien Dawn, a new early access colony sim from Haemimont Games. While it sets its stall out early as more realistic-looking affair, there’s simply no denying the influence. Almost every mechanic is lifted wholesale from the addictive, top-down RimWorld, from the randomly generated survivors to the way you “draft” them for combat and rescue expeditions.

Though, in Stranded you’re not selecting colonists as part of some expansion drive; here, your survivors are just that, a fortunate handful who staggered from the burning wreckage of their spaceship to find themselves adrift on a hostile alien world. Luckily, the one I found my survivors on was quite a beautiful world, and though the planet itself isn’t procedural, where you crash is. 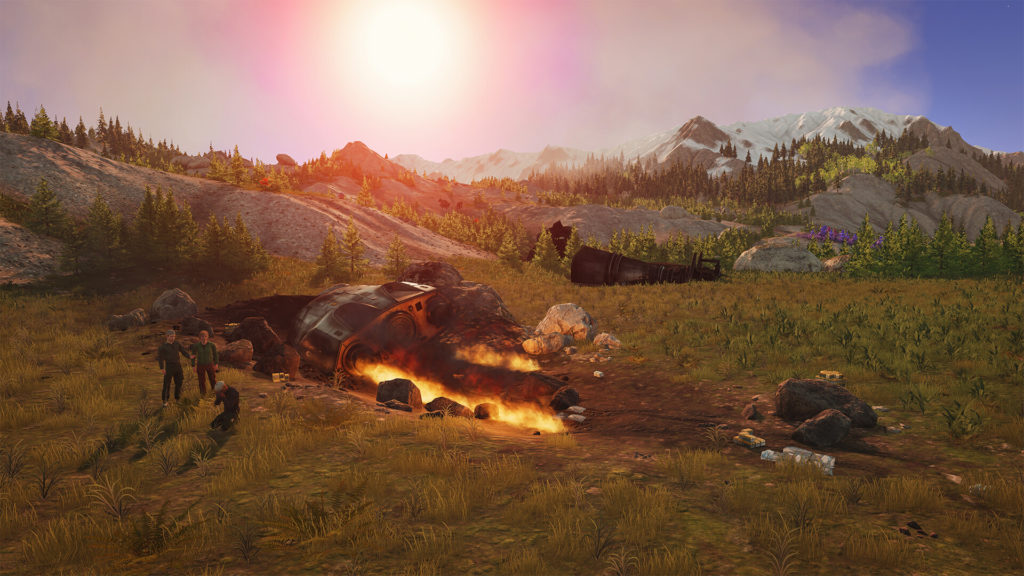 Having a more realistic aesthetic certainly helps Alien Dawn pull you in. While I really liked RimWorld and the way its unlikely dramas unfolded, the fact that your survivors here look, move and act like real people helps form an attachment to them. Which, consequently, makes it harder when they die. And, oh boy, die they will.

The planet is, as I said, hostile. Even eating the wrong thing can kill you, and that’s before you factor in environmental hazards and deadly fauna. You may start off fighting a few giant beetles with a makeshift spear, but before long you’ll craft armour, scavenge energy weapons from the wreck of your ship, and face off against huge alien monstrosities.

Another nod towards RimWorld is the way your colonists progress. No one is a Jack or Jill of all trades. Some survivors can’t or won’t fight, some are expert cooks, others can’t tell a poisonous mushroom from a rock on the ground. While you don’t have as much say over these elements, the way you’re simply forced to make do with what you have is surprisingly compelling. 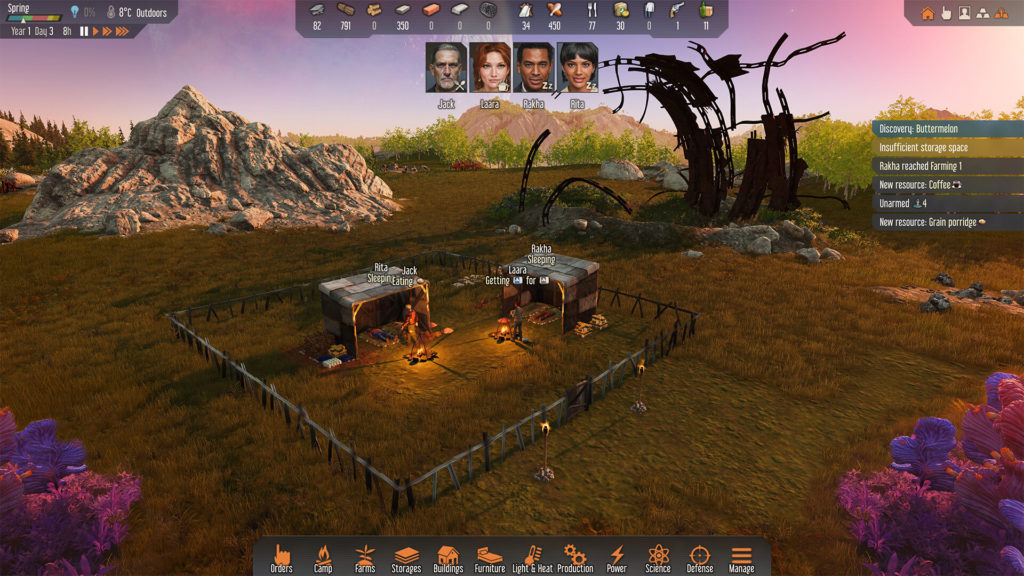 There are no quick fixes for anything. If you’re wounded in a fight you’ll need someone to tend your wounds. If the only person with medical knowledge is wounded too, you’re probably both going to die. And in that case, the third survivor faces a very short future alone. After building makeshift shelters and defensive walls, you’ll need to research new abilities, crafting projects, and useful items. You can send researchers out to observe wildlife and plants, though beware not to stray too far unarmed.

Periodically the wildlife will become interested in what you’re doing and come in for a closer look. Or else it might just attack you en masse and force you to defend your meagre supplies. You can research traps, defensive turrets, and better weapons, while also developing the skills needed to turn hostile lifeforms into tasty soups and comfy slippers. 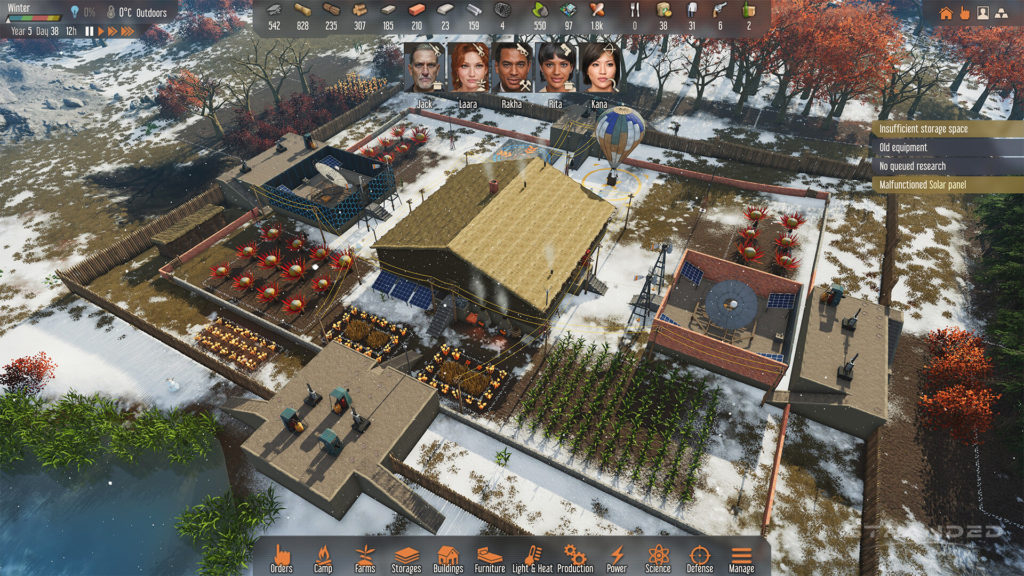 That said, the biggest threat may end up coming from within. Survivors have distinct, evolving personalities and sometimes they’ll clash. Occasionally, that may cause real separation between them, and lead to conflict or even violence. You can’t control their actions directly unless you’re in combat, but you will have to set their daily schedules and allow time for relaxation and sleep. Balancing their needs is essential for a smooth running colony, and as you expand your camp and broaden your horizons, you’ll need to keep as many happy as you can.

Stranded: Alien Dawn is more than just a 3D homage to RimWorld, but only just if I’m totally honest. Having only recently played the latter, so much of Alien Dawn felt familiar, though with its own level of strategic depth. It’s a little less concerned with randomised events and runaway AI, and more concerned with building and maintaining a place to live. Overall, there’s something very grounded about the whole experience and, while you’re fighting off giant alien scorpions on a distant planet, that’s probably what you need.

Stranded: Alien Dawn is currently in early access on Steam.

Senior Content Editor Mick has been playing games for over 30 years and writing about them for around 12. After drifting from site to site for a while, settling briefly at the now-defunct Made2Game and freelancing for the gone-but-not-forgotten NintendoGamer Magazine, he came at last to rest at Godisageek. Mick has been a reviewer, staff writer and content editor here for some time, while also moonlighting a little for Red Bull Games. He has 4 kids, has written 2 novels, and sometimes even manages to pay a bill or two. You'll usually find him defending the galaxy in Destiny 2, battling evil in Diablo 3, or lurking in the background on Twitter. Find him there @Jedi_Beats_Tank, or on XBL (JediWaster247), PSN (Jedi_Waster) or Nintendo (JediWaster).
MORE LIKE THIS
Frontier DevelopmentsHaemimont GamesStranded: Alien DawnStrategy