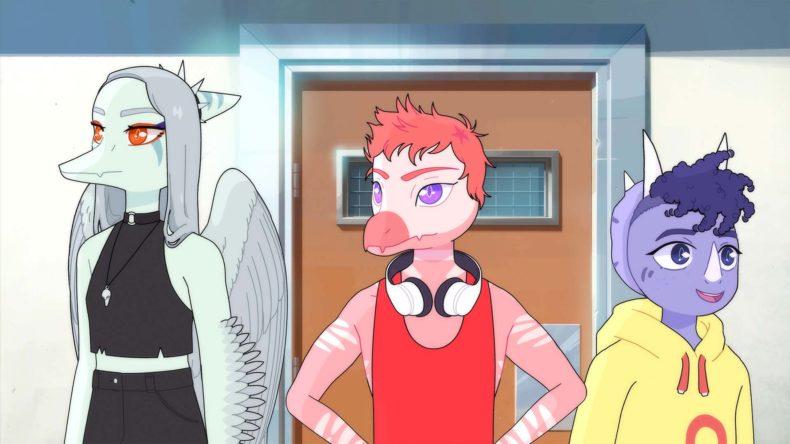 Previously thought to be coming at some point in 2022, developer KO_OP released a new trailer for Goodbye Volcano High announcing a Summer 2023 release date.

It was announced back in June 2020 at the “Future of Gaming” showcase for PlayStation 5, and was originally slated to be released in 2021, but the new trailer clearly says “Summer 2023”, now.

The trailer doesn’t give a lot away really, showing a lot of dialogue and a bit of the visuals in action, something that looks like a rhythm game (maybe) and some dialogue choices. The YouTube description is pretty vague, too, saying:

Goodbye Volcano High is a story-driven, choice-based cinematic adventure game about personal growth, acceptance, and the power of community. What will you do at the end of an era?

Just Fang’s luck: they finally figure out what they want out of life, and now the world’s about to explode.

Ok. So the world’s ending—do you tell your crush your feelings? Fix your messed-up family dynamic? Write the best song ever ever ever?? Try to do it all?

Goodbye Volcano High: a hybrid cinematic narrative/rhythm game/coming of age/interactive movie experience. Call it whatever you want, just wishlist it!

Comments are asking why a “visual novel” is taking so long, but the game is fully voice acted, starring Lachlan Watson (The Chilling Adventures of Sabrina) and features hand-drawn art and animations, with the aim to make it “like a playable cartoon”. It also sounds like it touches on some story content that needs to be done properly, as it “contains mature representations of queer teen life, strong language, mentions of drug and alcohol use, death, and sexuality”.

Regardless, the new release date is Summer 2023, when it’ll be coming to PC (Steam) and PlayStation formats.