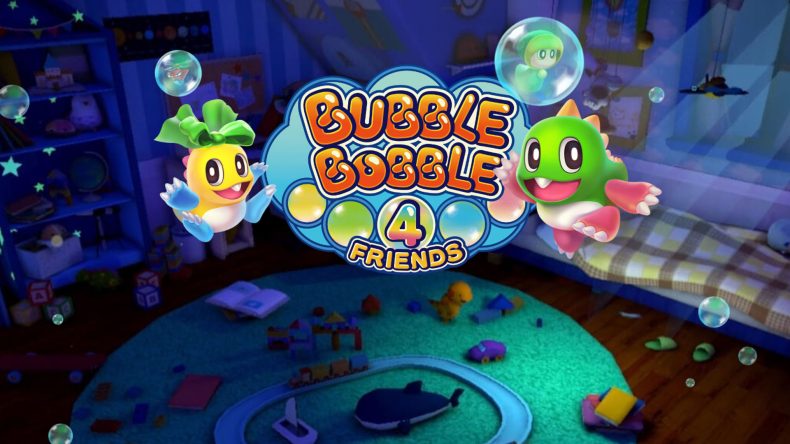 Bubble Bobble is one of those legendary titles that conjures up memories of a simpler time, one run by cute dinosaurs who had clearly swallowed too much bubble mixture. It holds a dear place in the hearts of many who played it back in the day. Over three decades have passed, and the original has graced consoles numerous times since. There have also been sequels, and this latest offering by Taito, Bubble Bobble 4 Friends, is trying to rekindle that magic for a new generation.

Out exclusively for Nintendo Switch, this iteration offers, unsurprisingly, 4-player bubble action. So now up to four of you can cooperatively bubble and squish enemies as a dino team. There are 50 new levels to try, split up into groups of ten. The last level in each sees you face off against a boss enemy, requiring a large amount of bubbling up before you can finally pop them for good. As with the original, you rack up more points for popping multiple bubbles at once, adding the familiar strategic element. As you progress through the stages, you also unlock different special bubbles to use. These range from bubbles that fly farther to others that have a more devastating punch when popped. And sadly, that’s kind of it really. Sure there’s also the original Bubble Bobble to play should you wish, in all its 1980s glory. However, if anything it just goes to show what over 30 years of progress has given us. Bubble Bobble 4 Friends feels incredibly familiar, which in one sense is endearing, but at the same time also falls a little flat. All the levels can be whizzed through within an hour of playtime. Besides bettering your high scores, there’s very little replayability on offer here.

So I’m wondering who Bubble Bobble 4 Friends is really for? Those looking for a blast of the original have had many chances to purchase it on a console. It was even part of the Classic NES Mini. Is it going after the high-score chasers instead maybe? Clearer airflow patterns on-screen help you strategise as you map out where bubbles will go. Clever planning will help you nail those combo pops and get the best fruit, worth more points. But there’s no leaderboard, no bragging rights like the old arcades, so for want of a better phrase, you’re just playing with yourself. And nailing a three-star score rating and unlocking a music track to play will only push people so far. There are, of course, those looking for multiplayer action. But we’ve been here before also, with Bubble Bobble Plus / Neo offering 4-player support on the Wii and Xbox. Also, in Bubble Bobble 4 Friends, it’s literally just co-op opportunities across the new 50 stages the game presents you with. Although this doubles up to 100, after you unlock the harder difficulty setting. Sadly, there are no competitive minigames or any other additional content for multiple players to enjoy. This means the multiplayer is cut decidedly short and loses its appeal before long.

To be fair, it’s not a terrible game. The controls feel relatively tight, and you can quickly get a feel for the weightiness of your jumping. Balancing on bubbles feels like it should, and the enemy hitboxes feel fair and appropriate. The squishing of bubbles with your spines can sometimes feel a little imprecise, but this has always been the case throughout the series. The music is also fairly enjoyable with upbeat tunes accompanying the bubble carnage on-screen. And the bosses do represent a decent step-up in difficulty, particularly in the later levels. However, it’s all over far too quickly, and it feels like there’s little here to draw you in over previous titles. All things considered, a younger audience will get the most out of it. They’ll appreciate the simple gameplay, bright colours, and under-developed graphical style. They may even make use of the invincibility mode, should things get a little tough towards the end. The most important factor though, is that they won’t have had an opportunity to play this series before. Experiencing Bubble Bobble for the first time is still exciting, even if this version doesn’t capture the magic of the original in the same way. Veterans of the series though will be left somewhat underwhelmed by Bubble Bobble 4 Friends. It just feels like a scaled-down package with little inspiration.

Yes, Bubble Bobble is back, and for some people, a new group of levels with familiar gameplay will be enough. Those fans will absolutely lap Bubble Bobble 4 Friends up. The opportunity to do so with young children adds an undeniable draw for young families too. However, the people this is truly aimed at, those who remember the original, will likely feel a bit let down. The nostalgia of the original may still hold sway in their hearts, but this reimagining over thirty years on just feels too short and lacking any new ideas to justify a solid recommendation.

Bubble Bobble 4 Friends will appeal to younger audiences. Older players will have to have very rose-tinted specs to appreciate this over previous versions.