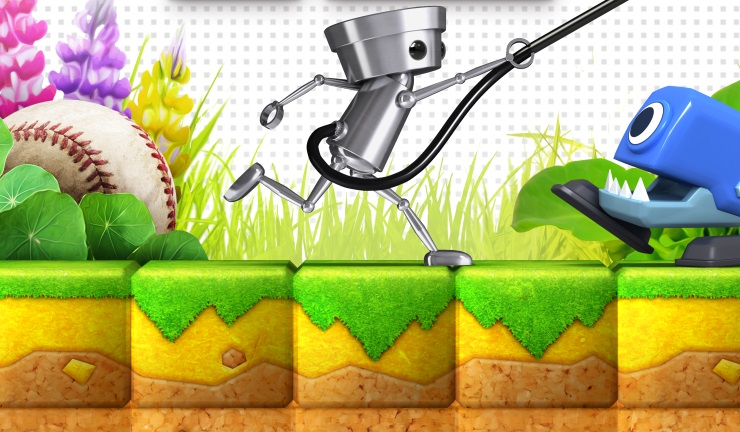 Along with Luigi’s Mansion, the original incarnation of Chibi-Robo was quite simply one of the most charming, innovative and downright enjoyable experiences you could find on one of those cute ickle Gamecube discs. The notion of a dutiful, helpful robot with a heart of gold is always a winner, particularly when they curry favour with their human overlords by tidying up around the house. When Nintendo revisited the green half of our beloved plumbing duo, we got more of the same exceptional, atmospheric ghost-busting fare. The same cannot be said of the shiny little robot, whose role has altered significantly here when compared to his cleaning exploits a decade ago.

Zip Lash has far more in common with the likes of Yoshi’s Island or Umihara Kawase than it does its quirky forebear, being a fairly straightforward 2D platform affair that has just enough bells and whistles to separate it from the crowd. This time around, Chibi is party to an alien invasion, with critters descending on Earth to gobble up the precious natural resources. It is somewhat of a disappointment that the kitsch 1960s setting of old has been entirely abandoned, not to mention the avoidance of what we were led to believe was the robot’s reason to exist: ultra-cute servitude. Instead of scrubbing, picking up litter, or conversing with toys, we see a more aggressive all-action robot this time, who employs his plug and power cord as an innovative weapon-cum-gadget to traverse the landscape and take down the aliens. In other words, he has become a significantly less charismatic, more generic platforming avatar. The plug is the star of the show. It can be used to whip enemies, grapple, pull, and of course execute the time-honoured cross-chasm swing. In time you can collect power-ups which lengthen the handy appendage to allow access to new areas and secrets. Starting out as a bog standard length of flex, eventually you end up with a pretty exciting mechanic on your hands. In the same way you would line up a trick shot in a game of pool, the plug can be bounced off walls in splendid ricochet fashion to reach new areas, smash blocks or take out alien scum. Holding down the button will cause our automaton friend to swing the plug around his head like a lasso, charging it up to initiate a lengthier, more powerful strike.

The whip-like device is even used to control and cling onto the selection of diverting vehicles that appear along the way. A natty water-skiing section where Chibi grips onto a speeding jetski and has to negotiate his way through a series of ramp jumps is terrific fun, as is the introduction of a scooter which Chibi catapults himself around on. While the game is naturally quite mildly paced, it speeds up significantly during these segments. At other times you will find yourself taking a reasonably cerebral approach to each stage to find all of the hidden collectables, or to figure out the best way to take on the excellently designed boss encounters.

An amiibo is available as part of the package, and can be used during the game to trigger a Super Chibi Robo power-up – a state that Chibi could attain in the original game by collecting Happy Points and carrying out his tasks efficiently. At time of writing I was unable to put these features to the test. If we know one thing it is that Nintendo very rarely make a bad platformer, and this is no exception. It is a colourful, bright, fun experience – make no mistake there. But by their own admission the developers intend this to be an attempt to drag the beautifully designed robot into the present day consciousness, the same way that Intelligent Systems made a niche RTS franchise the hottest handheld game on the planet in 2013, or Retro Studios made Samus a relevant concern after being out of the loop for such a long time. Ten years on, even with the aesthetically wonderful amiibo that can be purchased with this game, it’s hard to see how the titular Chibi is suddenly going to become a wildly popular player in the Nintendo universe based upon his exploits here.

Zip Lash decides to avoid the warm, oddball, Toy Story-esque feel of the original, removing its emotional core and the reason many of us gamers who were lucky enough to play the original fell in love with it in the process. The cynic in me feels that this is partially just an exercise in churning out another amiibo that will resonate with retro fans of the Citrusoft creation. Some creative use of his plug cord aside, is there really any other reason why 2K15’s Nintendo gaming demographic would choose this over a Mario Maker, Yoshi or Kirby?

Chibi Robo is back!
Nice physics based platforming.
Bright and cheerful.

Not in keeping with the soul of the franchise.
Character has become generic.
Doesn't feel relevant.

Ten years on, even with the aesthetically wonderful amiibo that can be purchased with this game, it's hard to see how the titular Chibi is suddenly going to become a wildly popular player in the Nintendo universe based upon his exploits here.