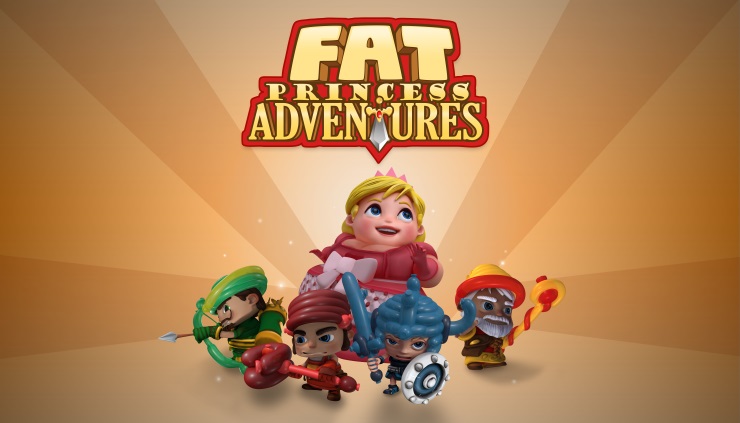 I will admit to missing out on the original Fat Princess back in 2009. The real-time action strategy game with an amusing turn on the classic capture the flag mode was, by all accounts, an under-rated classic. With that in mind I was very much looking forward to trying out Fat Princess Adventures. However, a spiritual sequel this is not, and rather than the tug-of-war of the various multiplayer modes, Adventures opts for a Gauntlet-style hack and slack adventure game, playable on your own or in co-op with three other players. The story is ranged over seven chapters, and the focus is very much on loot with opportunities to upgrade your favourite pieces at various blacksmiths dotted around the maps.

The story is sketchily drawn: the Bitter Queen is out to steal the titular fat princess (or actually, in this case both the red and blue princesses), and it’s your job as a mercenary to find them rescue them, fighting your way through hordes of enemies that range from spiders, to rotten cake with the culmination of a three part boss battle towards the end of each area.

Boss battles provide an opportunity for more interesting loot, but sadly they are a little dull. Each one follows the same pattern: throw lots of enemies at you, dodge the power attacks, then focus all energy on the boss. Each one does require a bit of strategy though, for example: damage can only be achieved whilst using your “Awesome Sauce” meter, or you need to trap the boss before it can be damaged, but they are simplistic and don’t offer much more in terms of challenge to enemies you encounter on the way. Combat is limited to four character classes, with two focused on ranged attacks (a Mage and an Archer), and another two focused on close quarters (a Warrior and an Engineer). All are fairly standard with just enough difference between each to make them worth trying out. However, with only two attack moves, one normal and one hard, the game play essentially boils down to a lot of button mashing. Health is restored by eating cake that enemies periodically drop, and scoffing too much will transform your character into an obese ham-fisted thug for a short while. Killing enemies will also fill up your “Awesome Sauce” meter which you can trigger when full making your attacks far more powerful.

Checkpoints are littered frequently throughout the levels and you can change your class at any one of these checkpoints allowing you to mix up the game play just a little. In terms of balance, all four seem reasonably well complemented when playing in co-op, but when playing solo I found that the melee characters seemed to have the upper hand with the ranged characters swiftly getting overwhelmed by swarms of enemies.

The co-operative works very well, and players can join in or leave at any time. With the ability to change class at any checkpoint there is always plenty of opportunity to switch things up a little bit and try something different, with the loot shared between co-op partners, so there is no worry about being placed in a game with a loot hoover who takes all the goodies for themselves. Once the campaign is finished, there is a Grindhouse mode which allows you to replay the levels again with certain modifiers and challenges placed on it. It adds a certain amount of replayability to what is essentially a fairly mindless and repetitive game.

It looks quite lovely, though, with pretty, colourful arenas to smash things in. The dialogue is occasionally amusing with almost constant narration from the sardonic commentator. Hearing him call out “REKT” in his upper class accent when my character succumbed to a swarm of spiders did make me snort just a little.

There is nothing remotely new or overly interesting in Fat Princess Adventures, it does what it does well, and there is a certain mindless fun in dropping in to the campaign at any point, picking your character, and wandering out to smash through enemies, but it does lack a bit of substance. The dialogue is well done (and on occasion quite funny), but even that is a bit limited and after an hour or so it starts to loop around again and becomes repetitive. The co-op element does lift Fat Princess Adventures to something worth spending time with, and there is the Grindhouse mode to challenge players who enjoy the game play. Loot is plentiful, and there is a draw to playing on to see if you can find something interesting, so for that it is worth some time if you are looking for a game to switch off and power through for an hour or two every now and again.

Fat Princess is a fun, well made, but ultimately shallow four-player hack and slash with a cutesy aesthetic and amusing writing.