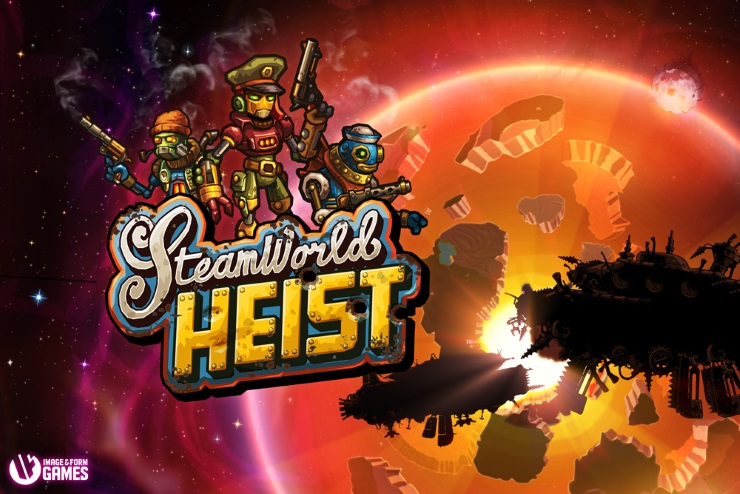 The best games always have some sort of standout mechanic; the feature that makes a game irresistible to pick up, and so moreish that you don’t want to put it down. In SteamWorld Heist, it’s something as simple as aiming – so important to pretty much all games that involve ranged weapons, but not something you would usually expect to be the focus in a turn-based strategy game.

Yet, it is the ricochet-centric gunplay that absolutely makes this game so incredibly fun. In this side-on battlefield of outer space hunks of junk, your ragtag bunch of automatons do everything by turns, whether it’s moving, firing, or using an item; even sacrificing the ability to do the latter two in return for moving further distances. At heart, this is simplistic turn-based strategy, done in the best possible way. When it comes to attacking, there’s a clear focus on trying to get headshots for a chance of a critical hit, and even when you don’t think you have a straight path to make a shot, your inherent ability to ricochet shots off walls and objects makes for some incredible trick shots. Early on you’ll have access to guns with laser sights that make these feats of accuracy that little bit easier, but once you start to find or purchase some of the better weapons, then the training wheels come off and your judgement comes into play, making those insane shots become an even greater feat, and a more satisfying achievement.

There are a wide variety of weapons and other items to find, and each member of your team can equip a weapon, a hat, and two utility items; all of which can be picked up when doing missions or purchased at shops found on the map. You’ll meet several potential team members throughout the game, and not only do they have their own unique identity, but they also have their own skillsets and abilities that are earned by leveling up. Of course, you won’t be able to take all of your team into battle at once, so you’ll certainly want to rotate your crew to ensure everyone levels up at the same pace. Finding out how to use each team member becomes a game in itself, as you learn how to get the very best out of different combinations of crew and weapons.

It helps that the setting is equal parts cool and quirky, with elements of the Old West, mixed with SteamPunk and 30s-sci-fi making for a world and cast of characters that you’ll find hard not to like. Think Joss Whedon’s Firefly with robots and you have a pretty close approximation. While reasonably light on narrative (which isn’t a bad thing), there’s enough character conveyed in the visuals and through the witty dialogue to make keep you engaged with everything that’s going on, and it makes a change for the units in a strategy game to have a little more personality, as they all have something to say either during battle or back on your ship. Combined with their unique abilities, you’ll always have a favourite team to bring into battle with you, and be genuinely sad if they fall in battle – the sign of a good strategy game – although there’s no perma-death to fear. Adding to the general character of Steamworld Heist are the stylised visuals that really pop out, even on the small screen of the 3DS. While the amount of screen real estate is quite limited, everything is big and bold in order to really bring characters to life. Playing on a New 3DS in 60fps may seem like overkill for a turn-based game, but it’s always nice to see a developer take advantage of the added technical specs of the machine, even allowing you to use the right stick to scroll around the screen, which is a little more natural as you use the D-Pad for movement and menu navigation.

The audio is also a high point, from a small amount of radio play-inspired narration during the very occasional cut-scene, to the meaty gunshots and explosions, or the occasional robotic exclamation during text conversations, with even some absolutely fantastic background music, including some actual vocal-tracks in some areas that surprised me with their sound quality, it’s excellent. I usually play handheld games on the bus while listening to music, but with this game I was compelled to have my headphones plugged in for a change.

Heist is light in terms of actual strategy, but that doesn’t mean that there isn’t a challenge. Being able to change between four different difficulty levels before each mission means that you can make things as easy or as devious as you’d like, and these different settings also change how much XP you earn, or the currency penalty you get for failing (or quitting) a mission. I wouldn’t say this is a game that requires grinding, but with a star system that encourages you to finish levels by grabbing the “Epic” swag and getting out without a fallen comrade, replaying levels does have its own rewards, especially when it comes to trying out new tactics or even making sure your team are of a consistent level. As you pick up new weapons/items and unlock new abilities, you’ll be surprised at how different your tactics change over time, as there are some tough missions out there, with some difficult boss fights that require some real thinking.

Something else you need to juggle is the inventory system, which only has so many slots. You can buy more slots and sell items to make space, but for a game with so many different avenues for experimentation in terms of customising the team, I would have preferred a bottomless storage space for the mountains of new swag that’s obtained on every mission. Being forced to sell perfectly good items to make space is frustrating, and quite limiting.

I’ve been having a blast with this game. It’ll take you around ten hours to see the end, but not once does it ever outstay its welcome, and there’s always a New Game Plus mode that puts you back to the start with all of your unlocked crew members available. This is a game with incredibly fun combat mechanics which are the basis for one of the most enjoyable 3DS games this year.

An incredibly fun combat mechanics is the basis for one of the most enjoyable 3DS games this year.

Steamworld goes RPG with Steamworld Quest out this year