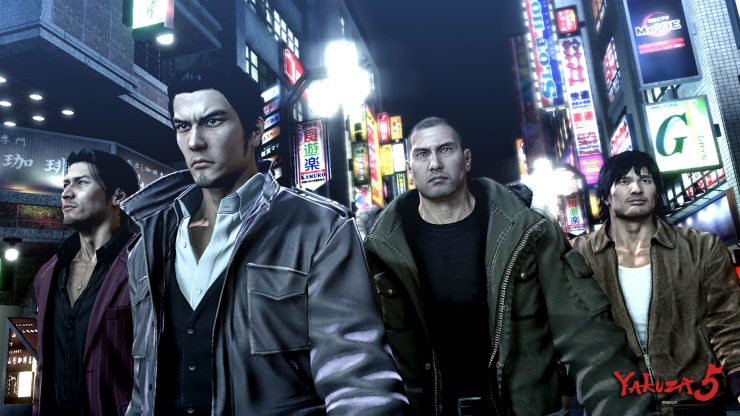 Once a powerhouse in the video games industry, Sega has dwindled in recent years and now has only a handful of gaming properties to call its own. Thankfully, they still have their hands on Yakuza, and although many are unfamiliar with this epic franchise, it is certainly one that you should become acquainted with. Yakuza 5 may suffer from a few flaws, but the core experience is richly enjoyable and somewhat different to what you may have seen in the past.

The story is profound and extensive, featuring hours and hours of intrigue, violence, and typical gangster tropes, yet it never feels dull or repetitive. If you’ve ever watched Infernal Affairs or The Godfather, Yakuza 5 will be something you’re going to want to play. Each character has an interesting story to tell and the arc of Yakuza is thoroughly enchanting. If you really want to play it, but are worried about catching up on the story, there is an option that lets you watch previous videos from the last four games, which is a welcome touch.

It is quite clear from the start that you’re in it for the long haul, and it takes at least ten to fifteen minutes before you actually get to do anything because of the length in its opening. As you put time into the game, more and more of these cut scenes affect the flow and add many minutes onto your play time. Depending on whether or not you’re immersed in the story, it can sometimes become frustrating as you can go a long time without actually playing the game – sacrificing gameplay for the cinematics. There are five locations which all feature stunning environments and plenty to do for each of the five main protagonists. You start playing as series regular Kiryu Kazuma, who has changed his name and is living in Fukuoka, masquerading as a taxi driver. Later, you’ll get to play as other returning characters such as Taiga Saejima, Haruka Sawarmura, and Shun Akiyama, with newcomer Tatsuo Shinada also being playable as a disgraced former baseball player.

There is plenty to do and after a few hours of typical tutorial missions, you’ll start to appreciate what Yakuza 5 is trying to achieve. Like Shenmue, you are made to live the life of its characters. Not only are you tasked with completing story quests, you’ll also be expected to carry out your typical day-to-day responsibilities (like the forklift truck section in Shenmue). As Kuzuma, you’ll wake up and go to work at the taxi company. There, you’ll choose missions which will involve taking a customer from one place to the next. You get points for driving within the speed limit, indicating, and even making small talk with your passenger. Don’t expect an opportunity to go ‘GTA’ behind the wheel because you are rewarded for your patience and driving etiquette. To some it will become frustrating and at times it got to me, especially when you have to do certain missions within a time limit. But it really is a nice touch that makes the game different to so many others out there. Sega has tried to make Yakuza 5 as immersive as possible with its diverse quests along the way. I’ve helped a young lad study by answering exam questions, jumped behind the counter of a noodle bar, and begun to collect trash off the street within, all within the first few hours, encountering tons more mini-games and quests before the end of the game. There are tons of racing mini-games that are very reminiscent of Virtua Racing from back in the day, and the fighting also harks back to Shenmue and Virtual Fighter.

You’ll also be able to visit Club Sega (Yakuza 5’s resident arcade joint), where you’ll be able to spend your hard earned Yen playing Virtual Fighter 2 or Taiko: Drum Machine. Again, similar to the arcades and shops in Shenmue, you can collect and win classic Sega characters from the toy grabbers, such as Dreams and Opa Opa. If ever a game was a tip of the hat to a video game publisher’s history, then Yakuza 5 is just that. Combat in Yakuza 5 is probably its main downfall. With games like Batman: Arkham Knight providing such varied combat, the age of Yakuza 5 starts to show its face. Originally released in Japan in 2012, there aren’t really any updates to the way you fight. The repetition in pressing the square and triangle button takes its toll on your enjoyment, and after any fight the satisfaction in your victory begins to wear thin – even having the ability to thrash your enemy with foreign objects like bicycles and bins can become a chore.

Yakuza 5 offers all the pomp and quirk of Japanese storytelling which helps to lighten the mood of its heavy storyline. This is a game that not only delivers an immersive story, but it provides hours of entertainment – confidently giving the PlayStation 3 a strong game to finish on. Although the combat is repetitive and the cut-scenes feature far too prominently, Yakuza 5 is a fantastic game that brings together all the best arcade experiences Sega is known for, merging them with a great story that will take you hours to even scratch its surface.

Oscar-worthy story.
All of the mini-games and job responsibilities.
Club Sega and pachinko machines.
Applying Sega’s history in video games.

Yakuza 5 offers a different kind of open-world experience, giving you more of an immersive game than you may be expecting, even if it does suffer from repetitive combat and long cut scenes.