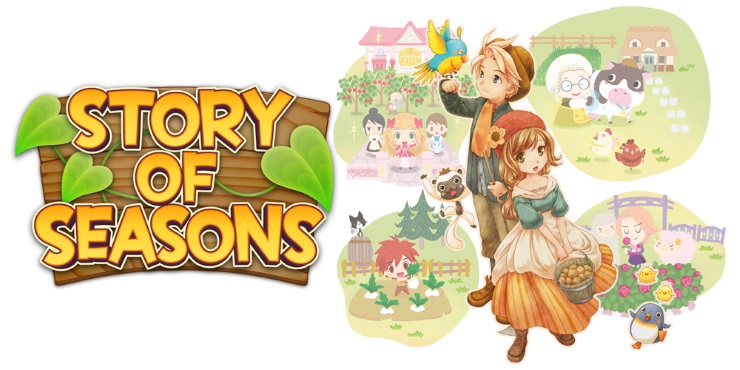 Imagine waking up one day, you’re fed up with the comforts and ease of modern city living and want a change in routine. What you want is to remove yourself from the hustle and bustle of the rat race and instead go rural, become a farmer, and create the best produce you can. In Story of Seasons you do just that. If there’s one word that adequately sums this up it’s ‘nice’. It looks nice, it sounds nice, the NPCs are nice, and as a game to relax with, it’s nice.

After an opening that holds your hand so much I almost fell asleep, Story of Seasons has you running your own farm. You have a handful of seeds to start planting crops, a fistful of gold to buy a few more tools to set you on your way, and a cow to milk. You’ll learn a new skill each day, and this goes on for a while, so much so that to begin with you’ll be struggling to fill your day with activities. For example, after watering my crops, milking my cow, going swimming for fish, and scavenging for other items, I found myself making my character go to bed at around 5pm just so I could actually do stuff instead of waiting for darkness to fall.

But as time goes by and things open up you’ll find that there’s an abundance of things to do, and by the time Autumn rolls around you’ll find yourself struggling to fit everything into a single day. Each day lasts twenty-four real minutes, the hours tick by every sixty seconds, so by the time I watered my crops, collected the milk, brushed and sheared my sheep, picked up the eggs, and let the animals out it’s normally gone 10am, and this is without me tending to the other fields that I’ve collected and planted crops on. All the shops have opening and closing times (as do any traders that come to town to allow you to buy/sell goods), so you need to make sure you plan your time accordingly to ensure you are able to do business before the day is out. Added to this are a selection of extra activities too: livestock shows, fashion catwalks, prize crops, festivals, town decoration – you even get your own little shop so that you don’t have to rely on the presence of traders to do business. Making sure you participate in as much as possible is a fine juggling act, especially when you have a particular goal in mind.

Anything can be sold to the traders as well: things you make, and things you pick up. Made a set of benches you no longer want? They’ll have those off you. Got a bunch of grasshoppers in your pocket? They’ll take those, too. Your character has superhuman reflexes and is able to catch insects and fish with their bare hands, keeping a swarm of bees in your trousers is always handy for making sure you have something to sell on to maintain cash flow. The hit-box for the insects varies wildly, however: some you can pick up when you’re right on top of them, others will allow you to grab them when you’re about three feet away, or even behind you. I know they’re not supposed to be easy to catch, but it’s wildly inconsistent.

One of the more arbitrary elements is the titular seasons and how the crops relate to them. Certain crops grow better at certain times of the year. If it isn’t the right season for a crop you can’t plant it, and if the crop is still in the ground at the end of its season it will wilt and die instantly. This is not made clear until the first season ends and you find out that all the crops you planted only days before have died and you wasted your money on them. It’s also annoying that vendors don’t start selling new season seeds until the new season starts, keeping you a step back on building up your crop cycle again. Considering the nice touch of not having to water crops if it’s raining, having your crops die literally one day into a new season is a rather unfair, gamey mechanic which could have done with a bit of leeway in how it treats the player. Finally there’s harvesting. Some crops can be harvested by hand, while some require a sickle, which is fair enough; but it isn’t always clear when something is ready to harvest, and whether it’s ready or not the indicator for sickle use comes up if you’re holding the tool. I’ve lost a few crops by scything down unfinished crops because I had no idea that they weren’t actually ready. It’s pretty frustrating when it happens, and there isn’t much you can do about it except try and be very careful when you’re gauging readiness.

These niggles are minor though, and once you know of them they can be avoided leaving you a game that you can wile away an hour or so with on a regular basis, and when you’re not playing you may find yourself – like me – figuring out what you’re going to do on your next day. Story of Seasons is not going to set the world alight. There are no explosions, no dramatic story, or ever present antagonist; it’s just a nice clean game, something different from the usual AAA deluge of guys with guns, and sometimes, that’s just nice.

It’s really nice.
Loads to do (when it opens up).
Nice to relax with.

Takes an age to get going.
Arbitrary ‘gamey’ mechanics.
Obtuse harvesting functions can cause crop setbacks.

An inoffensive yet unspectacular game that pleases through being something different and relaxing.