previous
Dishonored: Death of the Outsider Review
random
next
FIFA 18 Review
Game of the Month
0 likes 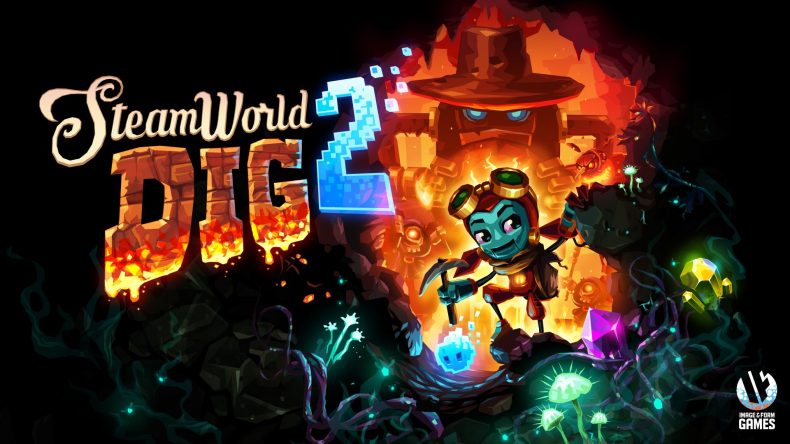 It’s hard to believe that it’s been four years since SteamWorld Dig was released. Originally exclusive to the Wii U it developed a bit of a following, and at the time I didn’t have that console, so, when it finally came to PS4 and Vita I snapped it up. I have fond memories of playing it on my commute, and getting home, syncing my save and continuing on my PS4.

When the sequel was announced I was understandably excited, and the idea of playing on the Switch with that same handheld to console synergy… well, I’ve been eagerly anticipating this for a while. I was right to be excited, Image & Form have easily matched and bettered the original game, retaining everything that made the original special despite the missing Rusty.

The lack of Rusty means that the blue bot from the olde town, Dorothy is out to find him. There are earthquakes, a doomsday cult and a panicky populace in the town of El Machino. Rusty’s apparently been through, but hasn’t been seen since the earthquakes started, it’s all very suspicious. Anyway, this means that Dorothy has to take up Rusty’s favourite past-time of mining in a quest to figure out what he has to do with the current goings on. You’ll carve your own pathways through the rather large caverns, collecting ore and killing creatures, all the while a chill soundtrack plays. It’s very relaxing, and nice to just take it easy, plot your route to the objective and mine away. Mistakes in your route don’t matter, as you’ll always have a way to get back up via wall jumping, or, later on, a grappling hook and rocket boots. The way these new abilities are dished out is glorious, with Dorothy entering a forge under a burst of steam, then turning bright yellow like she’s just been reforged, it’s a lovely touch.

Dorothy’s abilities aren’t the same as Rusty’s. Instead of a steam jump she has rocket boots. There’s no big drill, instead Rosie gets a jackhammer to get rid of pesky rocks, but the best thing is that grappling hook and zipping Rosie from spot to spot. A lot of the latter puzzle rooms require deft use of this item with some rather clever implementations required for you to claim your prize. Almost all of her abilities can be upgraded as well, and each can also be enhanced with cogs, granting extra bonus abilities like extra light, damage reflection and more. It’s not possible to get every cog modification, so you’ll need to curate them for where you find yourself. The game’s pace is very chilled, but it can take a while to get going. For the first two hours the constant trips back to empty your bags do take their toll. There’s also one really horrible segment just before the game really gets going that’s awful to play through, and could be nightmare inducing for young children, my son loved the original game, but I have to worry what his reaction would be when he plays that part.

Still, once you’re through that, you’ve emptied your pockets a few times and upgraded your bags and furnace, things open up considerably giving you more time to move about and discover all the little things Image & Form have squirreled away in all the nooks and crannies. It’s always nice to follow the objective, going the fastest route from A-to-B, but the joy is in exploring, finding rocks to bash through and seeing if there’s a path there for you to discover. There’s a whole load of caves to find along the regular route, but there’s just as many off the beaten track as well, all with their own little treasures and trinkets to find.

Sadly, the biggest downer with SteamWorld Dig 2 is it’s length, I’ve already mentioned it takes its time to get going, and when it does it’s over all of a sudden. I must admit that when I defeated the boss at the end (something I never managed to do in the original) I kind of hoped that there was something else, something more for me to dig my way through, but it never came. I guess that when you find yourself wishing that a game would go on then you know that that game really has imprinted itself on you. This is such a charming game, the trademark harsh lines and bouncy animation are sublime, the music is soothing (until the action ramps up and it really gets your pulse pounding), and then there’s Fen. A companion character wasn’t needed in the original, but Fen is just great here, and his dry wit and love of destruction are very welcome as you explore the world. His character arc is also well judged, from original boss to a devil on your shoulder, through to caring and compassionate to his host, he’s alright for a little blue flame.

There’s so much to like about SteamWorld Dig 2, but like the game itself it’s all about exploring. There’s not much to complain about, and a short run time should only bother you if you’re doing a straight run to the finish. Take time to look around and you’ll find the length increases considerably, it’s all about getting out what you put in. As a working father a short game is very welcome as well, all too often games fall by the wayside, and as a result a game that isn’t a 100 hour epic, that I can take at my own pace is a blessing. This is everything I could have wanted from a sequel: an utter triumph.

Beautifully sedate
A joy to play
Fen is brilliant

Slow to start
One harrowing segment
Possibly too short

Dorothy and Fen’s adventure is a brilliant slice of zen gaming, a treat. Image & Form have knocked the it out of the park with this sequel.

You may also like
Image & Form GamesSteamworld Dig 2Reviews

Steamworld goes RPG with Steamworld Quest out this year

Gear up for Steamworld Heist by Watching the Launch Trailer