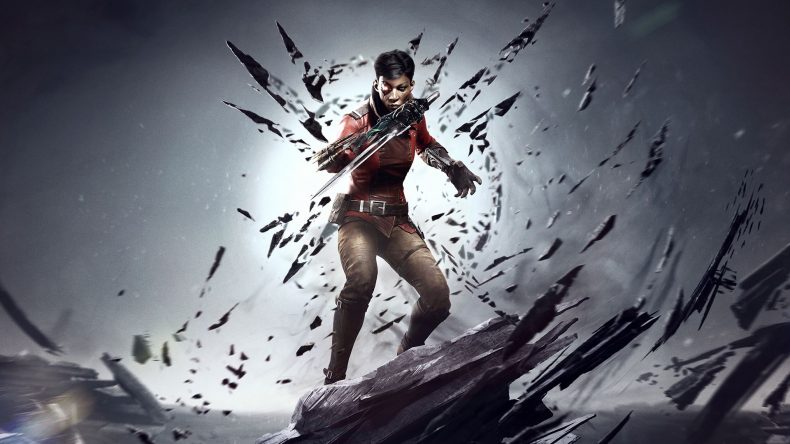 This is a weird one, isn’t it, killing the Outsider? If you’re a fan of Dishonored at all, that’s like being asked to go back into McDonald’s for a second helping of nuggets – oh, and would you kindly brutally slay Ronald on your way out? Possibly with rats? Ta.

For many, myself included, the Outsider is one of the franchise’s most interesting characters. Actually, he is the most interesting, with the possible exception of unlikely fan-hero, Daud. Ironically, it’s on behalf of the latter that you’re aiming to end the former in the first place.

In Death of the Outsider you play as Billie Lurk, the real name of Meagan Foster, the enigmatic ship’s captain who helped Corvo and Emily slip about the salty shadows in Dishonored 2. Apprenticed to master assassin Daud and also marked by the mysterious, god-like Outsider, Billie seeks nothing but vengeance on the otherworldly entity for the life he stole from her – and countless others -amidst his nefarious schemes. Because this is Dishonored, kindness must be paid with kindness, and vice versa. Which means lots and lots of brutal executions. Thankfully, the Chaos system has been removed for this half-sequel. Not “thankfully” because it was a bad system (in fact, it was one of my favourite elements in the other games), but rather because it lightens you of any moral baggage. Forget what’s right and wrong or what will happen to Dunwall or Karnaca or your own soul if you murder that guard sitting there chatting about contracting the clap from his favourite working girl, and instead do what you really want to do, which is eviscerate him with one of those horrific spring traps. Go on, you know I’m right.

The point is that Death of the Outsider is a less restricted experience, which certainly helps to counteract the fact that it’s only five missions long, and as fun as it is to experiment with routes, rogues and rodents, you won’t stretch it out forever. The structure follows the template of the other entries, allowing you to potter about in a semi-open environment pre-mission, where you can buy gear and search for Bonecharms, or collect optional Contracts. Sadly, these aren’t standalone assassination missions, but conditional changes to the established objectives, asking you to “ghost” a specific mission or, conversely, kill every single guard you find in it.

Exploration is always fun, not only because of how smoothly Billie moves, but also because it’s such a pretty game, the level of detail arguably unparalleled outside the velvetine folds of the franchise. The environments drip with atmosphere, the snatched snippets of conversation as you eagerly eavesdrop on innocents and enemies alike bringing the world to life around you. Reinforcing the idea that the Outsider gifts everyone differently, Billie possesses powers unique to her. She has a new version of Blink called Displace, which allows you to place a shadowy version of yourself at a location within range and jump to it. It’s not always as instant as Blink, but it opens up some interesting avenues if you’re the kind who enjoys toying with your victims. She carries nothing as cool as the butterfly blade, but her wrist-mounted projectile weapon is lethally accurate and can be loaded with various ammunition types.

To help Billie lurk all the more effectively, she has an ability called Foresight, which essentially stops time to allow her to stalk and mark targets, plan escapes and identify traps, all while draining her (now regenerating) void metre. Semblance, on the other hand, allows her to stroll around literally wearing someone else’s face, which is both creepy and cool at the same time. Although there’s no character progression this time around (one of the things I do lament losing), and you have all your skills handed to you early on, her powers amount to making Billie an incredibly dangerous, almost overpowered protagonist, which is counterbalanced wonderfully by her willingness to dive headlong into the fight of her life.

Even as a mostly quiet protagonist, she projects the persona of someone both gutsy and determined, resourceful but somewhat clueless. She’s winging it, and it shows. Perhaps the biggest and coolest piece of supporting evidence for this is that she listens to the rats for guidance. The actual rats, disturbing little sods who prattle on in preening purrs about bright blood and knives and the horror of hounds, occasionally divulging a useful morsel of information. The missions themselves are intricate in ways only Dishonored can manage, and while there’s always the option of speed-running (and indeed, you’re encouraged to replay missions with self-imposed parameters thanks to a “custom” difficulty level), the true fan knows that these games are about taking your time, exploring alternate routes and laying the groundwork for carefully-plotted mayhem. This is never more apparent than a few missions in, when you have to rob a bank filled with both human and clockwork guards. It’s not as incredible as the Clockwork Mansion from Dishonored 2 – from which it so clearly takes its level design cues and visual inspiration – but it’s definitely Death of the Outsider’s standout mission. There’s a heightened sense of tension as you creep about trying not to wake the guards you’ve gassed to sleep, all the while avoiding the gaze of the ever-watchful Clockwork Soldiers.

Oddly, there’s very little story to experience. Billie is a compelling character, her grab-bag of powers, tormented backstory and steampunk bionic body parts making her at least, if not more, interesting than Emily or Corvo – but she’s given little room to breathe or even fully justify what she’s doing as she’s doing it. The Outsider features more regularly, though, for obvious reasons, and learning more about him is worth the asking price.

Not a departure from what has come before then, but a wonderfully brutal and well-made companion, Death of the Outsider succeeds in simultaneously leaving you satisfied but making you want more. Not necessarily more Corvo, Emily, or even Billie, maybe not even more Karnaca or Dunwall – but more of the world, the universe, the atmosphere and aesthetics. After a bloody five-year campaign, I can only hope that this isn’t the last we’ll see of Arkane’s beautifully brutal adventure series.

Not all that long
No character progression
Nothing really new

A fantastic expansion to an excellent game, Dishonored: Death of the Outsider is a macabre joy to play from start to finish.