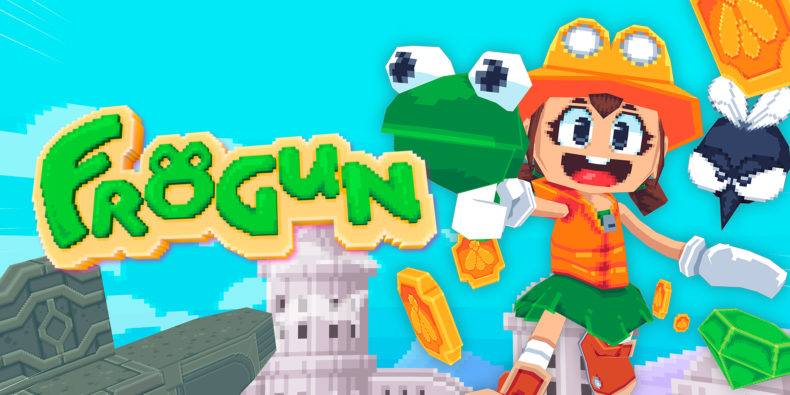 I think it’s fair to say that most platform games are fairly fast-paced. Whether you’re running left to right in Sonic the Hedgehog 2 or swinging through the air in Hell Pie, you’re probably doing it as fast as you possibly can. But what if we took our time jumping over spikes and enemies? That’s a question Frogun asks and answers, all while throwing hundreds of collectables down your throat.

Renata isn’t your average child. She spends most of her days adventuring through ruins with her archaeologist parents. Their latest adventure is apparently too dangerous for our adorable young hero, so they leave her at home. When her parents don’t return, Renata decides it’s up to her to save them and armed with the titular Frogun she sets off on an adventure that’s admittedly not particularly safe for a kid. 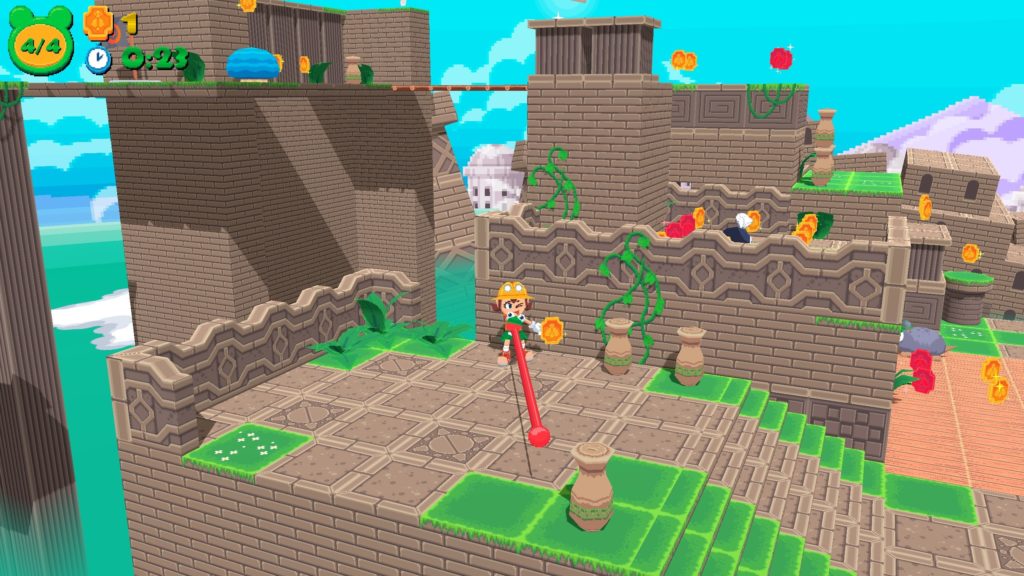 You’ll notice pretty quickly how much slower Renata moves than her platforming peers, with a saunter and a jump that will barely get you over the smallest of gaps. Fortunately, the Frogun gives her the ability to make it through even the most trap-laden ruins, because if you shoot its tongue at a surface it’ll stick to it and pull you over. Insect enemies are also powerless against the Frogun, and before you know it you’ll be licking them up and hurling them at walls willy-nilly.

Each stage of Frogun is packed full of collectables, and you’ll really need to search every corner to grab the lot of them. At the end of a stage you’ll receive an emblem for each collectable you find 100% of, and if you’re a completionist you’ll have a blast scouring the stages for a particularly tricky Obsidian Skull.

As well as grabbing all the collectables, there are also emblems awarded for beating levels without dying and getting to the goal within a certain time limit. It’s impossible to manage these objectives while also finding all the shiny stuff, so expect to replay levels over and over again if you can’t cope with a missing emblem or two. 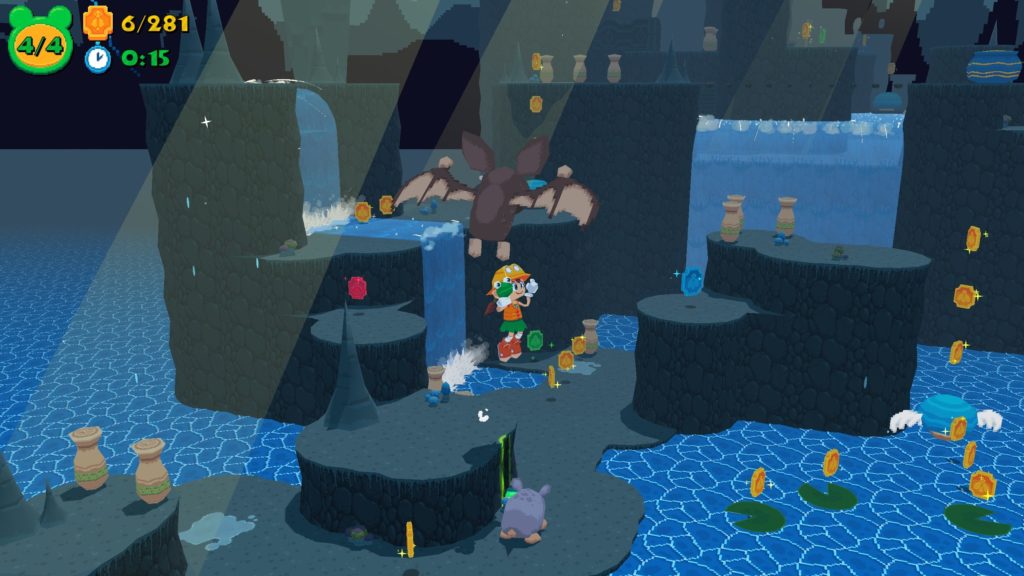 You’d think that wandering slowly through a bug-filled temple would be a little dull, but the pacing is actually ideal for the focus on exploration. Also, each new world is packed full of different traps and bugs to deal with, from icicles that fall from the roof to fire-breathing flies. It’s hard to get bored when the game keeps throwing new stuff at you.

The boss stages are especially fun, with plenty of dodging required if you want to beat them. Learning to avoid all of a boss’s incoming attacks is key to survival in these encounters, but if anyone can handle it, it’s Renata.

Not all levels are created equal however, as you’ll find out when you play your first race level. Facing off against a rival treasure hunter who thinks Renata is bad news, you’ll need to rush to the end of the stage ahead of him if you want to carry on your adventure. If you touch him though you’ll take damage, and what ensues is an incredibly frustrating experience where he is more of a danger than the entire rest of the level. There are also no checkpoints in the stages, which means starting again and having to listen to your rival trash talk over and over again. 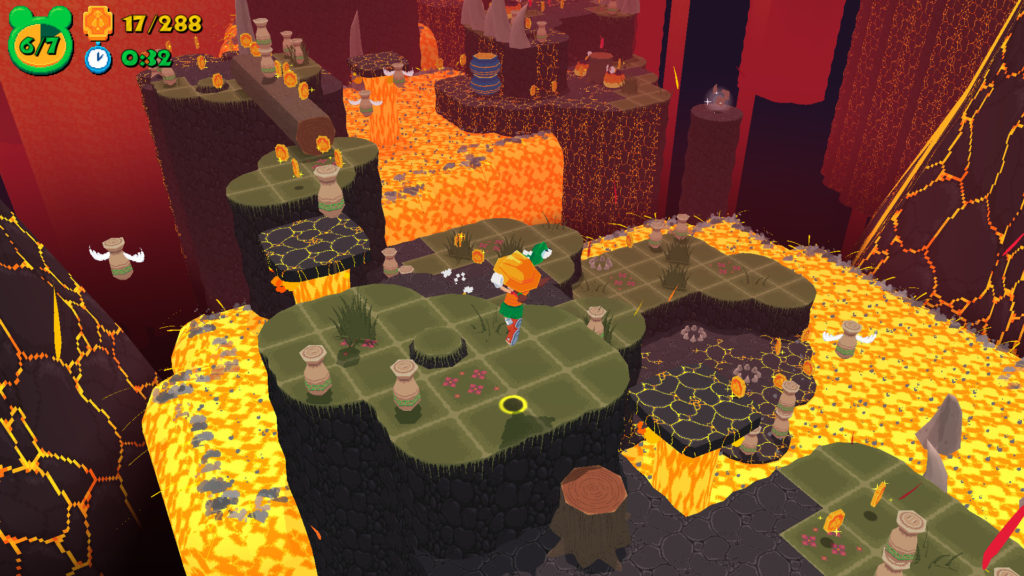 Checkpoints are often an issue in Frogun. Not necessarily because they’re far apart, but because you’ll be forced to collect every single coin and gem again if you die before reaching the next one. Slowly pottering through a level, smashing every single vase for the third or fourth time just feels exhausting.

It’s made a little less torturous though thanks to the visuals and audio. The art style is clearly inspired by the Mega Man Legends games, and seeing this tarted up for a modern-day game is really delightful. The soundtrack is great too, with incredibly catchy tunes accompanying all your adventures.

Frogun might not break the mould, but it’s a fun platformer that anyone who loves gathering trinkets and aiming for 100% completion will enjoy. Issues with checkpoints and the dreaded race levels hold it back from being essential, but if you’re hankering for a 3D platformer you could do much worse than Frogun.

Frogun is great if you like collecting every last coin, but some bad levels and checkpoint issues hold it back.