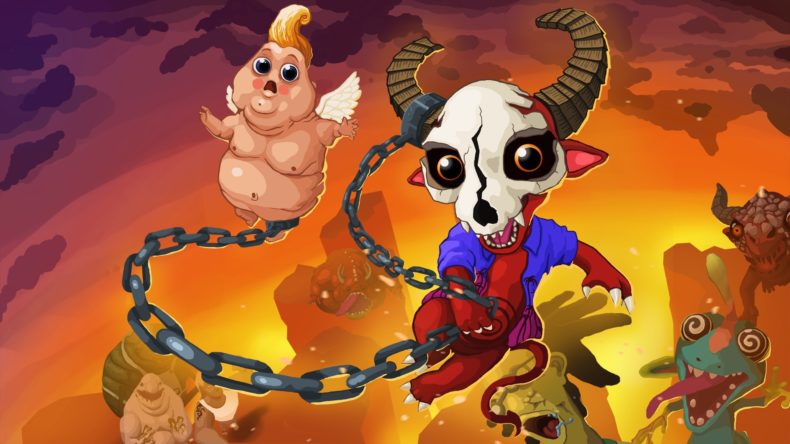 One of the easiest ways to ensure I enjoy a game is to make getting around fun. It doesn’t matter if I’m leaping from one building to another in an open world game like Crackdown or finding the best strategic placement for my Worm with a Ninja Rope, as long as getting from A-to-B is fun I’m a happy camper. By adding a grappling hook to a 3D collectathon platformer, the developers of Hell Pie have pretty much made my year.

Our hero (and I’m using that term very loosely) Nate doesn’t get a lot of respect down in hell. He’s the demon in charge of the eighth deadly sin – bad taste, and doesn’t seem to have a whole lot of responsibilities down at Sin Inc. When Satan personally asks him to arrange to have a pie made for his upcoming birthday party, Nate is assigned a tubby little cherub called Nugget and sent up to Earth to gather ingredients. 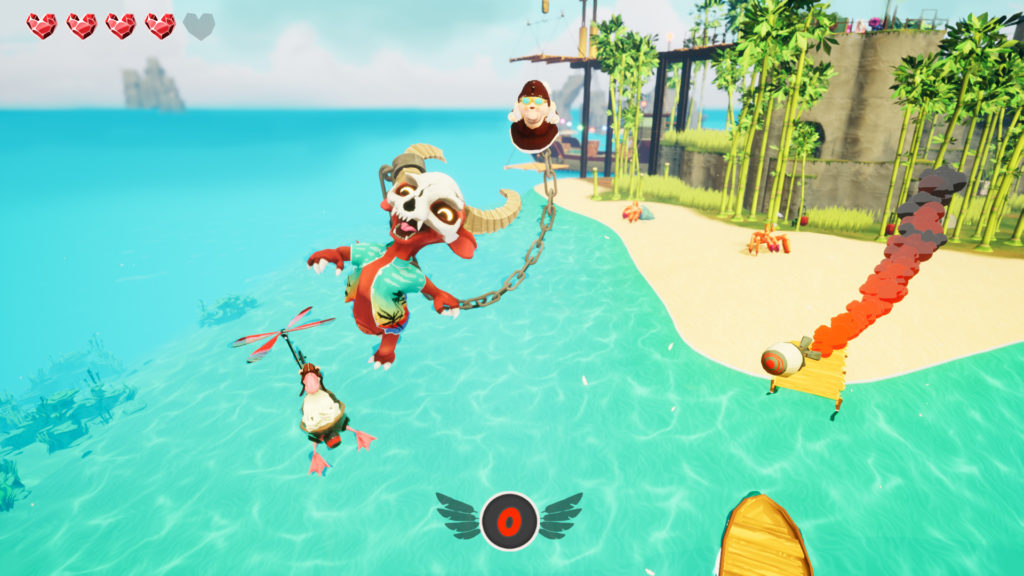 Once you arrive on Earth via a long ride in a lift, you’re greeted by a bright sprawling hub area full of collectibles, sub-levels and charming locals. There you’ll get to test out Nate’s wonderful powers. Like most platforming protagonists he can jump, double jump and do little dash, but with the help of his baby Donald Trump lookalike sidekick his manoeuvrability becomes much more interesting.

By using Nugget as a sort of mid air anchor point, Nate can swing from the chain that attaches the duo and grapple his way to all sorts of locations. It’s a simple enough concept but when you spot a collectable at the other side of an impossible looking gap and nail the perfect combination of swings and dashes to reach it, it’s just magical.

Your main objective in Hell Pie is to gather enough ingredients for your baking quest, but fans of shiny shit will have plenty to keep them busy. Each hub area and sub stage has a list of collectibles to find, from tins of Candymeat to golden lucky cats. Hidden in hard to reach places it’ll take all your baby swinging prowess to get them all, but you’ll be rewarded for doing so with all sorts of new powers. 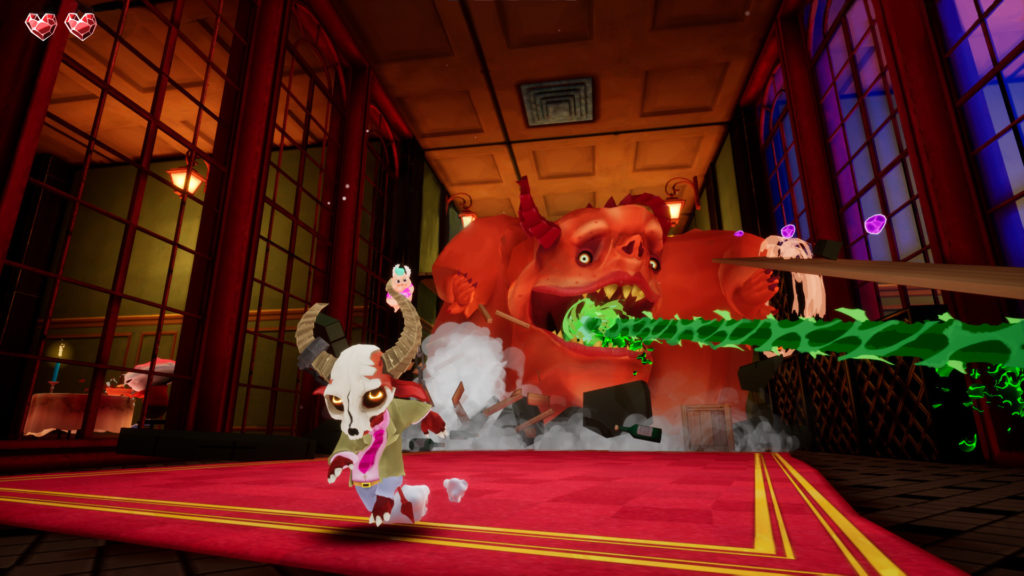 The tins are the most important of all the collectables, because they’ll enable you to upgrade Nate and Nuggets powers in their skill tree. By default you can only swing from your cherub ally once before landing on solid ground, but once you’re fully upgraded you’ll be able to swing five times in combination with all sorts of aerial manoeuvres to practically fly around any environment. It’s such a joyous experience, and although it sometimes trivialises the difficulty you’ll be having too much fun to care.

Other important unlockables include horn upgrades you get by finding sheep to sacrifice at altars. By tearing enough horns off their adorable faces (which is as horrendous as it sounds) you’ll be given a new power to help you on your quest. Your initial horns can guide you to places of interest in a hub world, but before long you’ll have horns that let you sprint at super speed, horns that smash down walls, and even glowing horns to help you in dark places. Most of these abilities are pretty helpful, but by the end of the game when you can grapple almost anywhere without breaking a sweat the late game abilities you unlock are pretty underwhelming.

As you might have guessed from the animal dismemberment, Hell Pie is a very crude game. The humour feels very reminiscent of early flash animation on the internet, with plenty of poo jokes, intense gore and gross out humour. You probably already know if you’ll appreciate this or not, but I personally found it quite refreshing in a world full of super serious emotional games to play a video game where I could swing a fat baby at Nazi pieces of actual faeces. 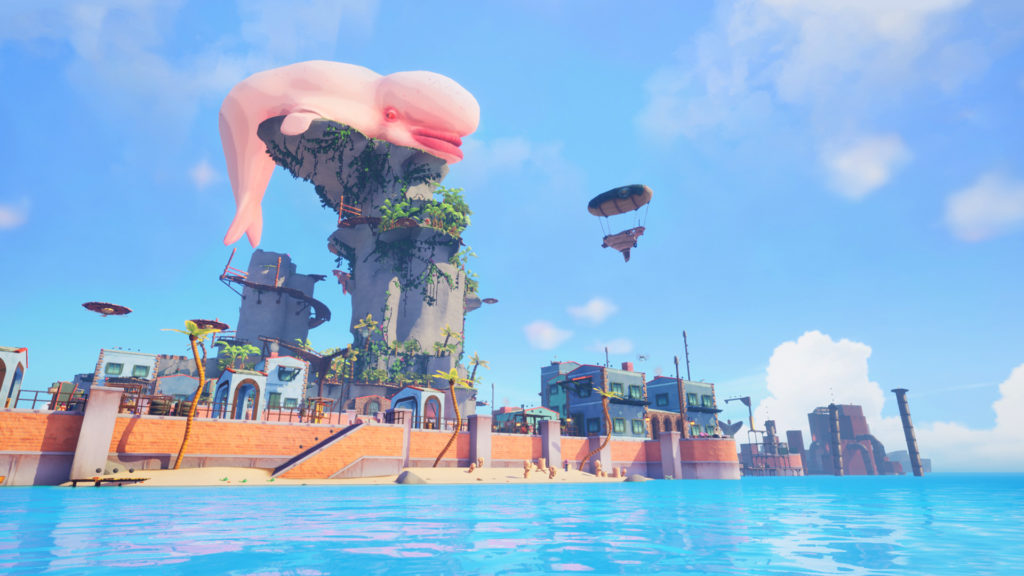 Just because it’s crude doesn’t mean Hell Pie isn’t packed full of ideas. Each more linear sub-level has a theme, and every single one of them is so creative. There’s a psychedelic drug fueled stage that sees you fighting off addict lizards to help a drug lord take his mansion back. Another stage is set inside a whale, which contains a community of people hacking at its innards to make delicious sushi. No two levels are alike, and the imagination on display honestly reminded me of the Psychonauts games (albeit filtered through the mind of a 14 year old boy trying to gross out his friends).

Although I absolutely adored my time with Hell Pie, it isn’t without faults. Some of the collectibles are tiny, and even on PS5 I struggled to spot them until I was practically on top of them. Also by halfway through the 8-12 hour game I’d also unlocked all the abilities I wanted from the skill tree, and it meant that finding collectibles was a little less satisfying (and much less necessary).

Hell Pie is a joyous experience for 3D platformer fans, with movement that simply can’t be matched by its peers. It will be easy for some to look down on its toilet humour and collectathon gameplay, but Hell Pie knows what it is and I’m very glad it exists.

Hell Pie is a 3D platformer that’s crude, rude and has some of the best locomotion in the genre thanks to its grappling gameplay.