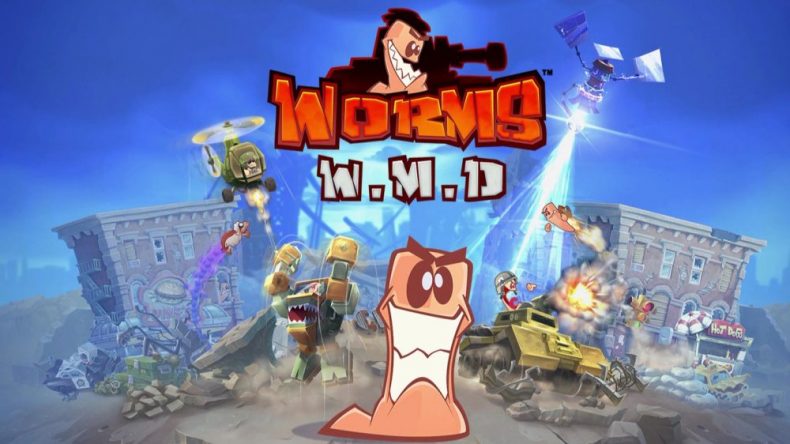 It feels like such a long time ago when the original Worms game came out, a turn based 2D strategy game where you had to take out all the other team’s units before they take out yours. Despite being based on earthworms the game held considerable depth, and served as a gateway for latent strategy fans. I had an innate ability to hit opposing units with a bazooka round from the other side of the map, but that skill disappeared when the sequels changed the wind readout meter.

Now twenty-two years later Worms W.M.D comes to Switch (after coming to other consoles and PC last year) and I have to say, it’s nice to see how the formula hasn’t changed over the years. The general make up of play and the sense of humour are still the same, and the new features slip in nicely alongside the existing template.The art style has evolved considerably, but while I believe games should grow and change, here it’s refreshing that they’ve stuck to their *ahem* guns. Ok, there may be some uninitiated, so, the premise is simple, you have a team of four and have to take out all your opponents worms. Up to six people or AIs can play, and there are several adjusters that can be applied, like more health, more time to take a turn, or splitting players into teams. A worm can be removed from play by either taking out all their health or by sending them off of the sides or bottom of the screen. That’s the gist.

Coming into the series are vehicles and weapon emplacements, which don’t offer any protection whatsoever, but they can augment your worm’s abilities and offer their own brand of weaponry for you to master. A sniper encampment allows pinpoint shots at anyone in line of sight, a tank allows you to fire shells in a large arc, there’s a mech which allows a glide and a rabbit punch and in an odd tie-in you can even get in a Rocket League car and backflip people off the map. The good thing about these is that they don’t really imbalance play at all. Any pilots can be damaged if the vehicle itself is hit, and if enough damage is sustained then the item explodes and damages the worm inside further. Also, if a vehicle is being piloted and you walk up to it, you can enter and kick the existing pilot out, so with the extra strength supplied by their weaponry there’s a risk factor involved in their use. Basically, make sure you hit your targets.

As well as this you’re now able to dismantle items you have no desire to use, this in turn gives you materials. Materials can also be gained from the crates that drop from the sky on a regular basis. The idea behind this is that you can craft weapons from these materials. There’s a wealth of munitions already available, but you can craft different variants of them, like a gas grenade, flaming baseball bat, or a Super Flatulence sheep. All of them work similarly to their original versions, but have different effects on opponents and the battlefields.

Craftable weapons means that you’ll rarely find yourself without item you want, they take a turn to craft but you can always plan for shelter for a turn while you make something to deal death with. You can create the regular weapons as well, you know, just in case you’re not sure if the effect of the new weapon is going to be effective enough for your current situation. All of these features are available in single player and multiplayer (MP being Worms’ raison d’etre of course). Single player takes five separate forms, from training up to bonus challenges. There’s a campaign of sorts that drops you into a location with a variable amount of worms and asks you to fulfil a goal with several sub-goals to achieve. During this campaign you can find wanted posters for nefarious worms that open up as challenge stages; here you’re required to think outside the box and use the tools at your disposal in a way you might not have considered before. It’s an interesting idea, but one that falls a little flat when you realise it’s a single solution to the problem, and if you do one little thing wrong then you’ll have to restart.

Thankfully, restarting a campaign level or a challenge is a relatively nippy process, unlike the loading times in general. Booting the game up requires a lengthy period of black screen before the usual splash screens make their appearance, and starting a game isn’t the quickest. But the thing that always worried me was when a game ended, either by loss or winning because once again there was a lengthy period of black screen and no loading symbol. I regularly thought my game had crashed only to finally have the screen blink into life just as I was going for the Home button.

Loading times are a minor niggle though, and while the single player does fall a little bit flat it does a good job of educating you on weapon usage and game mechanics. But, let’s face it, multiplayer is where Worms has always shined and it’s no different here. Get a bunch of friends together and duke it out; it gets a bit chaotic with more than four people playing, but with friends chaos is fun.

Worms is back and it’s Well Magnificent Dude.