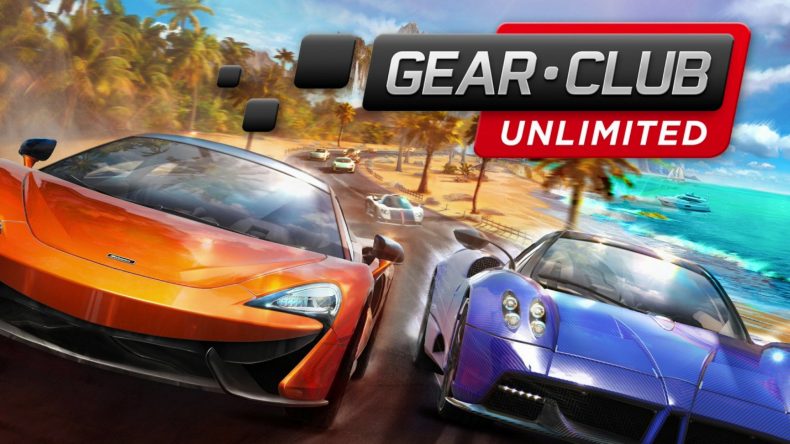 The Switch is still in its first year on the market, the past 9 months have seen it receive games built from the ground up to make the most of the hardware, and also a selection of incredibly well realised ports that really make Nintendo’s superb console their home. Eden Games’ Gear.Club Unlimited doesn’t really fall into either of these categories; it is a port, but it isn’t a good one.

What this is, is a full priced port of a free iOS app, the app in question being Gear.Club, the Unlimited suffix has been added presumably to say that the game has been shorn of any and all microtransacting, so that the whole game is open for one price. The origins of the title go some way to explaining why it has a name like an algorithmic mobile app designed to snare people looking for Top Gear, Driveclub or Test Drive Unlimited while offering none of the appeal that those games did.

For a racing game, Gear.Club’s biggest sin is just how pedestrian it all feels. The pace is so leisurely, and the aesthetics so uninspiring that it could well be the gaming equivalent of Valium. A brief lap in a supercar has you bumped out to meet your new manager – the gormless Jo – who liked your driving so much that he’s torn you away from your supercar to slum it out with racers by the name of Douglas, Liam and Jacky in a choice of a Camaro or a Nissan 370Z, not to be sniffed at, but a far cry from the monster that your were behind the wheel of to begin with. Anyway, now you’ve got to work your way up from there to being the Gear.Club champion or something or other, I wasn’t paying much attention as I was imagining doing terrible things to Jo’s face. As you race you’ll earn stars, one for finishing a race and three for coming first, with a second one being awarded arbitrarily somewhere in between. Earning stars unlocks new race areas with more race courses, although the courses each area houses tend to be so samey that you’ll often struggle to realise you’re doing a different championship.

Money and XP is earned for winning championships, with the former being used to upgrade, while XP unlocks better versions of the workshops that allow you to add those upgrades. There are a lot of championships to do as well, which means lots of races to compete in, ranging from races, to rally races to time trials to, wait, no, that’s it. There’s a huge amount of events, but it all feels a bit too much like quantity over quality, and you can’t use the same car for all events, meaning you’ll have to find the sweet spot between upgrading or buying a new motor, but the grind required to do so is straight out of your typical free mobile app.

Granted, there are no cool down timers and no gouging for IAPs, but the monetary rewards are slight, and new cars are really expensive so you’ll be needing to make headway in those races to get somewhere. But, and I’ll go back to that point in the tracks being samey here, on a few occasions I found myself in what felt like really long championships, with me doing something like six or seven races, rolling my eyes every time I saw the ‘Next Race’ Button in the bottom left corner. After what seemed like an eternity I decided to head back to the map to see just how far I was through that particular championship only to find out I had already finished it. It was only four races, I had been stuck inside some permanent race loop and wouldn’t have known had my patience not worn thin and my curiosity decided to check out. The car models look great in the showrooms, and also in the pre-race cinematic, but look terribly boxy during an actual race. The scenery is bland, and there’s no real sensation of speed even after I had turned all the driving aids off. Speaking of which, you might as well do that as it doesn’t really make all that much difference to the handling, and if you boost your car’s power enough the occasional scrape isn’t worth worrying about as you’ll still win at a canter. Not only that, but there’s a rewind function, so if you do screw up a corner you can just try again. There’s practically zero penalty for driving badly, what with the rewind function and no car damage, so you might as well just go hell for leather.

The sound design is poor as well, music only occurs in the menu screens and sounds like it wouldn’t be out of place during the scenes between the sex in a 90s soft porn movie. Music only occurs in menu screens, with engine noises and ambient noise during races, so there’s not a single tune to get your heart, well, racing. Your engine sounds like a swarm of bees, and at one point the engine noise in my game stopped completely and I had to race with just the sound of my tyres scraping on gravel, which was probably the most interesting thing to happen in my time with Gear.Club. I actually downloaded the iOS version of the game as well, just to see if it truly was the same game, and yes, apart from the timers and slightly better graphics it is identical. Yes you read that right, the iOS version is considerably better looking than the Switch version, and it’s free compared to £45 for the console offering. Considering the game doesn’t invoke a desire for a lengthy play session you’ll probably find the timers for the mobile game much more palatable than shelling out the full amount for the whole shebang.

I don’t think anyone really thought Gear.Club Unlimited was going to be the Switch’s version of Forza or Gran Turismo, but it would have been nice if it had turned out to be a decent sim racer for the console. As it stands this game is just uninspiring and unappealing, which should not be the case in a game featuring some of the fastest and most glamorous cars in the world.

Customisation at least has some depth
Lots of events

The Unlimited May mean that Gear.Club isn’t shackled by monetisation, but the only real thing that will not be unlimited here is your patience.