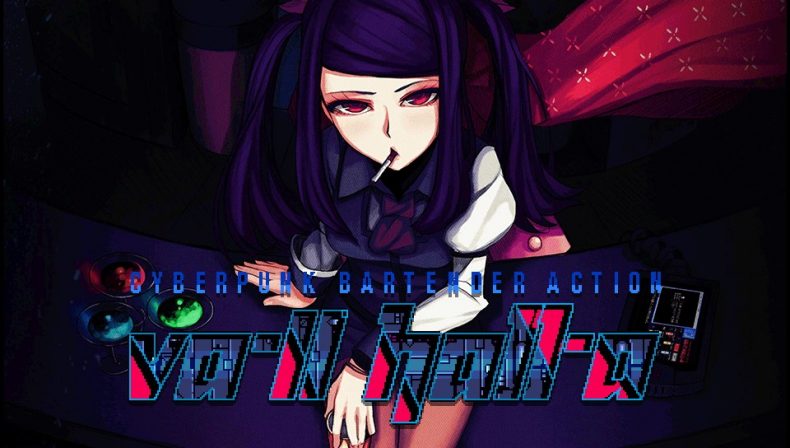 Over the last few years, there have been countless games that hype me up with a trailer only to release years later after said hype has long been deflated. VA-11 HALL-A from Sukeban Games was on my radar ever since the original tease and when I finally played it on Steam, the wait was more than worth it. It is the rare cyberpunk adventure that actually manages to remain interesting until the end with a unique mechanic and loveable characters. The Vita port from Wolfgame has been another long wait and I held back on playing more on Steam just to be able to play it completely with more endings and seeing everything on the Vita. It felt like a perfect fit and the port is almost perfect.

You play as Jill (Don’t call her Julianne) who works as a bartender at VA-11 Hall-A. The story is nonlinear and instead of being decided by dialogue options, it changes depending on the drinks you make for patrons at the bar. There are regular clients with their own personalities and the people who work at the bar themselves who slowly grow on you. Jill’s interactions with clients changes as well over time and I can’t imagine a situation where you don’t end up loving at least a few of the characters here. I don’t want to go into details to avoid spoilers but there’s a lot of heart, mystery, and just plain fun here. The delivery of the story also isn’t what you’d expect and is told through anecdotes from various people in the bar giving you background and also just learning about the clients and visitors as they ask for drinks. Highlights from the cast are most definitely Art Von Delay, Alma, and Streaming-chan. Mixing drinks and serving a particular drink to people is basically the main gameplay here. When someone orders a drink, you either make it yourself using the various ingredients and then blending or mixing or look at your in game guide for the recipe, or some suggestions based on flavour or type. Some drinks have an optional Karmotrine ingredient. This is the alcohol component and using more will get the customer more drunk. In my first playthrough I did my best to get everyone drunk. It did not end well. Each day ends with you being paid and spending some time at home or in story segments. There are multiple endings and you can get a bad ending quite easily if you spend foolishly when you gain access to buying stuff for your apartment.

The Vita port supports both touchscreen and button controls. The implementation of button controls here is fantastic. The port has exceeded my expectations in that regard, but the touch controls are a bit of a let down. The core drink making is handled brilliantly with touch, but you can’t actually progress dialogue with it. The drinks menu has some elements that work with touch but others are too small to be tapped so it feels a bit inconsistent. Having played a lot of visual novels on the system, there are some text and dialogue features I’ve grown accustomed to like having a text skip option or a proper backlog with dialogue. While this isn’t a pure visual novel, it would have been great having those in the port. The only other issue with the port is how some screen transitions between days take a few seconds longer than they should. Music and visuals are what got my attention when the initial teaser was released and this is one of my favourite games on both fronts ever. I absolutely love the character designs and the subtle animations at play both in characters and in the bar environment. The title screen itself is worth having a big poster of framed in your room. The great thing about this releasing before the end of the year is I can put Michael Kelly’s brilliant soundtrack on the best soundtracks of the year list. Songs like A.Rene and Every Day is Night have been in my regular rotation while working since the PC version launched. It fits the aesthetic perfectly and there hasn’t been a combination of visuals and music that has appealed to me this much in a very long time. The in game jukebox you set before each day allows you to experiment as well. Try finding a favourite and setting only that song for the full day for a nice surprise.

VA-11 HALL-A is a very special game. Sukeban Games have something great here and I hope more people get to experience it. Wolfgame has done a great job with the port. The 10 plus hours you spend here will be more memorable than most things you play in 2017 for sure.

VA-11 HALL-A is a brilliant point and drink adventure game with memorable characters, a superb soundtrack, and some of the best writing out there that has found a new home on the Vita.

You may also like
VA-11 HALL-A: Cyberpunk Bartender ActionReviews