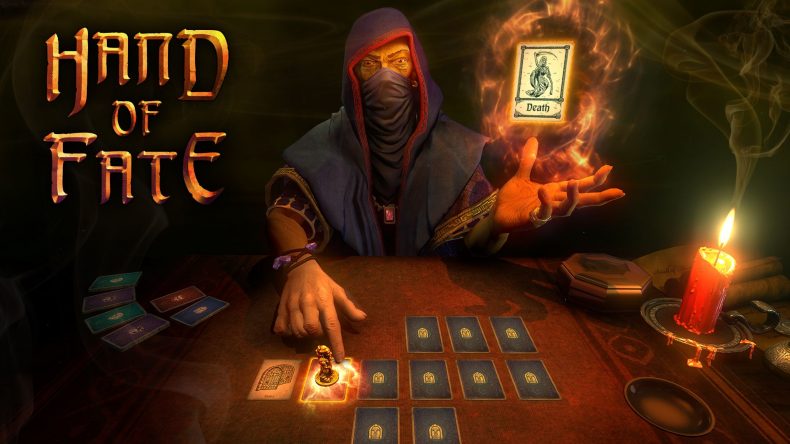 Card games aren’t my thing, I must admit. I struggle to grasp their rules and the complexity of their systems, so when Hand of Fate 2 was given to me for review, I was a bit worried. Luckily, despite its card-based nature, it’s more like a tabletop game with playable fight scenes.

To set the scene, you’re sat down at a table with a masked fellow that looks like he should be off selling Leon S Kennedy weapons, and he will tell you stories of adventure using cards that are set out in front of you. A small figurine of your created character stands beside the face-down cards, and you’ll use each turn to step onto each card, revealing its contents via partially-scripted events. These can range from shops and story moments, to events that require dice rolls in order to determine the outcome of the scenario. Should you fail a dice roll, you’ll likely end up in a fight. This is where the game changes things up, as you’re tossed through a magic portal (a loading screen) and transported to a small arena in which you’ll fight it out to the death. The combat is very reminiscent of the Batman Arkham series, possibly the finest example of melee combat in all gaming, but it’s not quite as fluid in Hand of Fate 2. This is probably down to the massive difference in budgets, but it’s also down to the controls not being responsive enough; I often found my blocks not working because the game simply didn’t respond to the button press properly, which can be the difference between life and death. It’s not a game-ruiner, because you can soon fight your way out of a problem if you’ve got enough health, but it is a bit of a red flag.

These fights aren’t the main event really, as the majority of your time will be spent at the table, listening to the deep voice of your host. Hand of Fate 2 is almost like a digital representation of a pen-and-paper Dungeons & Dragons game, albeit with a rather extreme roleplaying flavour, thanks to the surroundings and the cosplaying dungeon master. It all adds to the unique atmosphere of the game. The way the cards work, randomly spreading across the table and forming the path on which your figurine will tread, means that no two playthroughs will be the same; you never know what scenario you’ll stumble upon, or if your dice roll will get you out of a scrap. The only thing you will know is what cards might come up, as you’ll choose from your deck before each challenge begins. The game doesn’t really have a proper story as such, but rather 22 separate challenges that can sometimes introduce you to new characters. These characters will be added to your card collection at the end of that challenge and can aid you in battle during subsequent challenges. Choosing the right one for your play style can be tough, mostly you’ll be doing all the work anyway, but they can also come with their own optional story cards. After each challenge, you’ll be awarded a new set of cards for your deck, much like with the character cards; you’ll choose a bunch of them before starting the next challenge, all of which can potentially appear as you play. These are sometimes weapons and armour, but mostly they will be scenarios against which to test your luck and skills. I’m normally a big fan of stories in games, and although Hand of Fate 2 has almost no overarching plot, the atmosphere and individual storylines within each challenge really held my interest and kept me playing.

Despite its weak visuals and repetitive gameplay style, Hand of Fate 2 is dripping with atmosphere and it’s something a little different in a world full of identikit shooters and whatnot. Releasing it during the busiest time of the year however, will do it no good at all.

A bit directionless
Combat can be awkward