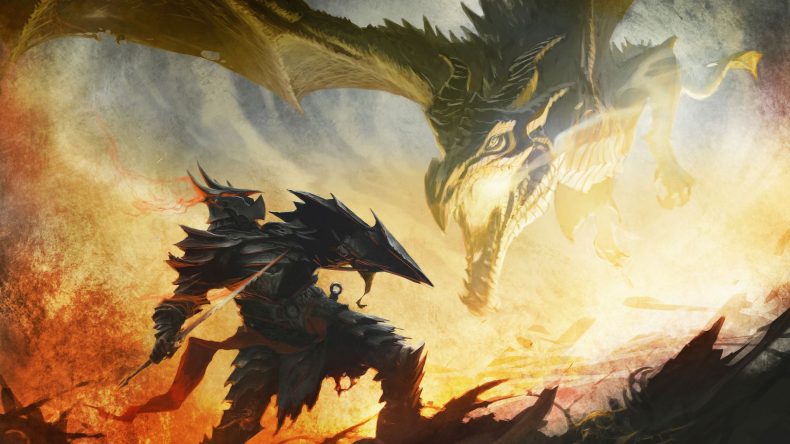 Is there a game more likely to draw equal parts elation and derision upon its mention than the fifth entry in the Elder Scrolls series? While Skyrim’s popularity is unquestionable, many seemingly hate it only for that popularity, or at least that its popularity has led to its release on no less than seven platforms since 2011.

Regardless, at least with releases six and seven, Bethesda are offering something a little different, not only providing players the ability take the behemoth RPG out and about with them on Nintendo’s hybrid handheld doohickie, but also – more pertinently for this review entitled ‘Skyrim VR’ – allowing them to truly see the snowy, mountainous ranges and perils of Tamriel’s Skyrim through their character’s eyes with PSVR. And while the move to VR is unlikely to change hearts and minds on Skyrim’s merits as a game – it’s entirely the same game after all – the venture into virtual reality should provide fans with a satisfying new perspective, albeit with a handful of minor issues.

Stepping into the world of Skyrim through VR for the first time is an extremely surreal experience. As always, the adventure begins with your avatar in an imperial prison cart bound for Helgen, delivering to them to their execution, just before a dragon attack offers them a reprieve and changes their destiny forever. As the wagon bumped its way down twisty trading routes, the new 360-degree viewpoint instantly allowed me to spot small details I hadn’t seen in previous playthroughs, such fauna gracefully dashing through the dense forest’s middle distance, while my fellow captives recounted their captures. As with any VR game with NPCs, I still find it incredibly weird to see virtual characters appear life-sized and equal in stature, not just looking at my character, but staring me right in the eye, which instantly helped to make me feel part of this rich fantasy world. What detracts from it slightly, however, is a combination of Skyrim’s age and the less-graphically intensive nature of VR experiences, both leaving Skyrim looking a little… dated. It’s still, ultimately, a 2011 last-gen game, and you might expect that it doesn’t look as sharp when compared to last year’s current-gen remasters or even the surprisingly graphically capable Switch version. Yet, sadly it also pales in comparison to other PSVR games, especially those specifically developed around virtual reality, which of course, Skyrim was not. Most other VR games tend to be smaller, more focused affairs and not 100-hour RPGs set in a sprawling open-world, though, which Skyrim most definitely is, so that sort of visual discrepancy should be expected and your mileage may vary depending on your expectations.

Even so, textures here can be even muddier than I’ve come to expect in VR, character models a little plainer, draw distances less impressive, while Skyrim’s infamous clunkiness – its stiff animations and minimalistic facial movements – can occasionally pull you out of the moment – at least until you’re full in the swing of things. While it’s not offensive to look at, it does mean that peaceful moments, like those spent in the open fields outside Whiterun, staring up at the towering mountains, simply wouldn’t have been as impressive as in other versions, if not for the fact that I was actually stood in the world, experiencing its true perspective.

That’s not to say that it never impresses visually or that it’s not still a great world to exist in. I mean, I spent an entire hour in Riverwood early on, just sitting and enjoying its peaceful river-side surroundings, which is something I’m inclined to do a lot more of when simply wanting to relax. The world’s architecture also takes on a whole new life in virtual reality; iconic Skyrim fortresses like Dragonsreach or the mountain-topping High Hrothgar are a real treat to experience in this way, and I found myself often ignoring characters and markers to thoughtfully stare up at expertly crafted towers or statues. Interiors fare a lot better, for sure, and are certainly more detailed than the wilds, so homes and guild halls really pop in VR, feeling more alive and lived-in, while dungeons too are a completely different prospect. They’re creepier, more choking than before, as you edge through dank, tight corridors, doing battle with life-size Draugr and other nasties. On that subject, as I find life-size NPCs a continually surprising prospect in VR, nothing could have prepared me for some of Skyrim’s larger creatures. Bears are bad enough, but seeing a giant charge at you is, to be blunt, terrifying, while spiders rearing up in attack position and looming over gave me – someone who suffers arachnophobia – genuine shivers, even with clunky animations. None of that really compares to the thrilling act of battling dragons, which is improved tenfold in VR, as they swoop, hover to rain fire down on you, and land to get in your face. It’s utterly fantastic, and just not something you can explain to people: screenshots and videos simply cannot do it justice.

Skyrim VR offers two different traversal options to get around its snowy landscapes, and both provide immersion, but in different ways and on different levels, and what you opt for requires a little trade-off.

The most publicised method has been the Move Controllers, allowing you to move your disembodied hands – and therefore your weapons – independently of each other. This, of course, allows you to really swing your sword (or at least a weightless facsimile), and bring up your shield to defend, which goes a long way to make you feel like your character. What’s really neat is that the hands of your character match their race. My Argonian warrior had leathery lizard hands, but as Skyrim never had what you’d call a realistic physics engine, you can’t do anything with them outside of fighting. You can’t pick up items as you could in, say, Batman: Arkham VR, and look at them, or even knock things off tables for the laughs; you can only look at something and select ‘pick-up’, and it gets added to your inventory as it’s always worked, and this is where it’s still Skyrim to a fault. Still, the only major downside to this method is that the only suitable way to move with the (now-ironically named) Move Controllers is to point and teleport via an arching line that emanates from your left-hand weapon, and that scratched out some of that immersion for me.

Of course, teleporting is nothing new in VR games, it exists as a mechanic mainly to assist those that might suffer from motion sickness, and I’m glad it’s in here from that point of view, but I found it a chore to navigate with, not only dampening my desire to explore, but also caused me some disorientation during combat when against multiple enemies. Just as annoying is that there’s no obvious way to step backwards with this method either, which is a bit of a pain in a sword fight, as you’re giving up a key way to dodge a blade. Worse still, it also rendered the climbing of some of Skyrim’s steeper ranges almost impossible, as mountainsides you could climb easily with an analogue stuck just aren’t workable, especially as there’s no way to ‘jump’ in this mode, and suitable ledges are often out of reach.

There is a real-time movement option buried away in the settings when using Move Controllers, but it’s likely buried for a reason. Sure, it allows you to constantly point at and walk towards a location, but I generally found it even more faffy than teleporting, and didn’t solve any of the issues I had in combat.

With that, the DualShock quickly became my preferred way to play, with Skyrim VR controlling comparably to Resident Evil VII, with the reticule moved simply by looking at things. Here, pretty much everything but the camera behaves as it does in the non-VR versions; you can move freely around the world in real-time using the left-stick, however, you do lose that ability to swing the sword. Instead, your in-game hands sit on the periphery of your vision but, overall, I much preferred that to teleportation. It’s a shame there’s not a more workable way to marry the two methods together, at least until Sony sees fit to provide updated motion controllers.

Be warned, though, this way might see you more susceptible to motion sickness, but it’s not something I’ve experienced in over 20 hours play, likely well assisted by the way that peripheral vision blacks out when you pick up any kind of speed.

As it is, Skyrim VR is unlikely to dislodge the Switch port as my current main avenue of replaying through this sprawling adventure, thanks in part to its lacklustre visuals and last-gen pitfalls, but that doesn’t mean it’s not been a worthwhile experience. The new perspective that VR provides to both Skyrim’s sense of scale and my place in its world cannot be understated and means that my desire to keep revisiting in virtual reality remains strong, even with those issues.

Whether it’s to whisk poor Lydia off on another dangerous, morally questionable misadventure, or just existing, sitting in one of Skyrim’s more serene locations to unwind, knowing that I can always jump in and experience one of my favourite videogame fantasy worlds, and through an inhabitant’s eyes, feels like a huge comfort.

It’s the same Skyrim you already love, but in virtual reality
Sense of scale and world presence is amazing
Buildings and dungeons have reinvigorated atmosphere
There be dragons

It’s the same Skyrim you already hate, but in virtual reality
Control schemes are a trade-off against your preferred type of immersion
Could look better

Knowing that I can always jump in and experience one of my favourite video game fantasy worlds, and through an inhabitant's eyes, feels like a huge comfort.