previous
Shiren The Wanderer: The Tower of Fortune and the Dice of Fate Review
random
next
Armikrog Review
0 likes 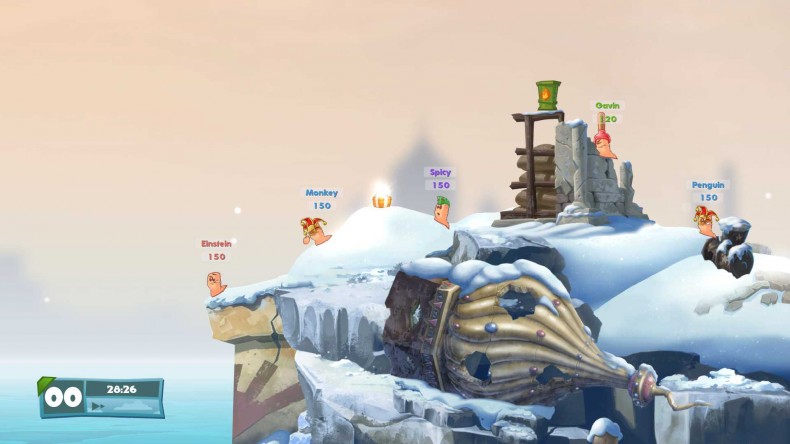 There are some franchises that barely require an introduction, whether you’re 30 years old or 13. Team17’s frankly legendary Worms series is one such. From humble 2D beginnings through ill-advised jaunts into 3D and even bizarre attempts to add a story mode, the lovably violent team game has endured where many other franchises have failed.

In W.M.D, the series has come full circle – almost – returning to the simplistic 2D fun that made it so popular in the first place. The campaign pits your team against increasing odds, usually with the straightforward objective each mission to simply wipe out your opposition. Secondary challenges such as not losing a worm or killing an enemy with a mounted gun turret exist to give you a chance to earn extra XP with which to buy cosmetic items for your team.

This is one of those games that treads a fine line between fun and frustration, as even some of the training missions (which, brilliantly, work as 3-star minigames and reward you with more XP) are pretty tough. One stray bazooka round or mistimed jump can waste a turn and leave your worms exposed, and it can be surprising how fast victory can turn to defeat. The AI gets increasingly more accurate and ruthless as the campaign progresses, and you’ll need to do the same to succeed. Bizarre weaponry has always been the cornerstone of this series, and while W.M.D doesn’t add a great deal of new items, the old favourites return. Trusty stalwarts like the bazooka and shotgun are present, along with the fireball, Dragon Punch and infamous Sheep Bomb. Blindly using any old weapon just because it’s funny (which you will) can only take you so far, and clever players and veterans know that there’s a layer of tactics beneath the surface that many overlook. Positioning can be key, and using the right tool for the job, avoiding splash damage or even knowing when it’s the right time to sacrifice one of your brave little invertebrates can be the difference between a fanfare and a row of little tombstones.

As with many games of its ilk, Worms excels when played against thinking human opponents. It’s here in the multiplayer that it’s bonkers creativity truly shines, as players come up with outlandish and downright devious ways to employ the off-the-wall arsenal. It’s much tougher against human beings, but ultimately it’s more rewarding and a lot more fun.

The big new addition this time around is the inclusion of vehicles. You can now drive tanks and fly helicopters, which sounds a lot of fun but it often isn’t. The tank is decent enough, mowing down enemy worms and obliterating the landscape, but the helicopter is heavy, fiddly and difficult to control. There’s a manic glee to be had from blowing the other team to bits with the powerful chaingun, of course, but it can be frustrating until you get the hang of it. Collecting wanted posters in missions unlocks special challenge stages where you must defeat what amounts to a boss – that is, a badass worm with specific weapons and tactics. The core gameplay remains unchanged here, but the strategies you’ll employ are different, and just finding the posters in the first place gives you something else to factor in while you advance your team across the field.

Customisation adds a bit of fun to proceedings. As always you can modify your team name and the handle of each individual worm, and you can select all sorts of things from their appearance and victory music to their voices, some of which are downright hilarious, even if they do begin to grate after a while.

Worms W.M.D doesn’t really do a whole lot different to the titles that have come before, but the few additions it brings are welcome ones, affording you news ways to experience the same effortlessly entertaining gameplay without disrupting the core experience. There’s nothing as intrusive as a proper story mode and, even though the vehicles take some getting used to, their inclusion feels almost like a natural progression. If, for whatever reason, you’ve never tried Worms before, this is solid place to start. If you have, well, you already know exactly what to expect.