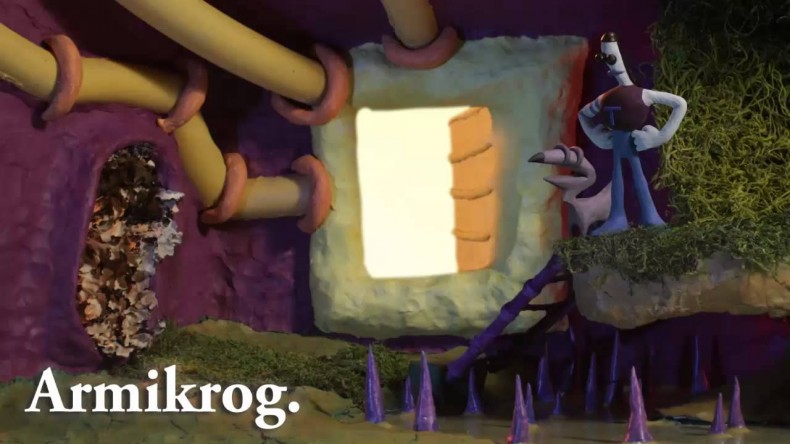 It should be made illegal for a game that has such a wacky, fun, bombastic introduction to then go on to be at best, plain dull and at worst, incredibly frustrating due to a complete lack of logic or excitement. But alas it isn’t and therefore Armikrog exists.

Armikrog is a claymation point-and-click adventure from the creators of Earthworm Jim, a combination which sounds great on paper, and it follows the story of an astronaut called Tommy and his weird dog Beak Beak, who’ve crash landed on a planet, I think, and now have to do something on it? Escape maybe? I’m not really sure, as it’s all just quite forgettable from the off-set. There might be something about Tommy’s home world coming to an end and his brother astronauts dying. I think. Maybe. As I mentioned, Armikrog does get off to a perfect start, opening with a catchy theme song that gives off strong vibes of 90s Saturday morning cartoons, and I actually thought I was going to be in for a treat. The song sets a fun tone and makes it seem that Armikrog will be a mad, enjoyable ride, but that feeling quickly disappears, even if the music does consistently remain really good and quite unique.

With Armikrog being a throwback to the point and click adventures of old, it’s certainly reminiscent of classics like Day of the Tentacle and Grim Fandango with the absurdity of the puzzles. But what Armikrog does is prove just how well those two and other classics were made, as even if you were never able to solve one of their puzzles, when you finally found out the answer it did (in the majority of cases) at least make a degree of sense. In Armikrog there is no rhyme, reason or logic to any of the puzzles, and if it wasn’t for a guide I’d still be on the very first one. It expects you to jump through hoops and be able to read the developers’ minds, because there are no clues on the screen as to how you get to the places where different puzzles are, let alone be able to actually solve them. Then even when I cheated to find out the answers to the puzzles, they were just so dull and uninspiring that it felt pointless even doing them, because there was very little reward in terms of story for doing so. I’m all for developers looking into the past and being inspired by classic genres of old to create new things, we all love that nostalgia buzz, but advances in game design and theory really should be fused with the styles and genres of old. The puzzles in Armikrog are just plain bad, and there isn’t even an in-game hint system to help solve them.

One saving grace, along with the great soundtrack, is the wonderful art style that even gives Wallace and Gromit a run for its money. The claymation looks really good in Armikrog, and every character looks cool and different. The cutscenes are also really well done, as they have that nice stop motion look that’s satisfying to watch. The art styles often change too when you enter some specific rooms and tunnels and they help to keep things interesting and fresh. A really bright colour palette and lots of weird and imaginative creatures, like a bug with pincers that is also Abraham Lincoln, do make the world of Armikrog interesting to be in at least, it’s just a shame that the monotonous puzzles let it down. Armikrog could have been really good, especially with the people behind it, but a complete lack of logic in the puzzles and the little reward for actually completing them made it frustrating to play. If you want to dive back into the past or you’re looking for a new point and click adventure that will get your nostalgia sensors tingling, then you may well get something out of this, but you should probably just go and play one of the classics instead.

Monotonous puzzles that have no logic
Uninteresting story
Just bad

A wonderful claymation art style and a unique soundtrack aren’t enough to save this point-and-click adventure from its own monotonous puzzles and uninteresting story.

The Banner Saga and Armikrog heading to Playstation 4

Armikrog is the New Project from Earthworm Jim Creator