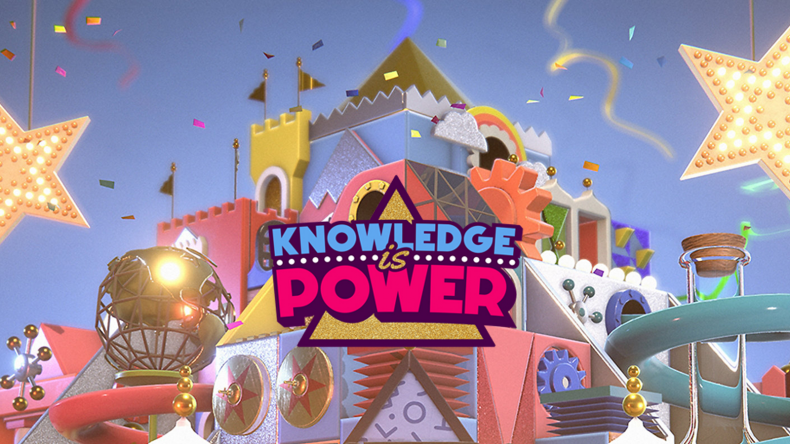 The PlayLink initiative has seen Sony release a few games now – not all of them a hit, but at least they’re trying to push the boat out when it comes to originality, even if you’re not a fan of how you have to play them. Knowledge is Power is a fairly simple quiz game, focused on distracting your opposition with a range of items you can use, set upon a colourful aesthetic not dissimilar to Tearaway. It’s a good one to whack on when the family are in need of something to do, but the repetition does start to grate after a while, and even though it may be paced a million times better than That’s You!, it’s not as fun as the Buzz! days of yore.

You play through a range of questions that give you four multiple choice answers, and once you and your friends have made a decision on the category, you’re given the chance to select a weapon, of sorts. The thing is, the category can be overridden if a player chooses to take control, so just when you thought that question on the 80s is about to pop up, Charlie Big Pants gets his question on US TV Shows. If the option to take control doesn’t present itself, majority rules and the more people playing and selecting the same category, the likelihood the favourite will be chosen. Once the subject has been decided, you’ll all get to choose from a range of items known as Power Plays that can be used to put off your opponents from selecting the right answer; Gloop covers all four answers, so you’re having to wipe it away on your phone to reveal the choices. Ice will freeze over the answers so you’re having to tap them to break through to select them, Bombles are electrified and can temporarily cut out your time, and Critters eat a few of the letters in each answer. If you’re flagging behind your opponents, you’ll sometimes be rewarded with two of these Power Plays, but I found many of the answers were pretty easy, so these Power Plays only ever prolonged you clicking the right answer. You gain points for getting the right answer (obviously), but also being the quickest. It all helps you to get a good starting point on the final stage, but more on that later.

Seperating chunks of these multiple choice questions are these sections where you have to pair answers together, such as the quotes of characters in movies and the films they’re from, and also a bit that has you choosing whether the answers supplied are from one thing or another. For example, I had to decide whether the song titles given to me were sang by either Beyonce or Rihanna (a subject I was surprisingly decent at). They help to break up the same style of play, and can help to bag you a few more points along the way.

When you get to the final round, you have to reach the top of a pyramid, and depending on how well you’ve done up until this point, you’ll start higher up or lower down than your opponents. As questions fly in, you’ll jump higher up if you answer them faster, and getting them wrong means you don’t progress any higher up. This can be quite tense, especially if you’ve managed to stay particularly close to your opponents throughout the game.

Knowledge is Power has a gorgeous style to it, and is very appealing to the kid inside. It may be pretty easy to play, but it’s good fun. The phone app is responsive, giving me no issues when answering the questions, reacting to the Power Plays, and playing the in-between minigames. It won’t have you playing for hours on end, but when it’s paired with the other PlayLink games, you’re guaranteed for a pretty decent evening.

Questions are rather easy
Quite repetitive

Knowledge is Power is a good quiz game, but it does feel repetitive after a while and should probably be enjoyed when sandwiched between other PlayLink titles